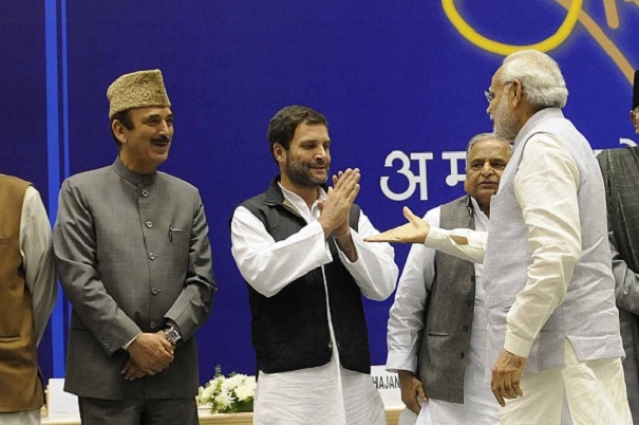 Even today, in a post-liberalization India, Congress and Left leaders have preferred to prey on the insecurities of backward classes rather than look to make them a part of any aspirational growth story.

Ever since he entered the political arena, Rahul has made no secret of his desire to recapture the Dalit vote-bank for his party, which he, rightly but slightly simplistically, believes is key to the Congress’ revival in the Hindi heartland.

The Dalits were a key component of the unbeatable Congress arithmetic during the times of Rahul’s forefathers. The nineties saw them, along with the Muslims (who were another key demographic of Congress loyalists), migrate away from the Grand Old Party.

Yet, fortunately for the Congress, this migration was not towards the BJP but regional formations like the SP, BSP and RJD. The fact that the BJP was not the natural beneficiary of these migrations allowed the Congress to continue to play up its supposed stature as the only Indian party with a ‘national’ reach, even when they were out of power at the Centre.

Ever since they lost this large chunk of their electorate, the Congress’ strategy at the national level has revolved around two major factors – its so-called ‘secular’ credentials which made the Congress an easier party to ally with for regional players who depended on the minority vote and the supposed ‘limited’ appeal of their chief rival, the BJP.

Until the early nineties, the ‘limited appeal’ of the BJP was said to be restricted to the upper castes and middle classes, primarily in North India. What the proponents of this theory meant to say was that even if the BJP did manage a healthy increase in vote percentages and a sizeable Lok Sabha tally, it would never come close to becoming the premier national player that the Congress was.

But the first major expansion of the BJP base, with the rise of powerful leaders from the OBC community like Kalyan Singh and Uma Bharthi, burst this particular bubble and the saffron outfit rode to power at the Centre winning three General Elections in a row.

Nevertheless, even during the heights of the Vajpayee years, the punditry unrelentingly revolved around the idea that the ‘Brahmanical’ and ‘North Indian’ inclinations of the party’s ideology would continue to keep the BJP restricted to certain geographical and social sections of India. The electoral losses the BJP suffered in 2004 and 2009 only served to reinforce the narrative that while the BJP had solidified its position as the major national rival to the Congress, it still had a long way to go in order to match the Congress’ ‘national appeal’.

But the election results of May 2014 showed the Congress and its ‘secular’ allies that the winds had begun to change in India’s electoral arithmetic.

Statistics from the 2014 election demonstrated that the BJP had made significant inroads into several key demographics, most of which were never seen to be natural BJP voters, like the Yadavs, Marathas, South Indians, Tribals and Dalits.

The increasing popularity of the BJP amongst the last two demographics would have been the most worrying for the party’s opponents – because it flies in the face of numerous leftist political and social theories revolving around the caste system which have been written with the sole purpose of deriding the BJP, the Sangh Parivar and the larger Hindu society.

In actuality, the major reasons for the BJP’s expansion into these sections of the electorate are twofold. The first is the appeal of the Prime Minister- whom the OBCs, Dalits and other backward castes saw as one of their own. The second is the unwavering ground work done with these sections of society by the party’s ideological mentor, the RSS. Both of these factors are ones that the ‘secular’ intelligentsia choose to ignore and the ‘secular’ parties find almost impossible to replicate.

The expansion of the BJP’s base amongst Dalits and Tribals holds deep implications for all its political opponents – the Congress, regional parties like the BSP and the ideologically Left formations.

For the Congress, it will mean that the BJP will consolidate its current position as the premiere national party in the country and further expanding the gap between the two rivals. For parties like the BSP, it will be a matter of their very existence.

And for the Left, currently battling for electoral relevance while still carrying some measure of ideological influence among the glitterati, the movement of the vote of the ‘underprivileged masses’ towards a party they regard as both communal and bourgeois’ would mean the death kneel to their already floundering credibility as a political and ideological force.

This explains the desperate scrambling of political leaders to the Hyderabad University campus and the Parliamentary disruptions which will inevitably follow in the Budget session. Amongst all this political melee, it would be worth considering what vision these major political players have in mind for the Dalits if they managed to get their support.

During the last week of December 2015, Prime Minister Narendra Modi inaugurated a meeting of over 1000 Dalit entrepreneurs organized by the Dalit Industrial Chambers of Commerce and Industry (DICCI).

In his speech at the event, largely ignored by the media and major political parties, the Prime Minister told the audience that ‘this Government is your Government’.

The prime minister said that his Pradhan Mantri Mudra Yojana (PMMY) has given Rs 50,000 crore worth of loans to 80,000 small entrepreneurs, with most of them hailing from the backward castes. He also said that he aims to double the number of Dalit entrepreneurs in the next two years, adding that his wish was that Dalits become job givers and not job seekers.

Invoking Dr Ambedkar numerous times in his speech, the Prime Minister told the audience of Ambedkar’s belief in industrialization and private enterprise, using the iconography of Ambedkar as an aspirational achiever – one who broke the shackles that held him back and became the architect of the Constitution of the world’s largest democracy.

The Prime Minister’s ideas and vision for Dalits are in sharp contrast with the narrative that both Rahul Gandhi’s Congress and other parties of the ‘secular’ ilk have tried to build over the years. For decades, the Congress and their comrades have seen Dalits as helpless objects of pity, preferring to cultivate them as a vote-bank using the difficult history of the Dalits as a mode of ghettoization and then, luring them with the promise of reservations and freebies.

Even today, in a post-liberalization India, Congress and Left leaders have preferred to prey on the insecurities of backward classes rather than look to make them a part of any aspirational growth story. This is why the tragic events at the Hyderabad University managed to galvanize their energies but the congregation of successful Dalit entrepreneurs at the DICCI event did not.

There is little doubt that the tragedy at the Hyderabad University will be used by the BJP’s political opponents for another bout of grandstanding during the coming Parliament session and that it will require some smart political management from the party to blunt the impending attacks.

Nevertheless, one hopes that beyond the hollow cacophony of millionaire, ‘socialist’ politicians crying crocodile tears for the backward classes, what will endure will be the unrelenting groundwork of the ‘karyakartas’ and the Prime Minister’s plan to transform India’s underprivileged from job seekers into job givers.