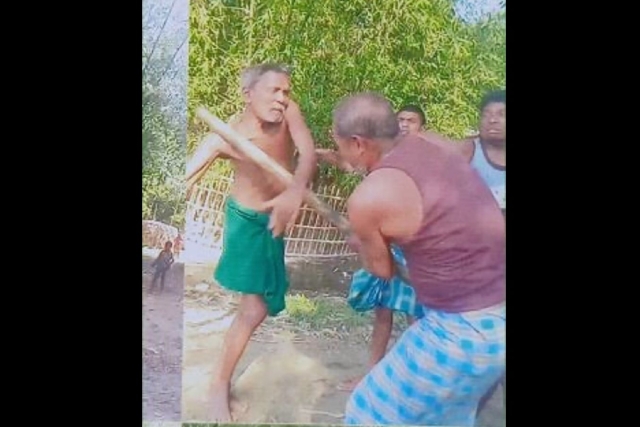 A photograph of the assault as shared by the Dalit family. Sarvlal Harijan is in green lungi.

Recurring allegations by Hindus living in Muslim-majority clusters accusing Muslim neighbours of indulging in mob violence on the slightest of provocation or pressuring them to accept Islam should evoke government concern.

Instead, what’s repeatedly seen is that the police file a counter case against the Hindu families and thus evade action on either side. Is it mob pressure?

This correspondent has covered several such cases. Many of these involve Dalit Hindus. Read here, here, here and here.

A recent case in Bihar follows the same chronology. The National Commission for Scheduled Castes (NCSC) has now intervened in the case, after the Dalit family, with the help of some activists, approached the body making serious allegations against the police.

Till Agniveer exists, no life can be so cheap, no criminal can go scot free, no policewala can think of being gunda. The Scheduled Caste commission has taken up the matter as MOST IMMEDIATE. Let police answer commission now. pic.twitter.com/NjA4Tbntp9

Below are the contents of the application sent by the family to the NCSC a week ago. It’s in the name of Rajkumari Devi, 25, who belongs to Hadi caste and is a resident of Dubaili village in Purnia district in Bihar that falls under Dagarua police station.

The letter says that around 4 pm on 2 June, a pig owned by her family wandered into the house of her neighbour Mohammad Ashfaq. Two men, Mohammad Mintu and Mohammad Nazin – both sons of Mohammad Israel – stoned the pig to death. On learning about it, Rajkumari went to Ashfaq’s house and confronted the men.

She asked them why they had to kill the poor animal when it was a means of livelihood for the Dalit family.

In return, the Muslim men hurled casteist slurs at her, calling her ‘Hadin’ and ‘Domin’. They went on to molest her. They tore her sari and blouse. She screamed, but the molesters gathered a mob of Muslims.

Rajkumari’s father Sarvlal and her elder brother Makkhan also arrived at the spot. The mob thrashed them all with lathis, bamboo sticks and iron rods. Sarvlal sustained serious injuries and had to be taken for immediate treatment.

The family first went to one Katihar hospital. When Sarvlal’s condition worsened, they took him to a private hospital where doctors advised the family that they should take him to Delhi, saying that chances of his survival were negligible. The family could not afford to go to Delhi and brought the man home. On 5 July, around 11 pm, Sarvlal died.

The letter further says that even after a month has passed, the police have arrested no one from the Muslim family and, instead, filed a counter case against the Dalit family in order to shield the accused and dismiss the case.

Read the letter below:

Rajkumari’s sister-in-law and Makkhanlal’s wife told Swarajya over the phone that a few men and women from the Muslim family inflicted wounds on themselves and went to the police immediately after beating Sarvlal.

“The police did not even come and talk to us before accepting their complaint. The FIR is wrong,” she said.

Santoshi said that around 10-12 Harijan families live amid a hundred Muslims houses in the village. The Muslims hurl casteist slurs at them all the time and, when the Dalits object, they tease them saying they should convert to Islam if they feel shamed for being addressed by their caste.

She also said that Muslims routinely mock the Hindu ritual of cremation and ask the families to adopt the Muslim way of burial.

After the incident, she said, the Muslims have boycotted the Dalits.

“They are neither giving us work in their fields nor selling us any goods from their shops. Even for milk, our children are forced to go to adjoining villages,” she said.

The NCSC letter seems to have woken the administration into some action as, on 22 July, the deputy police chief of Baisi informed the Purnia superintendent of police (SP) that the process of monetary compensation to the Dalit family was initiated on 20 July.

The letter by the Baisi cop to Purnia SP, which is in response to the NCSC notice, has been accessed by Swarajya.

The letter says the police are yet to receive postmortem report of the deceased and the accused in his case are absconding.

Sarvlal’s son Santosh, who is younger to Makkanlal, told Swarajya over the phone that the police should have added murder charges by now, but have not done so as they are shielding the Muslims.

He also said that he has learnt that the postmortem report reveals serious injuries on his father’s body, but the police are refusing to give the family the report.