On the First Day Of The Year, Modi Shows Intent To Make It His Own 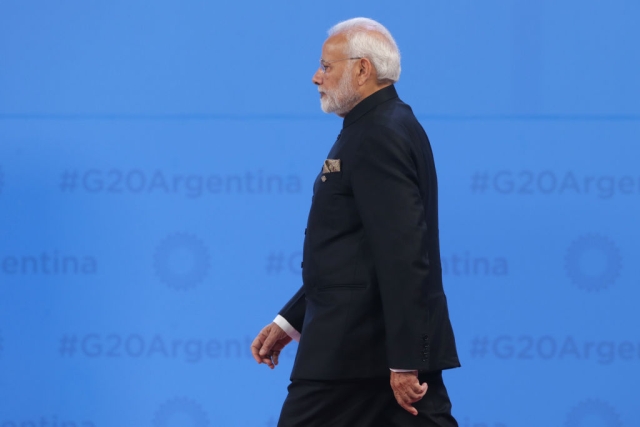 2019 is an extremely important year for the future of India - this is something that people of all sides have spoken of. The Bharatiya Janata Party (BJP) and its supporters look at it as a year in which the opportunity to script history presents itself to them. Never before in the history of India has a non-Congress government served its full term and come back to power.

On the other side, the Congress and its ecosystem are as desperate as fish out of water. Although the recent victories in some states have raised their spirits, they have never felt as flustered as they have in the last four years.

So, in 2019, every side was expected to shift gears and get ready for the day of reckoning. Even as this was happening, the chief protagonist of this situation, as is his usual practice, pulled a surprise out of his hat.

Narendra Modi's no-holds-barred, tough but dignified, interview has sounded the bugle that 2019 is here. No important topic was left out - Ram Mandir, Sabarimala, farm distress, loan waivers, economic offenders, Rafale, you name the issue and it was touched upon.

Yet again, Narendra Modi has shown keen intent to seize the narrative at the right moment. As many have said, it is not just what is said that matters but when it is said that matters. Just when some began to say that the opposite side is running away with the narrative, Modi has surprised everyone. In that sense, Modi has chosen the perfect timing to speak. Nobody will forget that the Prime Minister gave an important interview on the first day of the new year - instant recall is assured. That is Modi's timing.

Equally important was what he spoke. There were takeaways for every stakeholder in the political process irrespective of whether they are ranged against Modi, for him or neutral.

If you are a party that is standing in the bandwagon against Modi, he made it clear that you're either corrupt or are allying with the corrupt. He also said that the coming election would be the people against the 'alliance', which meant that Modi is – as he has done over the years with great success – positioning himself as an outsider representing the common people challenging a powerful elite.

In fact, he even mentioned that he was an outsider to the Lutyens elite in his interview. Despite almost five years in power, this is still a narrative that Modi can own because the Congress ecosystem's attack on him has devolved into personal attacks many a time. Take any newspaper and you will see many of these ‘alliance’ leaders abusing me in different words but what is their vision for the nation, asked Modi.

Moreover, when the people look at the contrast on offer – a man whose family still lives humbly, a man who has run a five-year government without a hint of corruption against those who made enough for generations and are still promoting their own families, it is easy to see which way the pendulum will swing on this issue.

For Modi’s fellow partymen and his supporters – both online and offline – this was a rallying cry. There were signs of restlessness, more online than offline, on whether Modi has his finger on the pulse of the moment. All those nerves would have now been calmed and doubts laid to rest. The message is now clear for the BJP and its supporters on most issues that matter, going into a big election year.

Especially heartening to many would be his replies on the Ram Mandir and Sabarimala issues. He took a nuanced but clear position that has already enthused many among his supporters. Yet again, just when many commentators thought that these are issues that Modi would never speak on, here he was, jolting them from their smugness, conveying that only he decides what to speak and when.

For many of his supporters, the most likeable quality of Modi is his combativeness and that was seen in good measure. He spoke of how the ‘First Family’ that literally ruled India for generations is out on bail.

When asked if the Modi wave had waned, he replied with thanking those who were saying this with accepting that there was a Modi wave in the first place, and reminded that this very set of people were claiming there was no Modi wave earlier.

Elsewhere, he called the opposition’s alliance as ‘centralised corruption’ meaning that all the corrupt parties had come together and attacked the Congress for having the temerity to speak about institutions after having damaged every institution of consequence. This was vintage Modi.

On the one hand, there is Modi who is speaking of real progress in 24/7 power to households, healthcare, structural reforms in agriculture, clean governance and strong national security. He is also willing to stand up and be counted issues that matter to our civilisation.

On the other hand, is a group that is happy adopting scorched earth policies, lying big, willing to burn down anything, including the economy, defence preparedness, international relations and the judiciary, just to defeat Modi.

But as the first day of 2019 showed, for those not particularly aligned to any side but willing to go with whoever is ready to convince them, the choice is clear.