Pedophrasty At Shaheen Bagh: Why The Zealots Are Exploiting Babies For Their Misguided Activism 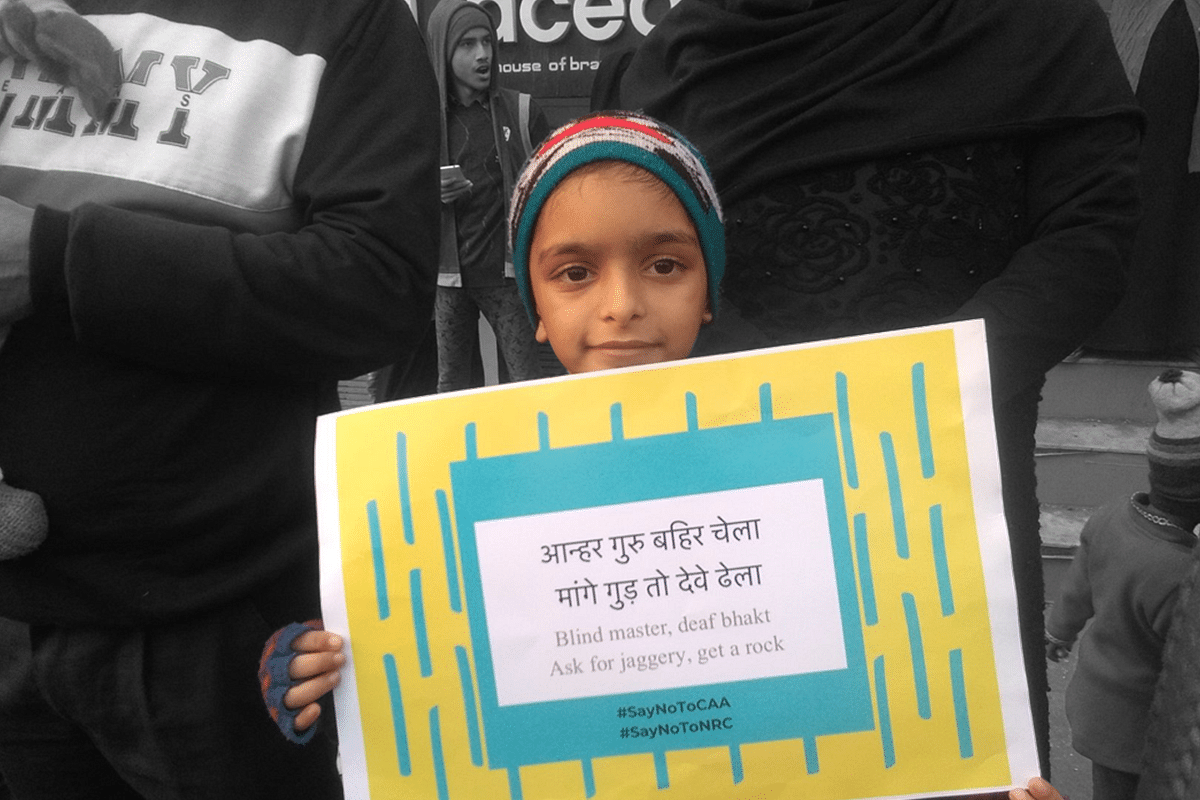 Protest against the Citizenship Amendment Act.

This Delhi cold has claimed one more life. A toddler is dead. But the cold was just the weapon. The killers unfortunately were people and disgustingly enough, his own parents. His mother kept taking the four month old infant to the protest site at Shaheen Bagh and exposed and subjected vulnerable and fragile being to harsh winters repeatedly.

But the parents have no regrets. They are ready to go back to the protest site for more dharnas. Allah giveth and Allah taketh away, we are told. The child is a martyr in the eyes of their parents and the community. A poor soul who can’t even pronounce ‘m’ of that martyr has been sacrificed.

While the closet bigotry of those protesting against Citizenship Amendment Act (CAA) was never in doubt, a few would’ve thought that this hate would translate from opposing a law which gives a minuscule relief to those fleeing persecution to such a level where they wouldn’t mind martyring their own kids for the sake of their misguided activism.

But should we be surprised? Maybe the mother is inspired by Islamic prophet Ibrahim who was ready to sacrifice his son Ishmael on God's command. It is no news to anyone that the martyr complex is one of the chief features of Abrahamic faiths. Catherine Nixey, author of ‘The Darkening Age’, explains why martyrdom by Christian zealots in Roman Empire made rational sense.

“Martyrdom held considerable benefits for those willing to take it on. In a socially and sexually unequal era it was a way in which women and even slaves might shine. Unlike most positions of power in the highly socially stratified late Roman Empire, this was a glory that was open to all, regardless of rank, education, wealth or sex.”

The position of women in Muslim society today is worse than those women in Roman Empire. “In martyr poems, mothers watch the martyrdom of their children with eager relish. In one story, a mother rejoices that she has borne a son who will die a martyr and, embracing his body, congratulates herself on her offspring,” Nixey recalls one of the tales of martyrdom.

Such tales from Abrahamic faiths abound. But let’s set aside ancient history for a moment and come to modern times.  Using children (or their images) to further one’s activism and agenda has become a dangerous trend these days.

Injecting children into debates on complex issues has been weaponized by propagandists to make the other side suspend its judgment, make it appear insensitive even if it responds with more rationality and better arguments. This is the ultimate and most effective tool in the atrocity propaganda that is in vogue these days.

The Western pro-war ecosystem has used children to the hilt for making a case for toppling Bashar Al Assad regime in Syria. Many journalists and activists have been caught red handed in the past indulging in such unethical behaviour. Take the famous hoax of gay girl in Damascus.

During 2011 Syrian Uprising, an American Tom MacMaster invented a fictional character by the name Amina from Syria, created a name in her blog, presenting her as a lesbian. MacMaster posted on the blog as Amina’s cousin who wrote how Amina had been abducted. This led to a lot of outrage in Western media. Later, it turned out, this was all a hoax and the image used of Amina on the blog was really that of a Croatian woman living in Britain.

Since then, it's been raining propaganda out of Syria, propagated by so-called Syrian rebels opposed to Assad’s regime and allied with the US forces. The aim is to appeal to western audience to put pressure on their governments to intervene in Syrian war to topple Assad (or justify the intervention at the very least for such interventions have become difficult given how the US establishment invaded Iraq on completely fabricated allegations cooked up by US State department and propagated by US mainstream media).

Rewind back a bit and we have the famous false testimony of Nayirah, a 15 year old girl who told the Congressional Human Rights Caucus in 1990 that she saw ‘Iraqi soldiers take babies out of incubators in a Kuwaiti hospital, take the incubators, and leave the babies to die.’

George HW Bush administration used it to justify its support to Kuwait against Iraq in the Gulf war. Two years later, it was revealed that it was a classic propaganda cooked up by US and Kuwait governments and Nayirah was none other than daughter of Kuwaiti ambassador to the US.

Rewind back some more. Author and Journalist Malcom Gladwell in his book ‘David and Goliath’ tells a tale from the Civil Rights Movement in the US from the 1960s. “The most famous photograph in the history of the American civil rights movement was taken on May 3, 1963, by Bill Hudson, a photographer for the Associated Press. The photo was of a teenage (black) boy being attacked by a police dog.”

“The next day, the New York Times published it (the photos) above the fold across three columns on the front page of its Saturday paper, as did virtually every major paper in the country. President Kennedy saw the photograph and was appalled. The secretary of state, Dean Rusk, worried that it would “embarrass our friends abroad and make our enemies joyful.” The photo was discussed on the floor of Congress and in countless living rooms and classrooms. For a time, it seemed like Americans could talk of little else.”

But it was all a craftily staged act. Wyatt Walker, a close aide of Martin Luther King had mobilised children from high schools in Birmingham, gathered them at a park in hundreds, knowing fully well the local Police didn’t have resources to control the crowd and would be forced to use the water hoses and dog squads which they did. The photographer was arranged. As the act played out, the photo of a dog lunging at a 15 year old child was captured. It made history.

The use of children in activism circles is ubiquitous now. Malala Yousufzai and Greta Thunberg are only the latest but also the most successful examples of this trend. Given how widespread this phenomenon is today, Author and Philosopher Nassim Nicholas Taleb has coined a term for it: pedophrasty.

He defines it as, “Argument involving children to prop up a rationalization and make the opponent look like an asshole, as people are defenseless and suspend all skepticism in front of suffering children: nobody has the heart to question the authenticity or source of the reporting. Often done with the aid of pictures.”

In layman’s terms, it “Can also describe the exploitation of babies by professional beggars who rent them from their parents and use them as potent appendage in their trade (remember that children tend to grow and need to be replaced).”

Pedophrasts prey on our maternal (and paternal) instincts, Taleb writes.

Despite the recent setbacks, the zealots would continue to employ children to further their narratives and goals. For pedophrasty is a potent tool. This is tragic enough. But what is more deplorable is the conduct of the influencers in the society - the media, intellectuals, celebrities who wield popular influence, etc - are first one to get influenced by such atrocity propaganda. This is what makes matters worse.

As Taleb writes, “Pedophrasty has its most effects on actors, journalists and similar types who are intellectually insecure, deprived of critical judgment, and afraid of being classified as violators of some norm of political correctness.”

What’s the cure for not falling prey to pedophrasty and succumbing to political correctness? Courage. But as Taleb says, courage is the only virtue you cannot fake.