Politics Over Rescue Mission: Machiavellian But Not Tamilian 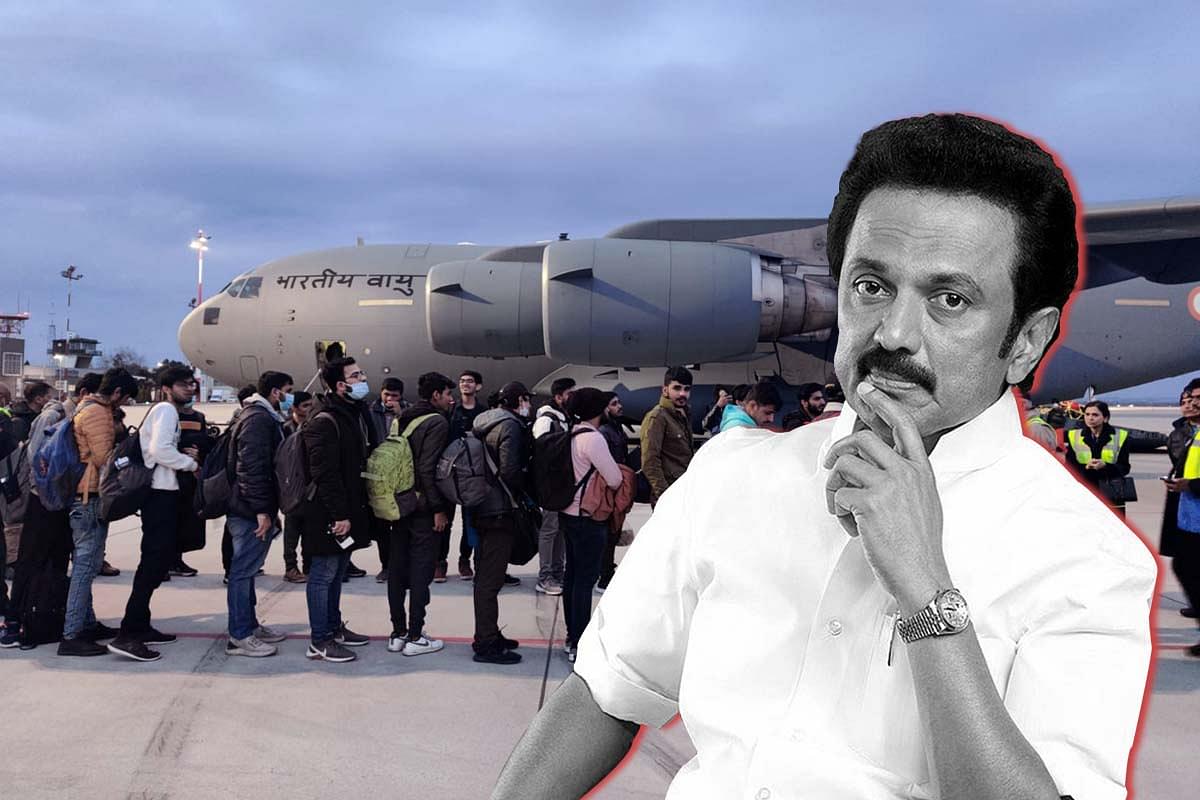 Tamil Nadu Chief Minister M K Stalin has demanded "to increase the number of Tamil students to be evacuated from Ukraine by focussed intervention".

As the Russian-Ukraine war intensifies, the Indian government is undertaking the onerous task of evacuating and bringing home around 20,000 Indian citizens, mostly medical students, who are caught in the conflict zone.

At a time when the central government is working with a single-minded determination, Tamil Nadu Chief Minister M K Stalin has demanded "to increase the number of Tamil students to be evacuated from Ukraine by focussed intervention".

Wrote to Hon'ble @DrSJaishankar requesting him to increase the number of Tamil students to be evacuated from #Ukraine by focussed intervention and sought MEA clearances for the team proposed by GoTN to coordinate with the Indian embassies in Romania, Poland, Hungary and Slovakia. pic.twitter.com/175b3qthcB

According to the Tamil Nadu government, its control room has received 3,025 telephone calls and 4,390 emails from the Tamil students and Tamil diaspora in Ukraine. Based on this, the Tamil Nadu government wants to launch its own rescue and coordination mission comprising Dravida Munnetra Kazhagam's (DMK’s) Members of Parliament Trichy N Siva, Kalanithi Veerasamy, M Abdulla, and MLA T R B Raja along with four IAS officers.

According to the Tamil Nadu government, there are 2,223 students in Ukraine (which is actually 14 per cent of the diaspora) whose details they have given to the External Affairs Ministry.

This is being at looked at as a political gimmick rather than a genuine effort to help the students. In fact, such gimmicks at the theatres of operations of evacuation will create confusion. If each state government were to do the same, it would create chaos and unnecessary misery for the students.

But it seems like the Tamil Nadu Chief Minister is being 'Machiavellian' here — quite an Italian influence.

It appears that he wants to assert 'Tamil separatism' at every opportunity. In the current scenario, it seems that he is aiming at creating a feeling that somehow the central government is not caring enough for students from Tamil Nadu. But consider the numbers. Of the 2,223 students from Tamil Nadu, 193 students have been rescued at the time of writing. From Gujarat, the home state of the Prime Minister, of the almost 3,000 students stranded, those rescued so far are 107. There is no discrimination either against Tamils or against Gujaratis or against students from any other state. The government of India is seeing all the students as only Indians.

There has been widespread condemnation and righteous indignation at the tweet of the Tamil Nadu Chief Minister. A netizen has pointed out how carefully the Chief Minister, who otherwise calls himself as belonging to the ‘Dravidian stock’, has framed his tweet: ‘not students from Tamil Nadu but Tamil students.’ Does this mean if a student is a Malayali or Telugu but who resides in Tamil Nadu then he or she can be excluded from that rescue mission that Tamil Nadu Chief Minister is planning?

But the real tragedy is that the Tamil Nadu Chief Minister has chosen a time of human misery and suffering to play politics, and this to the detriment of those who are working overtime to avert any further misery to Indian students.

Kerala Chief Minister Pinarayi Vijayan, a Communist and an opponent of the ruling political dispensation, wrote to External Affairs Minister S Jaishankar on 23 February informing him that 2,320 students from his state were stranded in Ukraine along with other Indians and sought the ministry's "urgent intervention to ensure their safety and to make arrangements for their safe return". Note that even he did not ask to ‘increase’ the number of Malayali students. On 3 March 2022, according to pro-CPI(M) daily The Hindu, "chartered flight arranged by the State government brought in 166 students from Delhi and 15 students from Mumbai, apart from 12 students who had already boarded the flight to the State from Delhi on Wednesday". The newspaper further reports:

Though the chartered flight was arranged by the State government to bring them back here, the evacuation flight is part of the Indian Government’s Operation Ganga to bring back its nationals from war-torn Ukraine following the Russian invasion.

Given the track record of this government in rescuing all Indians and even foreign nationals at times of such traumatic periods as in the case of ‘Operation Raahat’ or through Vande-Bharat missions, it is indeed painful that such a situation has been created by politicians, that one has to explain the non-parochial nature of central government’s rescue missions.

The demand of the Tamil Nadu Chief Minister shows the real nature of Dravidianist politics which is in its core is racist. But let the people of India be told that the culture in Tamil Nadu and the eternal values that form the core of Tamil society are, as elsewhere in India, not these. We reinforce the mighty statement of Maha Upanishad that the world is our family, with the Sangam verse that states that ‘all world is my native place and all humans my kin’. Most probably, a Tamil student, rooted in his Bharatiya culture, would rather give his own seat to a fellow non-Tamil in a rescue mission, than demand preferential treatment for himself. After all, did not the poet Puranaanooru define the code of conduct for Tamils thus:

The world exists because of those who would not eat even the Amrita of Indra for themselves … who work tirelessly for the welfare of others never caring for their own selves.

The tweet of the honourable Chief Minister of Tamil Nadu indeed would make a Machiavellian prince proud but will shame deeply a true Tamilian.