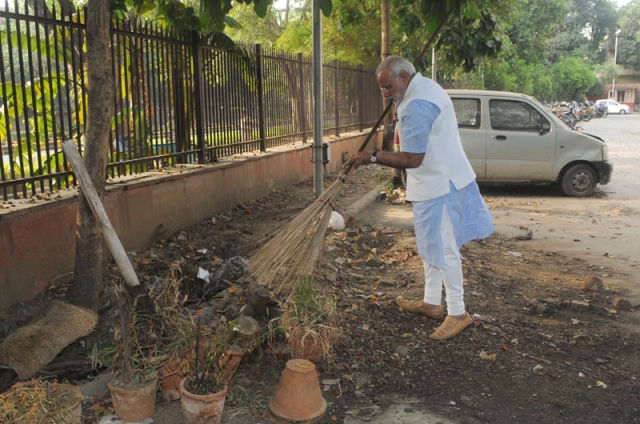 When Narendra Modi government took office on May 26th 2014, the massive mandate was essentially for development. A corruption-free India with a fast growing economy is what Indian society expected from the newly-elected government. As such environment was not central in this mandate.

Projects had been stalled in the name of environment or populism by the previous government. With utter lack of co-ordination and each ministry wanting to take full advantage of its ability to block the other departments of the government, the ministry of environment had become a useful stick to stall any project. It has been stated that, road projects worth 20,000 crore were awaiting clearance from the Environment Ministry of the UPA regime. At one point, the then National Highways Authority of India Chairman expressed dismay in a letter to the Minister for Roads, Transport and Highways of UPA over the “misplaced enthusiasm” displayed by the environmental ministry in blocking clearances through convoluted guidelines and frequent changes in rules.

The malaise transcends UPA. A good example of how the Ministry of Environment was more a political stick to beat the opponents than really serve the environment and sustainable development is the brazen way in which T.R.Balu, the minister for environment in the NDA regime, came up overnight with the an amendment that took away from the state government the authority to sanction projects over Rs 5 crore in coastal areas. Everyone knew that the amendment was to stall the moves of the Tamil Nadu state government, then headed by J.Jayalaithaa, and not out of any real environmental concern. Similarly the environment ministry under UPA regime gave consent to the economically unviable and ecologically destructive Sethusamudram Project.

Thus if anything the ministry has been more a political tool, a veritable breeding ground of crony capitalism, which in turn is the illegitimate child of state socialism, than a real player in ecological conservation with a holistic approach to sustainable development.

Prime Minister Narendra Modi has unveiled a new vision that cuts across such a compartmentalized approach to environment. He is perhaps the first Prime Minister who has seen humans as part of the environment and the need to disentangle the messy interlink our socialist state had created between bureaucratic narrow vision, political vested interests and crony capitalism that naturally benefits from both. So the focus has been on emerging green technologies. The government has been promoting both Indic green technologies and India itself as a vast potential market for emerging green technologies. Instead of making the nation a prisoner of agreements to cut the greenhouse gases which often end up as tools to arm-twist the economies of post-colonized nations, Modi has positioned India as a huge market for innovating and disseminating green technologies.

This is evident from the way the European players and US are showing high interest in financing India’s green energy programmes which Modi government has been promoting. According to Bloomberg New Energy Finance the Modi effect has also increased investment in renewable energy from US $1 billion (Rs 5,895.27 crore) in 2013 to US $7.9 billion (Rs 48,211.69 crores) in 2014.  US President Obama has been quick to sense this link between renewable energy initiatives and India’s renewed combative stand in the international summit discussions on climate change. He wrote: “India is ready to expand its use of renewable energy as a way to reduce greenhouse gas pollution, a signal that his government is moving towards joining an international deal on global warming.”

Modi government got U.S. agencies to commit about $4 billion for solar energy based ‘Make in India’ projects. The U.S. Trade and Development Agency had committed $2 billion in loans for solar energy along with $1 billion in lending from the U.S. Overseas Private Investment Corporation. The U.S. Export-Import Bank will also lend out $1 billion to subsidize India’s solar development. This is part of the well calculated yet ambitious project of the Prime Minister to make green energy work for rural Indian households. The next seven years will attract $100 billiion towards India’s solar energy projects.

So Modi has introduced a game-changer for the developing countries in the North-South politics of cutting green-house gas emissions. Instead of yielding to the pressure of cutting down green-house gas emissions, which essentially involves ineffectual state intervention, Modi aims to generate 100,000 megawatts of solar power and 55,000 megawatts of wind power, which will be as effective in fighting global warming while accelerating the economic growth.

Modi government has also been busy  garnering support from every quarter it can muster. During Modi’s France visit, Francois Hollande announced €2 billion in clean energy and efficiency funding for India. In a very important statement, Hollande pointed out the importance of India for the 2015 climate talks to be held in Paris  and expressed the willingness to fund the pet-projects of Modi including smart cities, renewable energy technologies and nuclear projects. Even with China, India has managed an understanding on ‘bilateral partnership on climate change’. With the coming of the crucial global summit meet on climate change, China and India have called for the ‘multilateral negotiations to achieve a comprehensive, balanced, equitable and effective agreement under the UNFCCC ( United Nations Framework Convention on Climate Change)’ and take into account the ‘domestic steps’ India and China are taking up.

It is in this connection that one needs to see the call by Arvind Subramanian, government’s chief economic advisor, for India to take a strong stand on climate talks, “confidently and constructively, based on a series of green actions domestically (by India) that contrast with regressive inaction by advanced countries”. The stage has been meticulously set from the very beginning of the Modi government take over. It was not for nothing that Modi changed the very name of the ministry of environment and forests into the ministry of environment, forests and climate change. If and when India succeeds in setting the agenda in the coming Paris climate summit meet, it will usher in a new green politics and economy at global level for the developing countries in particular and the planet in general.

Meanwhile Modi also launched the Clean India campaign. Good hygiene and the need to make Indian human environment as clean as the natural environment is another important vision of Modi. While the danger of the whole movement becoming another sarkari sponsored photo-op of politicians exists, it also has the genuine possibility of turning in to a people’s movement. In quantifiable terms, the project aims to build over 800 million toilets along with modern sewage systems and eliminating open defecation that dangerously pollutes Indian human landscape.  And this has the capacity to give a boost of Rs. 1.65-2.2 lakh crore to the economy. In his independence day speech itself, the Prime Minister, often stereotyped as a rightwing jingoist, elaborated the need of toilets :

The entire campaign had translated into a total of 31.83 lakh toilets built between April 2014 and January 2015, which is 25.4% of the target for 2014-15. Once again to make it a real movement the Modi government will have to go for a decentralized system of private-state partnership and employ a variety of toilet technologies. Gandhian institutions like the Kumarappa Institute of Technology at Wardha with their toilet parks can provide the needed technological pluralism for this ecologically crucial project of Modi. The need for the system change is reflected in the statistics of the project. For Independence Day 2015, the target is 2,57,008 new toilets in schools, (out of which 102,717 are for girls). A total of 14 corporates such as Tata Consulting Services, Mahindra Group and Rotary International have come forward and pledged to construct 3,195 new toilets. The rest are supported by 71 PSUs (86,781 new toilets), and by the state governments under the Sarva Shiksha Abhiyan and Rashtriya Madhyamik Shiksha Abhiyan schemes.  Present rate of construction is a mere 8000 toilets per month and at the current speed it is estimated that it would take 32 months to achieve the target set for 15th August of 2015.

The ambitious Integrated Ganga Conservation Mission called “Namami Gange” has an allocation of a sum of Rs. 2,037 crores. In addition a sum of Rs. 100 crores has been allocated for developments of Ghats and beautification of river fronts at Kedarnath, Haridwar, Kanpur, Varanasi, Allahabad, Patna and Delhi in the current financial year. For the first time a holistic approach that combines, tourism, hygiene, river conservation, urban and rural sewage treatment, monitoring bio-diversity of the river etc. has been launched. For example, it is not merely stopping the discharge of sewage into the river through the enforcing authorities but the project envisions ensuring 100% sewerage infrastructure in identified towns and villages alongside Ganga.

The project aims to synergize the cultural connectivity every Indian feels with Ganga with digital connectivity through which Indians throughout the world can be united. Again, if and when successful, this will be a major eco-project that shall set the direction for the cleaning of world rivers flowing in highly populated areas particularly in developing countries.

So for the first time an attempt is being made to set the ecological conservation and socio-economic development in synchronized move. At three vital fronts Modi is experimenting: one, making India a formidable eco-voice in global climate politics with a blue-print for green energy at domestic level: this is indeed a brilliant use of globalization to the advantage of developing /post-colonized nations; two : shifting the focus equally to the human ecology and the challenge of hygiene – trying to make it a people’s movement; thirdly: using cultural capital and connectivity to initiate a global movement of Indians to clean a river that is the lifeline of a civilization and one fourth of the people in the planet.

For a government that is one year old – setting such a green agenda both globally and locally is in itself a great success. In another year we will be able to tell how much Modi has succeeded in his ambitious agenda and his triumph will be in the best interests of the future of not just India but of the entire developing world.