The Curtain Falls On Theatrics In Tamil Nadu Politics 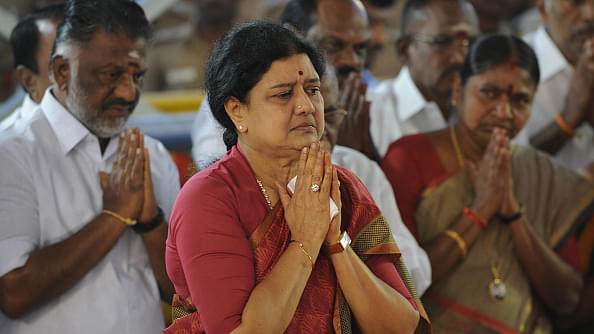 Sasikala and Panneerselvam paying their respects at the memorial for Jayalalithaa after Sasikala was elected party general secretary. (ARUN SANKAR/AFP/Getty Images)

Politics in Tamil Nadu has always been intertwined with theatre and films. The political history of Tamil Nadu since 1967, when the ruling Congress was voted out and a Dravida Munnetra Kazhagam (DMK) government was installed, has all the ingredients of a film drama. There are heroes, heroines, the other women, villains, character artists and, of course, the omnipresent villains. With the demise of J Jayalalithaa on 6 December last year and the hospitalisation of M Karunanidhi (94) immediately after, Jayalalithaa’s passing has robbed two leading artists of the drama which was unfolding in the centre stage of Tamil Nadu’s politics.

Though there is another film personality in Tamil politics by the name of Vijayakanth, who is out to capture power with a political outfit called Desiya Murpokku Dravida Kazhagam (DMDK), the latest grapevine from the state is that Vijayakanth’s chief ministerial dreams may end more to the tune of Vijay-can’t!

If you think that the days of theatrics and drama in Tamil Nadu are behind us, you are mistaken. The real drama began on 7 February, when the then chief minister O Panneerselvam, who only a couple of days ago had tendered his resignation to the Governor, drove down to Marina Beach, where Jayalalithaa has been interred, and sat in meditation for nearly 50 minutes. Later, Panneerselvam told reporters that he was communicating with the spirit of Jayalalithaa about the recent developments in the All India Anna Dravida Munnetra Kazhagam (AIADMK) and the government. In a startling revelation, he announced at the beach that he was forced to sign the letter of resignation by V K Sasikala and her close relations after summons to the Raj Bhavan.

The chief ministerial ambition of the interim general secretary, on the other hand, came crashing down on 14 February, when the Supreme Court upheld the 2014 September verdict delivered by Michael John DaCunha, the then Special Court judge, sentencing Jayalalithaa, Sasikala, Ilavarasi and Sudhakaran in the disproportionate assets case to four years’ imprisonment and fines ranging from Rs 100 crore to Rs 10 crore.

Sasikala had staked her claim to form the next government in Tamil Nadu as she had been elected as the legislature party leader of the AIADMK. But Governor C Vidyasagar Rao, on the advice of legal luminaries, decided to wait for the Supreme Court to pronounce its verdict in the appeal filed by the Government of Karnataka against the Karnataka High Court order quashing the Special Court verdict in the case.

With the Supreme Court quashing the Karnataka High Court verdict, Sasikala had no choice but to surrender before the Special Court and for incarceration in Bengaluru. On 15 February, Sasikala set out for Bengaluru city. Her first place of call was the spot in Marina Beach where Jayalalithaa is interred. Accompanied by close relations and the members of the Thevar community to which she belongs, Sasikala stood before the memorial, muttered some words and, to the shock and surprise of the viewers watching the proceedings live, slammed on the marble plaque with her right hand not once but thrice. Her Thevar relatives cheered on and cried as if they were setting out for war.

Till date, nobody knows what Sasikala said at Jayalalithaa’s memorial. Some in the media have reported that her act was reminiscent of pledges taken in battlefields or graveyards by the relations or friends of a king or warrior who was killed by their enemies.

But that was in Tamil classical works. Silappatikaram, the all-time classic in Tamil literature authored by Ilango Adigal, recites the act of revenge by Kannagi, an embodiment of womanhood and dedicated wife whose curse obliterated the Madurai dynasty, which had executed her innocent husband Kaavalan for a crime committed by someone else.

Then there are movies in Tamil like Panchali Sabatham (translated as ‘The Vow Made by Panchali), based on the Mahabharatha, where Panchali takes a vow that she would oil her head only with the blood of Dushasana, who had humiliated her in the royal court.

But the act of Sasikala has no similarity or connection with the incidents mentioned in Mahabharatha or Tamil classics. Such acts referred to in the classics were vows or pledges taken to avenge the killing of a king or ruler or warrior. It has nothing to do with one’s personal grief. Panchali’s pledge was in retaliation for act of demeaning womanhood.

Uma Anandan, an activist and avid reader of Tamil classics, said what Sasikala did at Jayalalithaa’s memorial was nothing but an act rooted in personal issues. She said,

She was cursing Jayalalithaa, whom she considers as the sole reason for her imprisonment. This act brought to mind the kind of behaviour shown by underworld dons who make vows to finish off somebody. What Sasikala did at the memorial was not a noble act. It caused only apprehension in the minds of the people. Sasikala claims to be a politician and was all set to become the chief minister of the state. This act does not augur well either for Tamil Nadu or for Sasikala.

Not just scholars like Kalyanaraman and Anandan, but even the youth who look towards politics with hope and aspiration were taken aback by Sasikala’s act. K A Johny, a keen observer of Tamil politics and culture, said,

I’ll never term it a good act. Her slamming the marble plaque was a kind of message directed at her rivals and enemies. The message has created repercussions in the minds of those who oppose and challenge her superiority. Otherwise there was no need for such an act.

He also pointed to the fact that Sasikala had been sentenced in a case in which she was one of the prime accused.

The disproportionate assets case resulted out of the crimes committed by the four accused in the case. With the Supreme Court pronouncing the verdict, the matter has come to a logical conclusion. The accused were sentenced because the court has understood that they have committed a serious crime and hence the punishment. There is only one person against whom Sasikala can make a vow. Against Sasikala herself. Because she herself is the problem. Intertwining and comparing her act of slamming the tomb with incidents mentioned in Mahabharatha and Tamil classics like Ponniyin Selvan and Silappatikaram is a travesty of truth.

P S It is time politicians in Tamil Nadu come to terms with the fact that theatrics has come to an end in the state with the exit of Jayalalithaa and Karunanidhi from the centre stage. The younger generation is slowly taking over the South Indian state. Styles have to change, attitudes have to change. Or else, the main artists would be forced to make a hasty retreat.