The Terror Strike At EDI: Dangerous Portents Of Pakistan’s Desperation 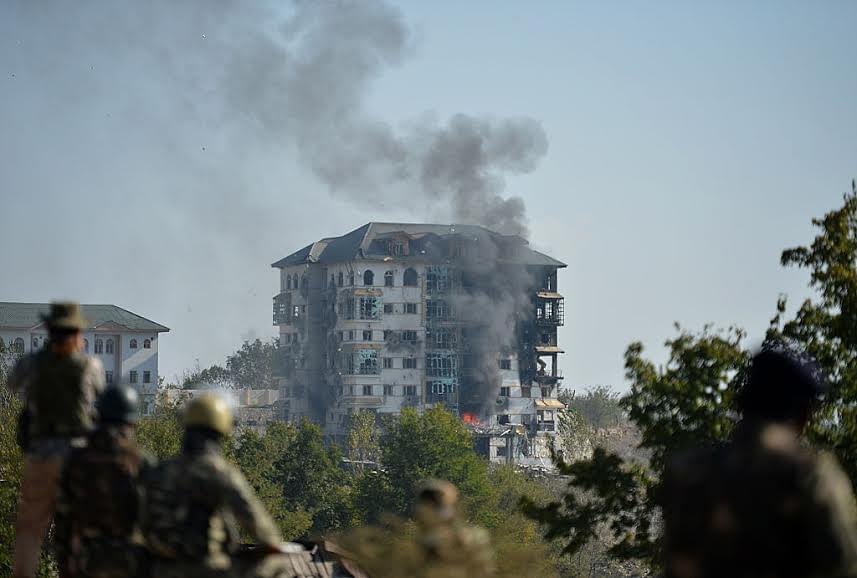 Indian paramilitary troopers during the gunfight.

The clock appears to have turned back a couple of years; this happens in India Pakistan relations ever so often. The manifestation is felt most in J&K. There are trends of the past which return to haunt the political, diplomatic and security establishments but memories are usually short and leaderships change hands. That is why it is important to recall the past and examine the new to synthesise the two in order to obtain a better picture for our response.

Post Uri and the surgical strikes Pakistan is obviously seething. The Pakistan Army and ISI have assumed full control of foreign and defence policy, no longer leaving even a sham projection of civilian control. Linking Afghanistan to peace in Kashmir and such absurdity comes from the cupboard of the deep state and is being roundly criticised by all; it is an attempt to obfuscate. Gen Raheel Sharif, in possibly his last few weeks in charge appears to be floundering. It’s a situation gone awry where options are many but the end results do not appear to be plausible successes the way the deep state had visualised.

The surgical strikes has upset certain things; Pakistan’s diplomacy failed, leading to its increasing isolation. Its own media developed feathers and reported that the civilians were getting restive too, demanding that action be taken against the ‘friendly terrorists’ to give the citizens and the nation a modicum of respect and esteem. In such a confusing situation the best bet for Raheel Sharif was to go on an offensive. The only way he could is with the help of the strategic assets the deep state has developed. That is why the rapid attempts to target the Indian Army and make statements with actions such as the EDI attack. A big success is what he is seeking and his final decision to stay or make way will largely depend on that. The greater a villain he is considered by India the larger his image and post retirement persona, if at all.

The EDI strike by the LeT and the earlier two at Baramula and Langaiyat were in quick succession to keep the wagging tongues in Pakistan quiet as Raheel looks for options and probably approves the choice of objectives; the response is now on an extended window of opportunities. Resident Pakistani terrorists inside the Valley appear to have been told that they must recover the lost pride after the surgical strike which in spite of a very experienced public relations organisation (ISPR) and its efforts, has exposed the Pakistan Army.

Baramula was ham handed, Langaiyat was the handiwork of the Rajawar brigands but the EDI strike was better thought out and more in the suicide mode as escape was impossible. These were not newly infiltrated terrorists. Which goes to prove that even with the low footprint Pakistan is willing to take the risk to motivate the local street and align itself behind it. That is the cost it is willing to pay and hence the seriousness and the desperation. No doubt the public relations effort will focus on the destruction of the EDI building to project that the Indian Army is hell bent to destroy every vista of education and employment opportunity of the Kashmiri youth. However, this does not cater for one thing and that is the strength of the moral domination of the Indian Army, none of which has been eroded.

In dire need people still come to the door of the Indian Army because they know it is inherently kind and helpful. The quantum of support the youth of the valley has received in the field of education from the Indian Army is not realised by people in the rest of India. This is the time that the Army must speak of all the Goodwill Schools, the Youth Guidance Nodes (YGNs), the skill development programmes, the efforts at job hunting, the computer centres it has set up, the national integration and aspiration tours it has organised and the general shoulder it has lent to the efforts despite years of militancy.

The EDI strike is likely to be a trailer creeping to a situation which Pakistan appears to be building towards; a bigger strike. Badami Bagh is at risk as much as Avantipur’s Victor Force HQ, both locations well known to me personally, having served there extensively. Recall of 1999 may help compare precedence.

In July 1999, the Musharaf Plan lay in tatters at the heights of Kargil, the Pakistan Army was disgraced. In response it hit back with vengeance. In the third quarter of 1999 the Valley experienced a large number of incidents of ‘fedayeen’. The first big blow was the attempt to penetrate Badami Bagh. The Defence PRO was killed but the action was contained by the Army. Subsequently a car bomb struck the Batwara gate of Badami Bagh killing soldiers on duty. The Army had a temporary setback before it took defensive measures and went on the offensive. It was fortunate that it had an entire reserve division in the Valley that pre-winter season and could undertake operations to bust many hideouts in the upper reaches and the jungles. Although it achieved very little in terms of terrorists killed, the destruction of winter infrastructure, sustenance and habitat resulted in terrorists operating out of built up areas. Victor Force of the Rashtriya Rifles (RR) went on a virtual partridge hunt that winter as intelligence flowed in like a stream. So is this the kind of mayhem that Raheel wishes to create? If so, it is old wine and the cadres are insufficient.

Returning to the EDI firefight and engagement, the terrorists chose their objective well and approached it from the river rather than from the regular entry near the National Highway. The real aim was to engage the Army and impose maximum casualties when the intervention operations began. They never did. In a calculated and sensible move the Army used available means to neutralise the terrorists, showed no urgency this time, preserved its resources but caused immense destruction on the building. I fully endorse this approach but found social media with a difference of opinion and queries being asked as to why modern means of anti-terror technology is not available to the Indian Army.

Suggestions were made for thermal screening of hideouts and precision strikes. This building is strewn with windows and is six levels high. Sniper operations are possible but with little guarantee. Thermal screening of an entire building and that which is difficult to approach due to open ground and minimal cover is well-nigh impossible. Efforts with smaller drones were made but on date armed drones are yet to reach service. The solution was simply – wait and watch, let the stamina drain and the effect of exhaustion seep in. There will be more of these as we approach winter but securing the high profile objectives will be a challenge.

Much will of course depend on the outcome of the next few attacks to predict the extended future. It will also decide Raheel's own future.