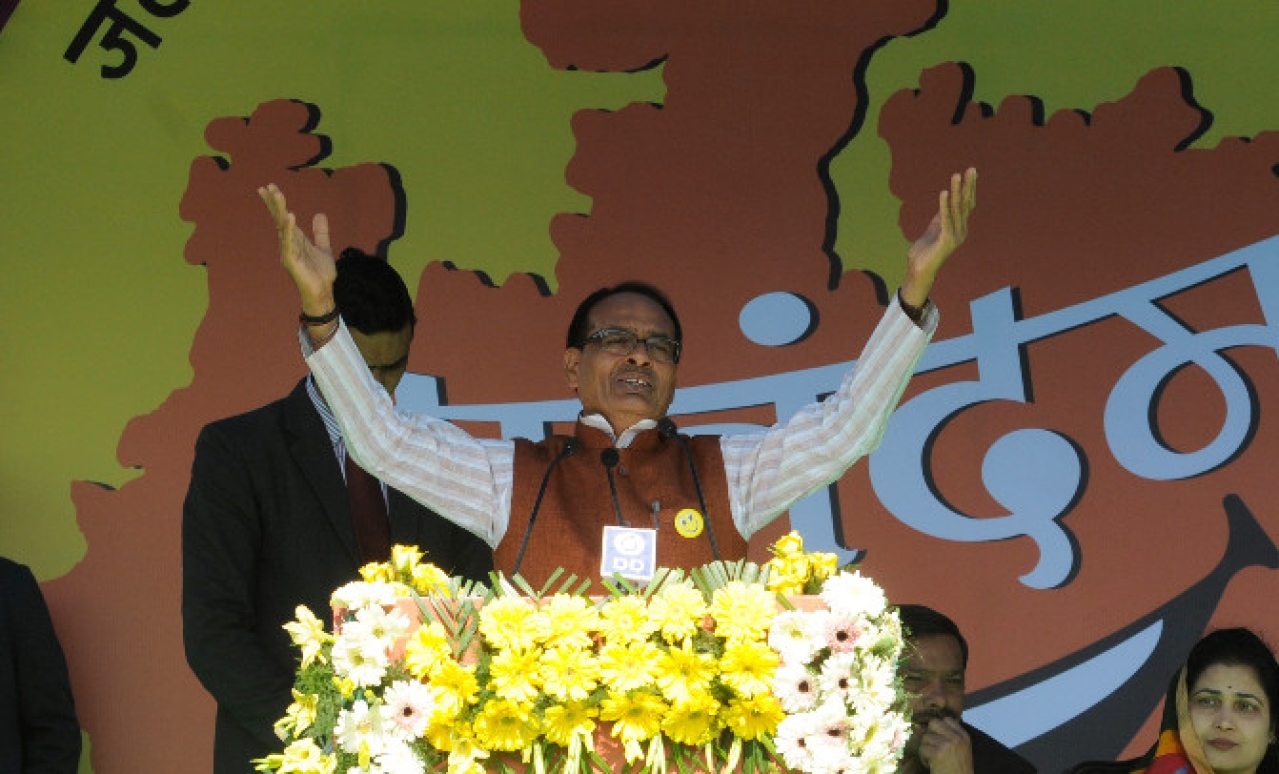 Madhya Pradesh (MP), which has witnessed tremendous agriculture and economic growth in the last decade, but is still catching up on human development parameters, is in the midst of an intense electoral campaign. Madhya Pradesh will vote to elect its new government in a few days.

The Bharatiya Janata Party (BJP) has been governing the state for fifteen years now, after the Congress had a ten year run. Chief Minister (CM) Shivraj Singh Chouhan is fighting tooth and nail to get a third full term for himself. The Congress is led by the unifying - or divisive, depending on who comments - leadership of veteran leader Kamal Nath and Jyotiraditya Scindia.

The BJP shocked all poll pundits winning 165 seats in the 2013 state elections. CM Chouhan was under pressure then as well, but he led from the front, clocking a huge victory, significantly improving his 2008 victory margin. This big win came on the back of a fantastic electoral performance in the Malwa and Nimar regions. The BJP won 45 out of the 50 seats in Malwa and 11 out of the 16 seats in the Nimar area, creating a moat Congress could not breach.

As the 2018 elections loom large, the 66 seats in Malwa and Nimar are again in focus. Neither Scindia nor Nath are big names in this area. Digvijay Singh, the best known Congress face in the region and ex CM for a decade, has hardly campaigned.

On the contrary, Chouhan has some adjacency advantage, with his Sehore origins, a city not too far from Malwa. And the BJP also has Kailash Vijayvargiya, the party’s national general secretary, who belongs to Indore, back in the hunt in the region. These 66 seats may again determine who takes over the reins in Bhopal in December.

Malwa and Nimar areas are different from the rest of the state in a few important aspects. Collectively, this region borders Rajasthan, Gujarat, and Maharashtra. The politics in these states also reflects in the political trends in Madhya Pradesh. Malwa and Nimar areas also have slightly different caste composition than the rest of the state, which has 22 per cent Schedule Caste and 15 per cent Schedule Tribe voters. These areas have relatively high population of upper caste Hindus, while some seats are completely tribal voter dominated. Finally, trading and services have a greater role in economy relative to other areas in the state.

Each of these factors influences the local politics strongly. Couple of years ago, Mandsaur saw Congress-led protests because it is a tri-state area. The Patel agitation in Gujarat built on these protests last year. The introduction of Goods and Services Tax (GST) would have necessitated huge operating changes for the small businesses in Indore, the commercial capital of the state. The transport industry, which thrives in the region located on the Mumbai-Agra National Highway with onward Delhi connectivity, has been protesting against fuel price hikes and goods transportation rules related to GST waybills.

And then there is the BJP dominance of this area through 1990, the first time the party formed its government in the state. Several seats in the six elections (1990, 1993, 1998, 2003, 2008, and 2013) since have had same legislative representatives, so there is an element of anti-incumbency against several individuals, if not the state government.

If the BJP has to win again in Madhya Pradesh, it will target at least 49 seats out of 66 in this region, a loss of no more than 7 seats. There are several interesting battles brewing up for both sides to concentrate on. The following is a list of intense elections both the BJP and the Congress will fight -

Barwani (Khargone); 1/1; BJP; Congress: This seat was carved out in the 2008 delimitation. Both the parties have won it once, with Congress the incumbent. This is the area where the new Jay Adivasi Yuva Shakti (JAYS) party is planning to contest. The Congress has been in talks with JAYS for an alliance. A tri-party contest may just benefit the BJP.

Bhikangaon (Khargone); 4/2; BJP; Congress: The Congress won this seat against the tide in 2013 with a narrow margin. The Gandhi family seems to love this seat. Indira Gandhi spoke here eight days before her assassination. Rajiv Gandhi famously spoke about the corruption in central programmes in Bhikangaon. Sonia Gandhi promised a farm loan waiver here in 2013. The Padlya village here even has a temple dedicated to Indira Gandhi.

Depalpur (Indore); 4/2; Congress; BJP: This seat has flipped every election since 1993 and is heavily Patel-dominated. BJP is the incumbent and may have to find a stronger candidate to challenge Satyanaraya Patel, a Congress heavyweight.

Garoth (Mandsaur); 3/3; Congress; BJP: This is one of the seats which the BJP captured from Congress as its strength grew in the state. Yet, due to the Patel agitation and also due to high number of Yadav votes on this seat, both parties have relative strengths to capitalise on.

Indore-3 (Indore); 3/3; Congress; BJP: This is the traditional upper caste seat of Indore, representing the area where the city was found 300 years ago. BJP won in 2013 after a three-term Congress rein.

Jhabua (Ratlam); 2/4; Congress; BJP: Jhabua is a tribal district, which has been a traditional Congress stronghold. However starting 2003, the BJP has made some inroads, especially in the Jhabua city area. The party won 4 out of the 5 seats in Jhabua district in 2013, won the Ratlam seat in the 2014 Lok Sabha elections, but has since conceded ground back to Congress. Retaining this assembly seat will be crucial.

Kasrawad (Khargone); 2/4; BJP; Congress: Home to the Congress strongman Subhash Yadav, the BJP could not hold on to its 2008 win on this seat. Arun, son of Subhash Yadav, was once the rising star in Rahul Gandhi’s plans to promote young blood. He was discarded earlier this year. If he does not play ball in the campaign, Congress is unlikely to retain this seat.

Manasa (Mandsour); 3/3; Congress; BJP: Barely 30 kms from the Rajasthan border, Manasa may be influenced heavily by the political winds in Chittorgarh more than those in Bhopal. Uma Bharti’s breakaway party Bharatiya Janshakti Party spoiled the game for the BJP here in 2008 and the 2009 Lok Sabha polss. Since then the party has consolidated its presence and will look to hold this seat.

Mahidpur (Ujjain); 4/2; Congress; BJP: The local Congress veteran Kalpana Parulekar had defected to the Aam Aadmi Party before the 2014 Lok Sabha elections, but returned to Congress. There is clamour in both the parties to find fresh faces for this seat, and both sides have a problem of plenty to resolve.

Nagda-Khachrod (Ujjain); 3/2; Congress; BJP: This industrial belt has voted for a different symbol every election since 1980. This swing seat will likely see new faces from both the parties.

Rau (Indore); 1/1; BJP; Congress: This seat was carved out in the 2008 delimitation and will feature Congress state working president and Digvijay Singh confidante Jitu Patwari. BJP needs to find a new face to mount any reasonable challenge to Patwari who will start as the frontrunner.

Sailana (Ratlam); 1/3; Congress; BJP: A seat reserved for Schedule Tribe, BJP has only won once here in 2013. Congress will fight hard to win this seat back. The party has worked with a local strongman Prabhudayal Gehlot since 1967. His son lost the election in 2013, but will reclaim his stake on the family bastion.

Sanwer (Indore); 4/2; Congress; BJP: Like Depalpur, this seat has also flipped every election since 1993. This seat has seen rampant urbanisation in recent past. The BJP has relied on a locally strong family since 1980 on this seat. It remains to be seen if this Sonkar family has retained its influence with changing demographics and urbanisation.

Sonkatch (Dewas); 3/3; Congress; BJP: Home to the Congress strongman Sajjan Singh Verma, BJP will try to retain this seat, where it narrowly won in 2013, but extended a big lead in the 2014 Lok Sabha election.

Suwasra (Mandsaur); 4/2; BJP; Congress: A traditional BJP area, the party surprisingly lost a close election to the Congress in 2013. This is one of the four seats Congress holds in Malwa and with extensive focus on agrarian distress and Patel agitation, the party will look to extend its upper hand.

Additionally, the BJP has to guard against anti-incumbency in some key seats which it has won with ease in the past. Some of its key names may not find the going easy. Mahendra Hardia (Indore-5), Deepak Joshi (Hatpipliya), Lokendra Tomar (Mandhata), Nagarsingh Chouhan (Alirajpur) and Paras Jain (Ujjain Uttar) are some of the key names facing local resistance. Similarly, Congress leader Bala Bachchan may find winning from Rajpur in Barwani district tough.

The BJP will look to leverage the fact that the Congress is rudderless in Malwa and Nimar. If the BJP continues its 2013 and 2014 Lok Sabha dominance in the region, it should prevail easily in the state. But if it runs into unresolved localised issues leading to voter disenchantment, it will find retaining the state tough, as upside from any other region is difficult.

An earlier version of this piece was published as 'Madhya Pradesh at 62 looks at 66 Malwa and Nimar seats to decide the 2018 election' on 1 November 2018.