Time to Dismantle Stranglehold Of Sugar Politics In Maharashtra 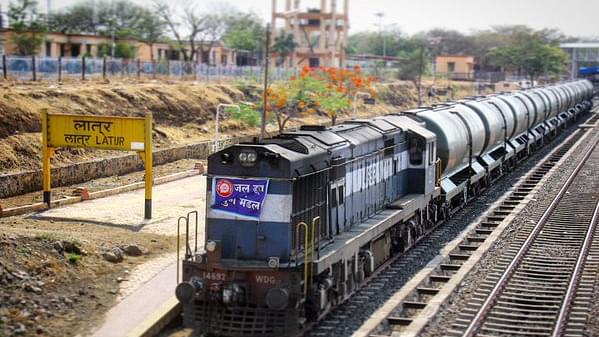 The drought situation is so bad this time that the state government is transporting water to Latur via trains. (Image: CM Fadnavis’ Tweet)

A Mumbai High Court order to shift the games of the 9th edition of Indian Premier League (IPL) out of Maharashtra has sparked a debate on water management in the state. The focus is on the sugarcane, which occupies less than 4% of the cropped area, consumes 70% of the state’s irrigation water. This article by Vivek Kaul brought out the contrast between the end use of water in IPL vs. the sugar industry:

It is easy to argue that sugarcane is not the right crop for the rain shadow region. But the industry did not rise systematically just because the farmers were making good money on the high yield cash crop. A deep political patronage network controls and influences policy on pricing and operations at various stages of the ‘farm to molasses’ value chain.

The sugar cooperatives came into existence soon after independence – a result of five years of struggle led by eminent economist D.R. Gadgil and industrialist Vithalrao Vikhe Patil. Maharashtra took to sugarcane farming only in the 1930s where Bihar and Uttar Pradesh used to dominate. The initial set of sugar factories were all patronized by the British, and the cane farmers as well as factory workers felt excluded in the crony industrial set up.

Gadgil and Vikhe Patil worked towards getting farmers together and form cooperatives which would operate the sugar mills with guaranteed sourcing quantities and price. The specific structures evolved over time, but the premise was largely the same – assured returns on the crop, and plough back of profits from selling end products like sugar, jaggery, khandsari, and ethanol blends into the cooperative. The original idea of the cooperatives was to empower small farmers.

In the 60s and 70s, these cooperatives focused on enhancing the social status of the farming community. The operations were small but well managed. In mid 70s, the balance of power tilted from the private factories to the cooperative ones and for the first time, Maharashtra contributed more than a third of India’s sugar. This was the time when the owners of private mills sought to take control of the cooperatives, shifting focus on creating wide farming networks and developing administrative capacities.

Vasant Dada Patil, the first modern Maratha strongman of politics rose to the post of Chief Minister in 1977. During his first 18 months rein, the state government saw an opportunity in scaling the small cooperatives. As the average member size of cooperatives grew, setting up new factories became easier – a small equity stake for the farmers with debt leverage. With the cooperative banks mushrooming in Maharashtra, owned mostly by politicians directly or via front companies, the funding came easily. The state government started supporting setting up of new factories through grants, which were recovered via a purchase tax on factories purchasing sugarcane from farmers. The payoff period for the state government was just three years for a typical grant, and the easy money fueled the boom.

In an article in India Today published in the late 70s, chairman of one of the sugar factories explained the extent of political influence:

“Half the ministers in the Maharashtra cabinet are connected with sugar factories.” He adds, smiling broadly: “Ten factories are held by the Janata, 15 by Pawar’s group, five by the Indira Congress faction, one by the Peasants’ and Workers’ Party (PWP) and the rest by Vasantdada.”

These remarks were made in the context of then Chief Minister Sharad Pawar lamenting how the sugar lobby was destabilizing his government – he had taken over from Vasant Dada Patil as the CM in a political coup of sorts. Clearly he learnt his lessons from the politics of that era, and over time, his National Congress Party (NCP) became a political force to reckon with in the sugar belt. By 2005, the NCP had made deep inroads in the industry.

In an article published in Frontline in 2005, a sugar industry official was quoted on the political links:

“There is not a single cooperative that is not under political control. While 5 per cent of the sugar factories are controlled by Bharatiya Janata Party-affiliated unions, 95 per cent are under Congress control. Of the latter, 60 per cent are under the control of the Nationalist Congress Party (NCP),”

The original cooperatives required only 11 farmers to come together to form a vertically integrated business. Over time, the cooperatives boomed and at the peak, Maharashtra had more than 210 sugar factories, including private ones. The large cooperatives ended up with more than 25,000 members each. In the 70s and 80s, while 90% of all member farmers usually had small holdings in 70s and 80s – typically fewer than 2 acres – the small fraction of large farmers and industrialists owning hundreds of acres started dominating the cooperatives and became their managing directors. By early 90s, the elections to these sugar cooperatives had become as costly as the elections to a Parliament seat!

As the scale of operations grew and a handful of strong sugar barons emerged in the 80s and the 90s, the political linkages started to play out. The state government became an active player in the industry. A Sugar Factories Order was passed in the 80s, linking factories tightly with the sourcing area for the sugarcane crop. Exceptions could be made via assessing officers, opening the doors for active state intervention and consequent corruption.

The previous Shiv Sena – BJP government liberalized the zoning laws, but by this time, either most sugar barons were already established politicians or most established politicians had ventured into the sugar industry. The state also created laws around statutory minimum prices for sugarcane sourcing, but created provisions for payments in installments. These minimum prices were delinked from national and global sugar and derivative commodities prices, and the installment system started leaving the small farmers in lurch.

This shifted the attention to managing the demand side of the market. The growing stature of state level sugar barons enabled them to lobby in Delhi. The Union government operates an Essential Commodities Act and decides on the export timing, quotas, and pricing as well as the import tariffs. As the game shifted to Delhi, the active export and import management became routine to keep the sugarcane growing attractive for small farmers in Maharashtra (and Uttar Pradesh).

The first large scale trouble in the industry came about in 2000s when the global sugar prices were fluctuating. The Union government provided financial restructuring packages to Maharashtra sugar mills, which were struggling to pay their arrears. Between 2005 and 2013, several interest subvention programs were run and restructuring deals conducted to stabilize the industry. The state government raised money on its books in 2003 and provided easy loans to the factories with moratorium on principal payments and deferred interest payments. The sugarcane purchase tax was suspended between 2002 and 2007. The state government also continued to provide direct fiscal incentives to farmers too.

As the industry floundered, the small farmers had to be kept interested in growing the crop. The farmers had to be incentivized to grow even more sugarcane to enable the factories to come out of loss and repay arrears. To manage the ecosystem, easy water was made available to the sugarcane farmers with diversions from cities especially Pune. This became a norm after 2010 and water became a tool to run the sugar ecosystem, which by now was the route to political clout in Marathwada and Western Maharashtra.

The recognition of this water scarcity problem as a public choice issue rather than an agricultural one is critical. Maya Lalwani of the University of Mumbai had described this nexus in her 2005 research paper (PDF link here) as the Capture Theory of Regulation:

“… economic regulation serves the private interests of politically effective groups. Economic regulation is thus viewed as product whose allocation is governed by the laws of supply and demand. Stigler (1971) identifies four main policies which an industry may seek (a) Cash subsidy (b) Control over entry by new rivals (c) Control on substitutes and complements and (d) Price-fixing.”

It is this regulatory capture that needs to be undone by CM Devendra Fadnavis to solve the water woes. Maharashtra has faced two successive droughts in 2014 and 2015, with 40% below normal monsoon. In this context, his job is extremely challenging. He can take solace from the fact that BJP did not win as handsomely in Marathwada in the October 2014 assembly election and this lack of local power can come handy in a strange way. The CM will have to initiate a series of short and long term initiatives to make a lasting impact.

Jalyukt Shivar Abhiyan: The CM launched a farm level water management program called Jalyukt Shivar Abhiyan in December 2014. The program can form the backbone for a long term water management solution, but the works constructed and rejuvenated under the program will help only after it rains. The investments announced for the program in the 2016-17 Budget should continue with active corporate and societal participation.

‘Beyond Sugarcane’: In 2015, the state government launched this program in Osmanabad to reduce the area under sugarcane cultivation. Last year, Osmanabad district saw halving in the area under sugarcane, with the government promoting horticulture and providing cropping and selling assistance. This program needs to percolate to other districts on a war footing for 2016 to promote short cycle, good margin crops, so that the farmers see them as credible alternatives.

Empowering Local Administration: Recently, the South Asia Network on Dams, Rivers and People (SANDRP) wrote about how Solapur has managed the water scarcity in 2016 effectively by managing local stakeholder expectations and balancing short and long term water requirements. The learning from the Solapur should be applied to all drought hit areas immediately.

Controlling operations of sugar factories: The state should manage the water use by sugar factories closely, demanding full declaration of requirements and actual use. Limiting crushing licenses every year in future may be critical, enabling consolidation of factories generating economies of scale over time. This will lead to temporary employment loss, which the state has to actively manage. Ultimately, an orderly unwinding of some of the cooperatives and a blanket ban on establishing new ones for the next few years may be required.

In his 2012 article, veteran journalist and author Shankkar Aiyar writes:

“An accident, normally, is an event that has unfortunate consequences. In this political economy, though, an accident can also be fortuitous. India’s ascent has been fuelled by serendipity; change has come about as a consequence of circumstance and crisis, and has always been a result of an exogenous force. Most often, that force has been a crisis.”

The drought provides a great opportunity to Fadnavis to dismantle the machinery behind sugar politics in Maharashtra. Better water management will be only one of the positive outcomes if he succeeds.