UP 2022: Closer Look At ABP-Cvoter Survey Reveals That NDA May Get Even More Than The 263 Seats Projected 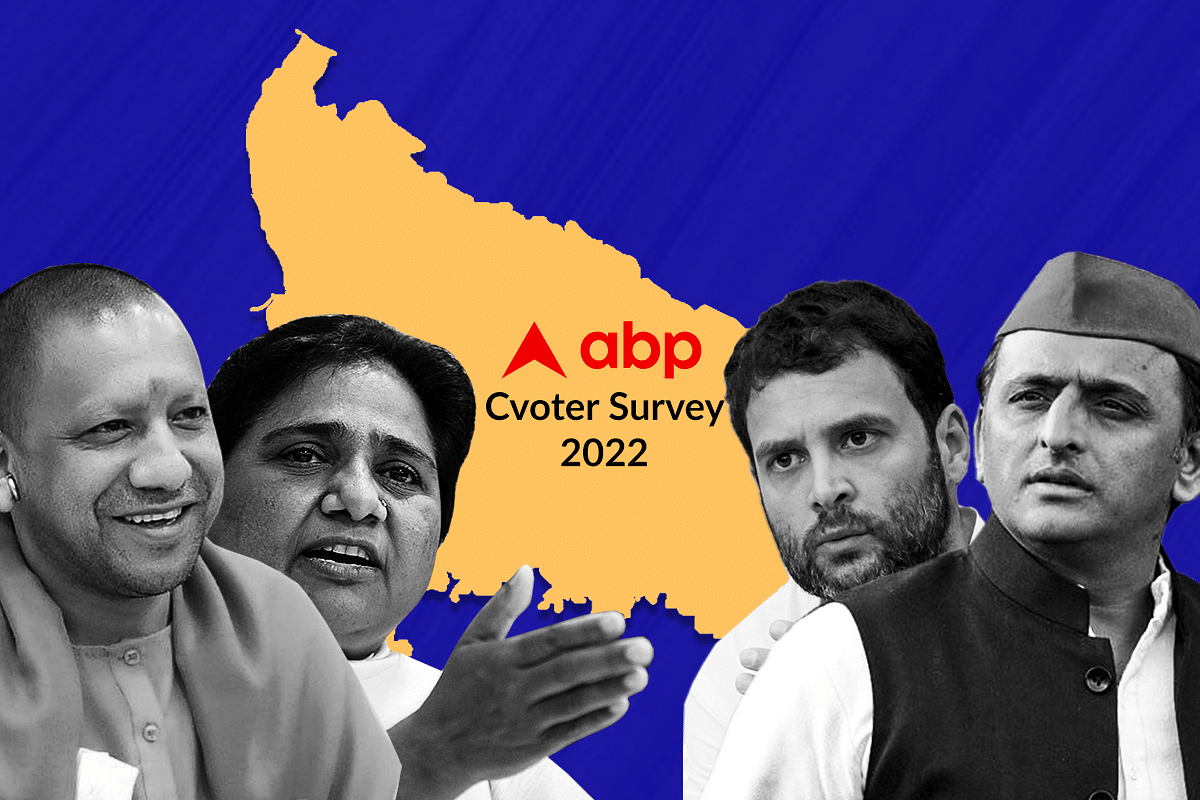 The forthcoming assembly elections in Uttar Pradesh were finally quantified for the first time this election season, when ABP News broadcast the results of a Cvoter pre-poll survey on 3 September.

ABP’s prediction is that Chief Minister Yogi Adityanath and his Bharatiya Janata Party (BJP), along with the National Democratic Alliance’s (NDA) partner, the Apna Dal (AD) of Anupriya Patel, would return for a second term with a comfortable majority.

The survey assumes that Akhilesh Yadav’s Samajwadi Party (SP) would ally with the Rashtriya Lok Dal (RLD), while the Congress (INC) and Mayawati’s Bahujan Samaj Party (BSP) would contest alone. These are the opinion poll findings:

Is this survey valid, and if yes, then to what extent?

An apples-to-apples comparison is not possible here, since the electoral alignments between various parties have changed significantly from election to election. The possibility of the BSP tying up with the SP, as it did in the 2019 general elections, or of the Congress going with the SP, like in 2017, or of all three coming together, cannot be ruled out at present. Any one of these combinations would shift the seat tally sizably.

For background, here are the coalitions of the past two elections:

In the 2017 assembly elections, the RLD and the BSP went it alone. Both were badly yorked by a Modi wave. The RLD won only one seat of the 277 it contested in; that is a success rate of just 0.4 per cent. The BSP fared only slightly better, winning 19, or 4.7 per cent, of the 403 candidates they gave tickets to.

The Congress and the SP fought on a joint platform of ‘Do Ladke’, or ‘Two Lads’ – a cheery reference to Rahul Gandhi and Akhilesh Yadav, the two young men in charge of their respective parties. Their expectation was that a grand coming together of every last Muslim vote under the SP’s OBC Yadav umbrella would propel them to a majority. However, the SP won only 47 seats, and the Congress, a paltry 7.

The BJP continued with the legacy of the late Kalyan Singh, by further consolidating the non-Yadav OBC votes through a coalition with two small parties – the Apna Dal and a Rajbhar community outfit called the SBSP. The formula worked. The BJP registered its highest vote share, 39.7 per cent, and won 312 seats; the NDA total was 325.

In the 2019 general elections, the alignments shifted. This time, the SP went with the RLD and the BSP (an unthinkable political coming together, considering what Mulayam Singh Yadav put Mayawati through in the 1990s). The formula flopped in the face of a monstrous Modi wave, and won them only 109 assembly segments with 39 per cent of the vote share.

That left the Congress out in the cold, alone with its hubris, and reduced to picking up scraps. Their vote share stayed at 6 per cent, and they led in only eight segments; the bulk of those was in the only Lok Sabha constituency they won – Sonia Gandhi’s Rae Bareilly.

The BJP was dented by the SP-BSP tie-up, and the SBSP had left the NDA, but it was still enough for them to attract 51 per cent of the vote share and lead in 284 segments. That’s how dramatically voting patterns had changed in Uttar Pradesh.

What alliances might emerge in 2021 is anyone’s guess. If the Shiv Sena could align with the Congress in Maharashtra, then anything is possible, and nothing can be ruled out. In that light, the vote shares surveyed by ABP-Cvoter offer us an opportunity to do some election math of our own.

Here are the party-wise outcomes and swings in Uttar Pradesh:

This is where the survey’s constraints surface.

We can understand 1.2 per cent of the Congress vote shifting to the BJP, since the Congress vote base has been shrinking steadily for the past few decades; the party is in terminal decline (see here, for a historical assessment of how the Congress crumbled during the late 1980s and early 1990s in UP).

We can also understand the shift of 6.6 per cent votes from the BSP to the SP. This is the Muslim vote, mulishly driven by an alarmist Ashrafi fiction of minority victimhood and once again seeking strength in Yadav numbers.

So, if those dynamics haven’t been captured by this survey, then the conclusion is that it has underestimated the BJP’s actual vote share; meaning, that it would be more than the 41.8 per cent presently allocated by the survey. The implications of that are fairly momentous: the BJP (and the NDA) would get more seats than the 263 forecast by the survey, and the vote margin between the BJP and the SP would increase.

Now, we can’t gauge what the actual figure might be, until a few more surveys are conducted. Nonetheless, as on date, as per this writer, the NDA’s base vote share in UP should be in the 43-45 per cent band. Also, new political alliances would send current calculations into the bin; for instance, if the Congress, the BSP and the SP got together, voting patterns and outcomes would change by a fair bit.

However, this much is clear in closing:

One, the longer the Congress and the BSP stay on their own, the more they will shrink. Both will lose their non-Muslim bases preferentially to the BJP than to the SP.

Two, the Muslim vote is moving towards the SP, making it the primary opposition party. That leaves Congress and BSP with an existential dilemma: align and lose one’s identity, or go it alone and lose the election.

Four, if the index of opposition unity is even slightly less than 100 per cent, the highest probability is that the BJP would sweep Uttar Pradesh again.