'Vaccine Rajneeti' By Irresponsible Politicians Could Prove Costly For India 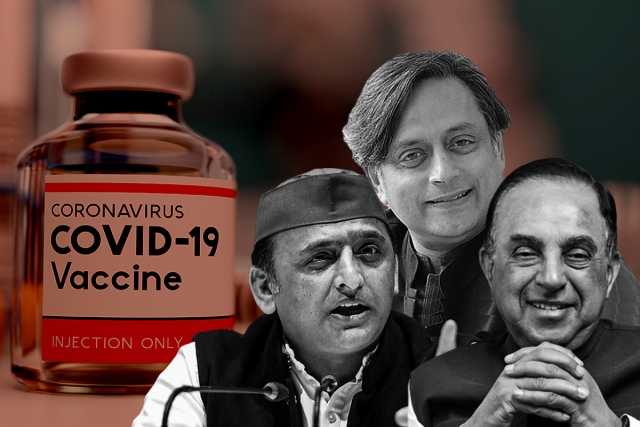 Politics over vaccine can cost this country

A decade ago, the general complaint by politically active folks against Indian society was that it doesn’t take much interest in ‘raajneeti’.

Fast forward to now, when everything under the sun in politicised, there is nostalgia about the good old days.

The latest victim of ‘too much politicisation‘ is vaccine development in the country.

On 3 January, the Drug Controller General of India (DCGI) approved the Subject Expert Committee’s recommendation for emergency use of Covishield, a vaccine candidate developed by AstraZeneca-Oxford and Covaxin, developed jointly by Bharat Biotech, Indian Council of Medical Research and National Institute Of Virology, Pune.

Even before the official announcement of the approval of the two vaccines came, Rajya Sabha MP Dr Subramanian Swamy castigated the government for only approving the foreign vaccine Covishield while withholding the nod for the swadeshi Covaxin.

Of course, as DCGI announced officially the next day that both vaccines have been approved for emergency use, Swamy was proved to have jumped the gun too soon.

It is also another matter that both vaccines are being manufactured indigenously. The so-called foreign vaccine, Covishield, is being produced in Pune by Adar Poonawala’s Serum Institute of India (SII).

Giving approval to Covaxin created its own controversy as Opposition leaders decided to indulge in scaremongering rather than celebrating the success of Indian scientists.

Akhilesh Yadav, pandering to his mullah constituency which has been fanning fears against anti-Covid-19 vaccines, termed it as ‘the BJP’s vaccine’.

Another leader from Yadav’s party, Ashutosh Sinha, gave his 'expert opinion' claiming that the vaccine might cause impotency.

If Akhilesh left any doubt about the dogwhistle, Sinha cleared it.

Then came the Congress party. How could it not grab any opportunity to muddy the waters, create confusion and spread misinformation when it comes to any policy of the Modi government?

Its leader, Rashid Alvi, justified Akhilesh Yadav’s fear-mongering, saying that the BJP government cannot be trusted as if the vaccine was developed by the Modi-Shah duo overnight at 7 Lok Kalyan Marg, rather than by scientists in labs over the last nine months.

Shashi Tharoor, whose proficiency in the English language is often mistaken as a sign of intellect, then raised questions over the approval of Covaxin when third-stage trials were still ongoing.

On the surface, his concern might appear genuine in the absence of efficacy data generated during Phase 3 of the human clinical trials.

After all, we only know for certain about Covaxin’s ability to trigger an immune response and its safety from the data generated in Phase 1 and 2 clinical trials.

But he, knowingly or unknowingly, conveniently forgot to mention that approvals to Covishield and Covaxin are qualitatively different, as pointed out by AIIMS Director Dr Randeep Guleria and ICMR Director General Dr Balram Bhargava.

“This is like a back-up. If we find that cases don’t rise, then we stick to the SII, till the Bharat Biotech data comes early next month. And if that data is found to be good enough, then they will get the same approval as the SII. Indirectly, looking at the safety profile, that (Covaxin) is a safe vaccine, although we don’t know how efficacious it is. They (the regulators) have given, I would say, a green signal to start stockpiling in case we need it,” Dr Guleria explained.

“Only in such circumstances — when there is a need to vaccinate a large number of people, that cannot be done using only the SII’s vaccine — Bharat Biotech would be allowed to give the vaccine,” he added citing the cases of UK and USA which are setting a new record of daily Covid-19 cases even now.

Given that India’s case load is continuously declining over the past few weeks, there won’t be any need to deploy Covaxin.

Even if the cases rise fast in the next one month, the SII vaccine should suffice.

And if the situation worsens to an extent where Covaxin needs to be used, it will be in a manner similar to the clinical trial mode ‘so that there is very close monitoring from the point of view of safety and side-effects.’

“It will not be like the usual marketing of a vaccine (for commercial use). It will be like a trial, where they will be called up frequently about the side-effects, and a database will be maintained,” Dr Guleria says.

So, the whole controversy over approval to Covaxin is unwarranted.

Of course, this raises an obvious question: if we aren’t going to use Covaxin right away, why give it an approval?

This could’ve been given later, if and when the need really arose. There was no need to hurry, given that Covaxin would’ve been done with its whole process in a couple of months anyway.

By prematurely approving it (which will not be used in immediate future), the government has courted needless controversy.

Additionally, it puts India in the same bracket as countries like Russia and China, which are the only ones to have approved vaccine candidates prematurely.

In neither of these countries, vaccination of a large share of population has happened, despite vaccines available for some months probably due to concerns related to quick approvals.

However, one consideration that worked in favour of Covaxin is its potential in mounting a resistance against the new mutant strain spreading fast in the UK, as Dr Guleria said.

This was ‘a key factor in granting the emergency approval’ to Covaxin, according to him.

Be that as it may, the politicisation of the vaccine approval could have serious repercussions for the country, as irresponsible statements by politicians will sow enough doubts in the minds of the people who may then shy away from getting a jab.

The Modi government, which is currently struggling to resolve the concerns of farmers camped on the borders of New Delhi, should know too well the costs of misinformation and propaganda.

It, now, has its task cut out for itself.