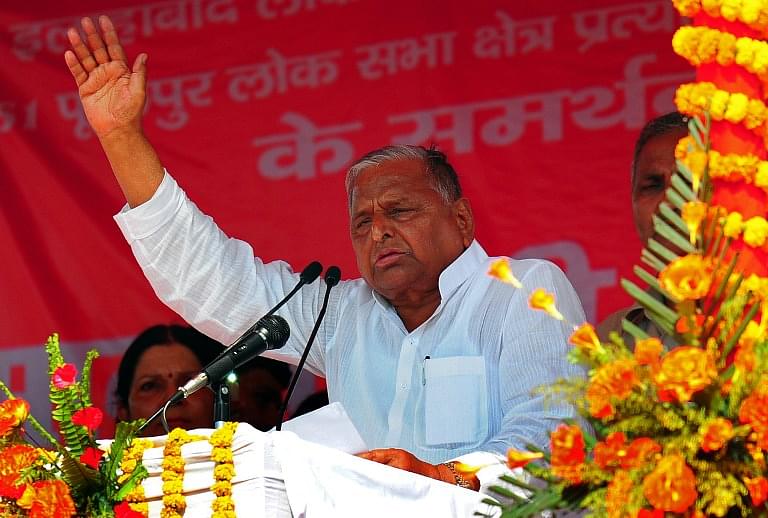 The 2017 Assembly elections in Uttar Pradesh may be around 20 months away. But, strategies are being made and knives sharpened, so to speak, with each passing day.  What lies in store for the contesting parties?

The next Assembly elections in Uttar Pradesh (UP) in 2017 are about 20 months away, but the electoral battle lines are being drawn.

People are becoming increasingly analytical about the possible outcome of the election.

Questions are being asked.

Will the Samajwadi Party (SP) regain power, or will it be thrown out of office? Will the Bharatiya Janata Party (BJP) replicate its 2014 Lok Sabha (LS) performance in UP? What about the Bahujan Samaj Party (BSP)? Is Mayawati still relevant in UP and a serious bidder for power? Will the Congress manage to regain its previous low or will it slip further? Or, does the party have any chance of revival at all? How about the Aam Aadmi Party (AAP) and the All India Majlis-e-Ittehadul Muslimeen (MIM), which might give sleepless nights to some self-proclaimed secular parties in UP?

The electoral politics in UP is complex because of multi-corner contests and the role of the caste factor. However, some parties have made new moves by attempting social engineering, shifting the public discourse from caste to class, or running electoral campaign primarily on development.

The Samajwadi Party won 224 seats and 29.1% votes in the 2012 Assembly elections. That was the lowest vote share with which any government had been elected in the UP since the independence. Earlier, the Mayawati government in 2007 had been elected with 30% votes.

But, the Akhilesh Yadav-led government earned a bad reputation soon. Yadav’s initial years were touted as the government of many chief ministers (Akhilesh Yadav, Mulayam Singh Yadav, Ram Gopal Yadav, Shivpal Yadav and Azam Khan). There was constant focus on his inability to provide leadership to government and bureaucracy.

His government also earned a bad name for Muslim appeasement, promoting Yadavs in jobs and plum postings, and, failing on the law and order front. That resulted in the Samajwadi Party’s humiliating defeat in LS elections 2014.

The Akhilesh government has done a few things on the development front, most importantly on Lucknow metro, express-highway, energy sector, etc. But, all the credit for development comes to nothing if the citizens feel unsafe.

The present SP government is facing exactly this situation. The people see law and order during Mayawati regime as the golden era. That’s the reason the SP supremo Mulayam Singh Yadav publicly reprimanded Akhilesh and his ministers to mend their ways or face the wrath of the public in the next elections.

Why does Mulayam criticise Akhilesh and his government in public so often? One argument is that, sensing the impending defeat of the SP in 2017, he wants to dissociate himself from the failure. In other words, he wants to create an escape route for himself by referring to his previous warnings.

The second thesis is that, by rebuking Akhilesh, the head of the government, he is, by proxy, also rebuking all Ministers, thus saving Akhilesh from the unpleasant task.

The Akhilesh government needs to worry that SP’s support base in UP was seriously eroded in the 2014 LS elections. It lost votes across all the sections of the society except the Muslims.

The chances are that, because of the emergence of Owaisi’s party MIM, SP may lose some votes from among the Muslims. That has forced staunch communal elements in the SP as Azam Khan to change the tone, tenor and substance of their speeches to find ways to get Hindu votes.

Many feel that Mayawati cannot be written off in UP politics since she has a substantial Dalit base. However, having a support base is one thing and, converting those numbers into votes, something else altogether.

Will the Dalits vote for Mayawati in the next Assembly elections? After all, she used to be a symbol of the Dalit identity, which had always strengthened her claim over the Dalit voters. But, how long can her image of an icon influence voters in the absence of qualitative improvement in their day-to-day lives?

It is possible that the Dalits believe that they want to back a party that may give them better returns, better life. Indeed, in the 2014 LS elections, a substantial chunk of Dalit voters moved away from the BSP to the BJP.

Eighteen percent of Jatavs (hardcore BSP voters) and 45% non-Jatav Dalit voters voted for the BJP, although 68% Jatavs and 29% non-Jatavs still voted for Mayawati. But, finally, the myth of Dalit voters being captive to Mayawati dissolved. They were prepared to vote for another promising leader. That is the risk for Mayawati.

Additionally, BJP is not leaving any stone unturned to win the support of the Dalits. Through the help of RSS, it is accommodating them in organisational structure and leadership positions. Also, the BJP government at the Centre is trying to improve their economic lot by bringing in schemes of financial inclusion (Pradhan Mantri Jan-Dhan Yojana) and social security (Pradhan Mantri Suraksha Bima Yojana), which will benefit Dalits, who are also at the lowest rung of social and economic hierarchy.

The latest in the series is the creation of over one lakh SC/ST start-ups through public sector banks with each branch patronising at least one SC/ST start-up. These may facilitate a Dalit shift from identity politics to development politics. And, there, Mayawati stands to lose.

The BJP lost power in UP in 2002 with Rajnath Singh as the Chief Minister. For the last 13 years, the party had been in a complete disarray in the state. It was powerless, leaderless, and virtually voter-less.

In the previous assembly elections (2012), the BJP was reduced to just 47 seats and 15% votes. Viewed in that backdrop, the party’s performance in the 2014 LS elections looked very puzzling. Political pundits searched for answers and came up with many as well.

Will the BJP replicate its LS performance in the assembly elections in 2017? In 2014, BJP’s LS show was mainly credited to Modi. He was able to convince the voters about his twin agenda of inclusion and development. His impact was proved when the party received votes from all the sections of the society, including Muslims.  A Centre for Study of Developing Societies (CSDS) post-poll survey shows that about 10% Muslims in UP voted BJP.

So, should the BJP feel confident about its victory in the 2017 assembly elections? UP politics is complex; one needs a good grasp of electoral arithmetic and political chemistry to comprehend electoral dynamics.

Modi’s development agenda was the focal point that brought the voters together in 2014. But, there are serious doubts on whether BJP will develop a similar focal point for assembly elections.

It is possible that people won’t view Modi with the sort of reverence that they did during the national elections. The BJP boasts of being a cadre-based party, but it has not been able to project state level leaders.

In the previous election, the party had to import Uma Bharati from MP, leading to a big fiasco. Who else, then? That is the dilemma. If the BJP has no face to project in the UP, more prominent leaders – that is, Akhilesh and Mayawati – may emerge as the frontrunners.

Who can BJP introduce as its political face in UP? A beginning was made when Smriti Irani contested in Amethi against Rahul Gandhi. Perhaps, the idea was not only to take Rahul head-on and give Smriti wider publicity but also to explore whether she would click with voters of UP. Smriti provided a stiff challenge by polling three lakh plus votes.

Given the facts that the young leader scripted the few first lines of her story of rise with debut in UP and now has the experience of an important ministerial portfolio at the Centre, she can possibly become a formidable candidate for the top leadership position in UP. At present, no one seems even close to her in that race. Besides, she can take on Mayawati and Akhilesh, who definitely cannot match her oratory skills.

If she is projected as a potential chief ministerial candidate, the BJP can hope to make it to the finishing line with a clear victory in the state.

What is Congress Doing?

The Congress lost power in UP on 5 December 1989 to Mulayam Singh Yadav, then in Janata Dal. Since then, it has suffered regular setbacks before hitting the rock bottom in the 2014 LS elections in which it could win only two seats.

The party is not ready to believe that it can be run without Nehru-Gandhi dynasty, and hence, without Sonia, who has been the President for 17 long years. It is not ready to democratise its party apparatus and reward grassroots workers, discourage sycophantic culture and promote dedicated workers. How, then, will it revive?

As Sonia Gandhi is desperate to elevate Rahul to the top, chances of democratisation of Congress have become very slim. Steadily, all the other influential leaders in the party both at the state and national level have been marginalised.

Can a party steered by feudal principles dream of winning in a democracy?

Unless the Congress is prepared to change itself, chances are that the people of UP will continue to reject the Congress.

The Aam Aadmi Party (AAP) and MIM of Owaisi may play the spoilsport in the next elections. While AAP has suffered due to party factionalism and leadership war between Arvind Kejriwal and Yogendra Yadav and Prashant Bhushan, Owaisi has created panic for self-styled secular parties, especially SP.

The SP got 39% Muslim votes in UP in 2012, while Owaisi’s MIM, an alternative and autonomous political platform, may make inroads among the Muslims. That means danger for the SP.

Until the 2017 assembly elections take place, the battle lines will continue to become clearer by the day. That will make for an interesting watch.