Dragon Breathing Down India’s ‘Chicken’s Neck’: Why This Chinese Project In North Bangladesh Is A Grave Security Threat 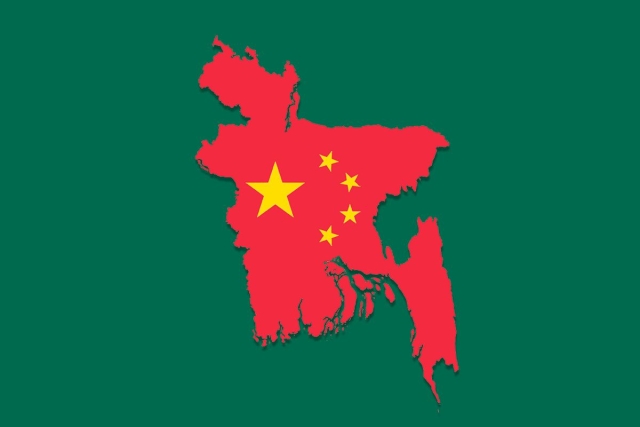 Chinese flag and map of Bangladesh.

After having tried, and failed, to choke the strategic but vulnerable ‘chicken’s neck’ (also known as the Siliguri Corridor) from the north through Bhutan, China appears to be trying to do the same from the south through Bangladesh.

The 73-day standoff between Indian and Chinese forces at Doklam (near the trijunction of India, Bhutan and Chinese-occupied Tibet) in 2017 resulted due to Chinese attempts to occupy the strategic Doklam plateau in Bhutan.

Had the Chinese succeeded, they would have gained immense strategic advantage from Doklam over the ‘chicken’s neck’ which is barely 50 kilometers away.

The Chinese would then have been able to choke the vulnerable corridor that connects Northeast India with the rest of the country.

After being forced to retreat from Doklam and stomach the ignominy of its plans being thwarted, Beijing has been brainstorming to gain alternative access to the corridor.

And it has now succeeded under the garb of financing the $983 million ‘Teesta River Comprehensive Management and Restoration Project’ in Northern Bangladesh.

The mega project involves dredging the Teesta river (which originates in Sikkim and flows through North Bengal into Bangladesh) to increase its depth, building embankments to restrict the width of the river to one kilometer and reclaiming land from its floodplains.

The Chinese have drawn up elaborate plans to build townships, industrial parks, economic zones, roads and other facilities on the land reclaimed from the Teesta.

The Teesta, after entering Bangladesh, flows almost parallel to the Indo-Bangla border and, as such, all these facilities will be within a distance of 10 kilometers to 30 kilometers from the international border.

As with similar loans that China extends to other countries, the nearly one billion dollar loan to Bangladesh will stipulate that contracts for executing the massive works be given exclusively to Chinese companies.

Chinese companies will also build factories, including a large solar power plant, and a satellite city to complement Rangpur (the headquarters of the eponymous administrative division of Bangladesh) that will be just 40-odd kilometers away from the Indo-Bangla border.

At least some of the townships that Beijing plans to build near the factories it will set up on the northern banks of the Teesta will be exclusively Chinese facilities inhabited, maintained and protected by the Chinese.

China has built similar townships in many other countries, and all these townships, like the Shwe Kokko township in Myanmar (read this), are ‘no-go’ zones for even locals.

These townships are often security posts with sophisticated surveillance equipment protected by well-armed Chinese soldiers in the garb of private security guards.

The townships, factories and other facilities that China is planning to build and run on the northern banks of the Teesta will double up as quasi-military posts and surveillance stations to keep watch on the Siliguri corridor.

The Siliguri corridor and adjoining areas house a number of Indian army and air force stations — the headquarters of the Indian Army’s 33 Corps at Sukhna near Siliguri and the various formations under it all over North Bengal, as well as IAF bases at Bagdogra and Hasimara.

The IAF base at Hasimara will house the second squadron of Rafale fighters while the one at Bagdogra has interceptors and a helicopter squadron.

There are many other military facilities in the plains and hills of North Bengal adjoining Bangladesh.

Experts say that the proposed measures to ‘tame’ the Teesta are faulty and will prove to be counterproductive.

As such, the economic viability of the entire project is highly doubtful.

But, as instances from around the world have shown, that is exactly what China wants: to fund unviable projects at extortionist rates of interest and then take over all the land and facilities on long-term lease once the ‘beneficiary’ country is unable to repay the loans.

Case in point: the Hambantota port in Sri Lanka that Colombo was forced to lease out to China.

The facilities like townships, factories, river ports and other facilities that China is planning to build in Rangpur division will most likely become white elephants for Bangladesh and, like Colombo, Dhaka may well be forced to hand them over on long-term lease to China once it is unable to repay the Chinese loans.

Once that happens, these facilities will turn into Chinese quasi-military stations from where China can mount surveillance on Indian military facilities in North Bengal.

And in the event of hostilities, an attack can be mounted by China from the north (Chinese-occupied Tibet) of the corridor while closely monitoring Indian activities from the south (Bangladesh) of the corridor.

Military experts say that such an attack can sever the fragile link between Northeast India and the rest of the country.

The Chinese can, and are most likely to, mount surveillance on Indian military facilities and troop deployments and movements in North Bengal even while constructing the facilities in Bangladesh.

That’s because all Chinese companies have close links with the Chinese military and the PLA often has strong stakes in these companies.

It may be pertinent to mention here that Bangladesh has sought financing from the Asian Development Bank (ADB) and the Japan International Cooperation Agency (JICA) a few years ago for the Teesta project.

But both these agencies declined because they could see little financial viability.

China’s intention in financing this project that the ADB and JICA assessed to be unviable cannot be altruistic.

China has a dishonourable track record of financing unavailable projects — or ‘predatory financing’, as it is called — in other countries and then (forcibly) taking them over on lease.

These projects and the land they are on become Chinese posts that Beijing utilises for strategic purposes.

Beijing plans to do the same with the Teesta project.