Why A Hung Assembly May Be Advantage BJP In Karnataka 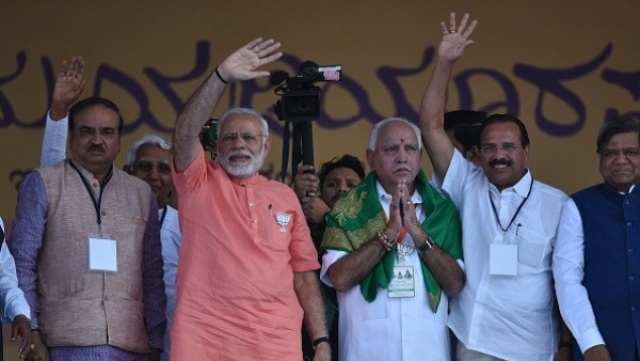 Two recent opinion polls, one by India Today-Karvy and other by Times Now-VMR, have predicted a hung assembly in Karnataka. They predict Janata Dal (Secular) will play the role of kingmaker. Both surveys are identical in terms of seat and vote shares, however they display regional variations. Seats projected by these polls are similar to the tally of 2013 if Bharatiya Janata Party (BJP) had contested as a unified force with Yeddyurappa and Reddy brothers in the party.

Why Opinion Polls May Go Wrong

It’s too early, still 2.5 weeks left for polling day. 42 per cent of voters in 2008 elections decided whom to vote for only on the voting day or two to three days earlier as per CSDS survey. Even in 2008, polls predicted a hung assembly, but BJP won. Early opinion polls tend to over-estimate the ruling party, like in Uttar Pradesh and Gujarat. ABP survey one month before polls predicted 117 seats for BJP in Gujarat. It got 99. Most surveys one month before elections in Uttar Pradesh predicted a hung assembly, we know what happened. There is no palpable wave on the ground. Many people have not yet decided whom they will support. Candidates of parties for some seats are still being announced.

In the history of Karnataka polls, public have given a hung verdict only twice, once in 1983 and another time in 2004. According to political analyst Dr Sandeep Shastri, in 1983, the state was transiting from a one party domination to a competitive party politics. In 1983 the Congress was defeated, but the people were not sure if the then Janata Party was the competitor. By 1985, it was clear and the Janata Party got the majority. Between 1983 and 2004, the competition was mainly between Janata Party / Janata Dal / Janata Dal (Secular) and Congress. In 2004, the two-party competition system changed and BJP came into the picture. The year 2004 saw the BJP emerging as the single largest party. It was in competition with the Congress and the Janata Dal (S).

Dr Shastri opines that since this year no political transition is taking place, there will not be a hung assembly. I would concur, the probability of a severely hung assembly is low in my opinion. Everybody knows that JDS is strong only in Old Mysore (it won 60 per cent of its seats in 2013 from here) and will be number three. Main contest is between Congress and BJP. JDS can play a role only in case of a hung assembly. If BJP or Congress manage to win on their own like in 2008 and 2013, constituencies of people who elect JDS MLAs are likely to suffer.

While it is true that people are increasingly giving clear mandates, post 2014 Lok Sabha elections, Jammu and Kashmir, Goa, Manipur and Meghalaya have thrown up hung assemblies with no clear winner. Impossible is possible in politics.

A Hung Assembly Is Bad News For Congress

A hung assembly is bad news for Congress as its seats are likely to be lower than being projected as elections draw near and more opinion polls emerge.The better the JDS does the poorer Congress will do. In 2013 elections, JDS won 40 seats, on 30 such seats Congress and Independents finished runner up. JDS was runner up in 50 seats, in 36 of such seats Congress and Independents emerged victorious.

In case of hung assembly, JDS would assume the role of kingmaker. Seven MLAs of JDS were poached by Congress just before elections and there is growing animosity between the two parties. JDS is vulnerable and may split. Deve Gowda faction may back Congress while Kumaraswamy faction may back BJP. Anti-BJP parties which are trying to forge a Third Front will pressurise Deve Gowda but does he have hold among the party and MLAs is the key question. The minorities and Dalits elected on JDS ticket will want to back Congress, the Vokkaligas BJP, as they consider Siddaramaiah as anti-community. More Vokkaligas and forward caste members are expected to win from JDS.

In my opinion, Siddaramaiah is likely to face the same fate as Akhilesh Yadav. A section of the media and the polls were projecting his victory. However, since there was no significant work done on the ground and there was high degree of anti-incumbency against sitting MLAs, he lost big time. A fear of a hung assembly and the resultant instability also pushed a section of voters of BSP towards BJP, resulting in an emphatic win. In Karnataka as well, urban voters may not be happy with the prospect of a hung assembly. Memories of 2004-2008 will haunt them, there were three chief ministers, one from each party during this period and the state witnessed heightened instability, horse trading and jod-tod.

I reiterate, the probability of a severely hung assembly is low in my opinion. The only reason it could happen is that people of the state want a regional party to have a share in the power pie. Either way it is advantage BJP in Karnataka as JDS is more likely to ally with the party. As a vote for JDS is primarily a vote against Congress. We have seen how BJP has managed to form government is all states which have given hung verdicts since 2014 because of its prompt decisiveness and increasing acceptability. A hung assembly is advantage BJP in Karnataka.