If The Congress Manifesto Does Seek To Repeal Sedition Law, It Would Be Bad Optics 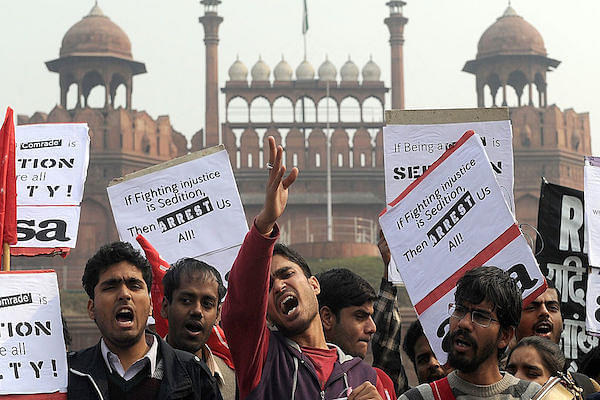 Back in December, I had written how in spite of wresting power back from the Bharatiya Janata Party (BJP) in three states, not all was well with the Indian National Congress’s prospects for 2019. The developments since then have only made the situation more challenging. While BJP, in a run-up to the elections, is picking up crucial allies in several key states, Congress is left out in cold out of a crucial alliance in Uttar Pradesh by Samajwadi Party, even as their own senior leaders are staying away from campaigning duties in Maharashtra.

These are managerial issues that require a good connect with the leadership at state level, and the feeling one gets is that Rahul Gandhi and his coterie are not in the listening mood just yet.

And still, I would contend that fixing these issues alone will do nothing to revive the party’s sinking fortunes until it gets its messaging on key cultural and social issues; the issue of nationalism and patriotism a key one among them, right. In this context, Tom Vadakkan mentioning party’s response to Pulwama as a key reason to quit on the same day the news of Congress manifesto promising to repeal the sedition law is, to say the least, horrible optics.

On issues of nationalism and patriotism, Congress continues to flirt with disaster; from seeking proofs of the Balakot air-strikes, to having its leader praise Pakistani Prime Minister and contrast him with the Indian Prime Minister. In a tweet, Rahul Gandhi even insinuated the Vajpayee government should have let the 190 Indian hostages die during the Kandahar crisis.

Even today, when China once again blocked the efforts to designate Jaish-e-Mohammed (JeM) leader Masood Azhar as terrorist, the tone of Rahul Gandhi and his spokespersons is one of gloating at Narendra Modi’s failure rather than anger at a foreign power shielding a terrorist. Even allowing for the possibility that a few valid criticisms of this government might have been dubbed unfairly as anti-national, there is no doubt, that in their effort to oppose Modi, Rahul Gandhi and his coterie have ended up thumbing their noses at the larger patriotic sentiment shared by over a billion Indians. With a possible promise to repeal the sedition law in these highly challenging and risky times, Congress’s policy has joined its messaging in drifting away from the ordinary Indian.

There should be no doubt in anyone’s mind that sedition law that we have is archaic in some places, while inadequate in most others. Predictably, it is also a huge pain-point for left leaning elites who look down upon the concept of nationhood itself, and think of sedition laws as an assault on personal liberties. Elites, due to the economic and social privileges, enjoy a degree of immunity from chaos of a society getting torn apart through a civil war like situation, while the poor suffer disproportionately. Indian elites also have a high degree of empathy deficit which results into them defending the right of a university educated goon to scream “Bharat Tere tukde honge” irrespective of what risks such incitement might create for the masses.

A political party, however, does not have the luxury of not addressing the anxiety that seditious behaviour creates in the minds of their voters. By promising to repeal the sedition law, the Congress party would make its allegiances clear, putting the entitled elites, over the masses. While the reasons to consider such a proposal can only be speculated upon, one can’t help but wonder if this does not reflect leadership’s alienation from the grassroots level.

Manifestos are supposed to promise the voters a fulfilment of aspirations. If the Congress brass thinks an ordinary Indian aspires to protect the right of a far left nutjob to demand separation of Kashmir from India, or defend a mass-murderer like Afzal Guru, then they are in for a rude shock. A more cynical explanation would be in their desperation to grab power and somehow stop the Modi juggernaut, Congress is throwing its door open to just about anyone who will align with them, separatists included.

The pragmatic side to it cannot be ignored either. We live in a hostile yet interconnected world where even the presidential elections of a country as powerful as the USA are not immune from foreign interference. Backed by multi-billion dollar cartels, today’s seditious behaviour affects areas as diverse and deep-rooted as education, policy, gender politics and elections themselves.

No government with a conscience can stand aside and watch powerful institutions and megalomaniacal billionaires using their vast wealth to tilt the balance away from its own citizenry. In today’s India, sedition is no longer a concern for people involved with the Kashmir issue alone. Seeking to abolish the only law which still offers some leverage to the government is akin to waving a white flag while putting blood in shark-infested waters.

But isn’t the law misused? Won’t it be a tool to stifle dissent in the hands of an authoritarian regime? Don’t people have a right to voice their opinion in a democracy?

To answer the last question first, the left has used this very freedom in democracies to promote a non-democratic, authoritarian way of governance across the world. For example, the left uses democracy in Jawaharlal Nehru University to demand that people who wish to establish a theocracy in Kashmir must be given a right to exercise their will. We must learn to differentiate between free speech and consequence of free speech. It is suicidal to defend the right to speech of someone who is advocating to take the same away from you.

There is also no denying that on the issue of misuse of law, the left runs with hare while hunting with hounds. The argument of misuse of law cuts zero ice with them when the law under question is domestic violence instead of sedition, in spite of the evidence of misuse of Section 498A, the domestic violence law, being far more overwhelming. Even the defence of free speech isn’t absolute, since most of the leftists favour censorship and heavy curbs on social media under the name of combating hate speech. The sleight of hand that the left elites employ while protecting sedition law is make it appear as a victimless crime. It is not. If breaking the nation in parts is the primary goal of seditious behaviour, then every time they have succeeded millions have died, left homeless, raped and lynched.

From direct action day in 1946 to the KP exodus, our own twentieth century history is full of examples of masses suffering due to government unwillingness or inability to stop seditious, anti-national elements. An argument defending the right of a separatist to shout tukde tukde is the beginning of a horror story that in the past has ended with Kashmiri women getting raped and sawn in two while alive. A political party ignoring the risks to the masses in order to virtue signal to their inner circle of champagne elites, is a party that doesn’t deserve to be in power even for one day.