Why #MadhyaPradesh2018 Is Actually Six Regional Elections In One 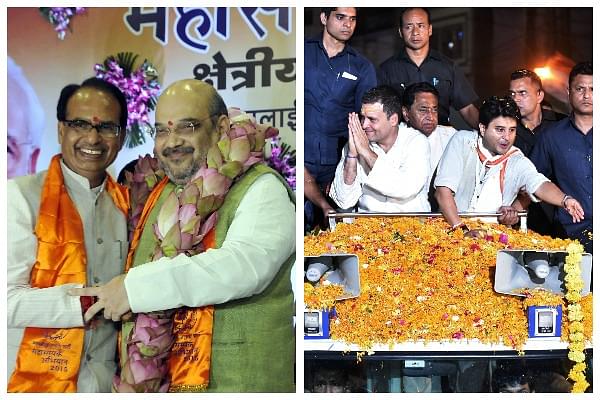 Madhya Pradesh is a state that the Bharatiya Janata Party (BJP) has been winning for the past three elections. However, within the state, different regions have been voting in a different fashion. This large state in central India is divided into 6 regions namely Vindhya, Gwalior-Chambal, Malwa, Madhya Bharat, Mahakoshal and Bundelkhand. Malwa is the largest region with 65 assembly constituencies while Vindhya and Mahakoshal are smallest regions with 31 seats each.

Bundelkhand (32 seats): BJP swept the region in 2013 bagging 75 per cent of the seats. However, this time, the region is reeling under severe water-scarcity. There is also a signature campaign going on in the region demanding separate state status pending which people could vote for NOTA. The region is dominated by SC-ST population (32 per cent) followed by OBCs (26 per cent). Narottam Mishra (minister in Shivraj government) from BJP and Kunwar Vikram Singh from Congress hail from this region.

Vindhya (31 seats): Vindhya is one of the regions where BJP’s lead was the lowest in 2013. This region is dominated by SC-ST (33 per cent) followed by upper castes (29 per cent). The Savarn (upper caste) andolan is big here and unemployment a major concern. Ajay Singh, Leader of Opposition from Congress and Ajay Pratap Singh (Rajya Sabha MP) of BJP hail from this region.

Mahakoshal (31 per cent): Both Congress and BJP state presidents, Kamal Nath and Rakesh Singh belong to this region. The region is dominated by tribals (31 per cent) followed by upper castes (22 per cent). It is also one of the regions which witnessed a tough contest in 2013. Gonds which are part of the tribal community are unhappy with the BJP for installing a statue of Shyama Prasad Mookerjee instead of Rani Durgavati. The Gondwana Ganatantra Party has good presence in this region, especially Chhindwara and Balaghat districts.

Gwalior-Chambal (32 seats): The Gwalior-Chambal region has witnessed keen contest between the BJP and the Congress historically. While CM Shivraj Singh Chouhan is very popular here and many of his ministers come from this region, the royal family of Gwalior is also a major influencer in the area. The BJP is marking celebrations to commemorate Rajmata Vijaya Raje Scindia’s centenary year. OBCs comprise 32 per cent, SC-ST 29 per cent and upper castes 28 per cent of population. This region is the hotbed of Savarn Andolan in the state. Narendra Singh Tomar (central minister) and Jaibhan Singh Pawaiya (minister in Shivraj government) are top BJP leaders from this region. Jyotiraditya Scindia of the Congress comes from Gwalior Chambal too.

Malwa (65 seats): Malwa is the biggest region in MP and a BJP stronghold. The Ujjain Mahakal temple falls in Malwa. This region is also the centre point of agrarian distress. The Mandsaur firing incident happened in this region last year where six farmers lost their lives. The Congress is trying to exploit the situation here by promising complete farm loan waiver, while the BJP hopes that a bonus of Rs. 200/quintal for wheat for 2017 and 265 for 2018 will soothe the anger of the farming community. The SC-STs enjoy numerical strength here accounting for 38 per cent of the population. Kailash Vijayvargiya (national general secretary) from BJP and Jitu Patwari (working President) from Congress belong to this region.

Madhya Bharat (39 seats): BJP swept the Madhya Bharat region in 2013 and enjoyed the highest vote share lead amongst all regions - 16 per cent. The region has SC-ST population of 34 per cent and upper caste of 24 per cent. Arun Yadav (ex-President) of Congress and Vishwas Sarang (minister in Shivraj government) of BJP come from this region.

In 2013, three out of six regions witnessed turnout higher than the state average of 70.7 per cent. The regions in which turnout was higher than the state average was Malwa, Madhya Bharat and Mahakoshal. In all these regions, the BJP performed better in terms of vote share its state average. Turnout may hold the key in these regions this time too given the Savarn Andolan and general apathy of people to political class, with manu people expressing displeasure with thier MLA’s performance.

Out of the six regions, Gwalior Chambal and Vindhya are strong areas for the BSP. The difference of votes between BJP and INC in Vindhya and Chambal regions was 5 per cent and 4 per cent respectively, whereas BSP recorded 16 per cent and 17 per cent vote share therein. Both the regions have 63 seats in total, out of which 36 are with BJP, 23 with Congress and 4 with BSP. Chambal region has a high concentration of Scheduled Caste (SC) voters, especially in Datia, Gwalior, Morena and Bhind districts, considered the core component of BSP’s voter base. BSP on an average receives 15 per cent support of Dalits in the state.

Madhya Pradesh has 21 percent tribal population. Out of total 230 assembly seats, 47 are reserved for the ST community. The Jai Adivasi Yuva Shakti (JAYS) is highly active in ST populated regions of Malwa and Mahakoshal and is all set to spoil the prospects of BJP by looking for a tie up with the Congress. JAYS is fighting for tribal rights and for creating a leadership of Adivasis for Adivasis.

To sum up, the six regions of the state have been voting differently and the state is congregation of these regions. These regions have different dialects, food habits and traditions. This is also one of the primary reasons why there is absence of the asmita factor in MP. Hence parties formulate different strategies for different regions. The key is Malwa and Madhya Bharat combined, whoever wins here will ultimately form the government.