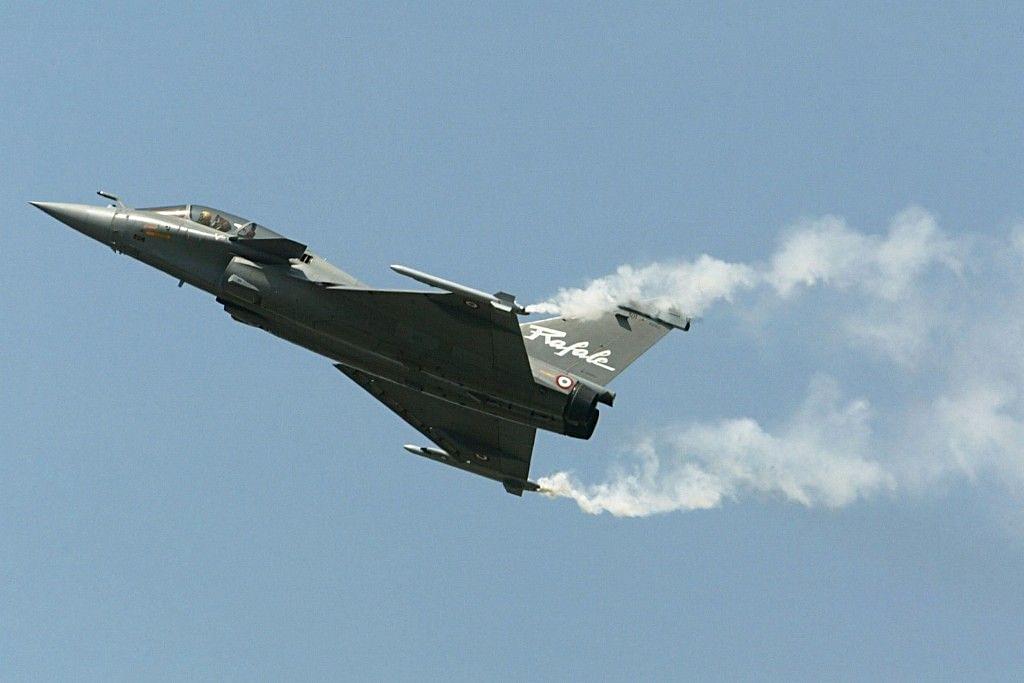 The hollowness and stridency of the anti-Rafale campaign has surprised all for its sheer brazenness and inconsistency. The government answers one point and the critics invent a new one to keep the pot boiling. Sample the shifting sands:

…and the goalposts keep changing

Before discussing the issue further, four facts need to be flagged here:

One, Rafale’s selection cannot be questioned as it emerged as the winner after gruelling technical and commercial evaluations under the previous government.

Two, the current order was placed through a government to government deal with no middleman/agent.

Three, no act of corruption or trail of slush money has been reported.

Finally, even the Supreme Court has expressed its satisfaction with the correctness of the deal.

With all these facts addressed there is a need to enquire about the purpose behind this continuous baying and unseemly mud-slinging. This write-up endeavours to unravel this mystery.

A Request for Proposals (RFP) was issued in August 2007 for the procurement of 126 fighters – 18 to be bought in fully built up condition while the balance quantity of 108 was to be manufactured in India by the Hindustan Aeronautics Limited (HAL) under transfer of technology.

Six manufacturers submitted their proposals. After extensive trials, two platforms were found technically acceptable – Dassault’s Rafale and European Consortium’s Eurofighter. Finally, Rafale emerged as the winner (L1) due to its lower life-cycle cost and an announcement to that effect was duly made on 31 January 2012.

Shortly thereafter, negotiations commenced with L1. However, even after prolonged meetings, the deal could not be concluded. By 2014, talks had reached a total impasse with no signs of a breakthrough. It became clear that the deal was dead for all practical purposes. The then defence minister A K Antony admitted so publicly. The Indian Air Force (IAF) was worried and made its disquiet known to the new government in no uncertain terms.

While on a tour of France in April 2015, Prime Minister Narendra Modi announced India’s intent to place an order for 36 ‘ready-to-fly’ Rafale fighter jets to meet emergent requirements. It was to be a government to government deal and at terms better than those offered earlier. IAF heaved a sigh of relief as it was a desperate measure to boost its diminishing strength. After detailed negotiations, the deal was concluded in September 2016.

No questions were raised by anyone when the government terminated the stalled deal or when intent to buy 36 aircraft in fly-away condition was announced or even when the contract was concluded in September 2016. The urgency was appreciated and the government to government deal was found to be the best way forward.

Reasons For Non-Conclusion Of The Earlier Deal

It remains a mystery as to why a deal so critical to India’s defence potential could not be concluded even after 28 months (Jan 2012 to May 2014) of intense negotiations. Nevertheless, a number of reasons are being cited in the media – Dassault’s reservations regarding HAL’s capability to absorb high technologies, refusal of Dassault to stand guarantee for the aircraft manufactured by HAL, and requirement of excessive man-hours by HAL, thereby escalating cost and delaying the production schedule.

In addition, in early February 2014, Antony dropped a bomb by announcing, “There are complaints about the procedure of calculating the Life Cycle Cost and that issue is not yet settled”. He further added that the government had no funds to buy the fighters.

Both the reasons were bizarre, to say the least. Rafale was declared L1 in January 2012 and no one questioned the methodology at that time. Why this belated reaction? Why was the farce of finalising contractual provisions (including transfer of technology to HAL) continued with Rafale for two years when the very basis of selecting Rafale was suspect?

As regards non-availability of funds, no procurement proposal is ever initiated without assured availability of funds. Financial adequacy is a pre-requisite. One wonders as to how a sovereign nation could carry on negotiations with a foreign defence manufacturer without committed funds. Was it just a sham exercise?

The latest press reports reveal that considerable pressure was being exerted by the losing competitor Eurofighter. Reportedly, a strategy paper for its promotion has been recovered that indicates involvement of Christian Michel and Guido Haschke. Many fear that the fighter deal was scuttled by vested interests who did not want India to buy Rafales. They wanted the case to be aborted and fresh bids invited. It is time-tested ploy used by many losing competitors.

As a last-ditch effort, Eurofighter submitted a fresh unsolicited bid to the Modi government on 4 July 2014, reducing its earlier commercial quote by 20 per cent, making it lower than that of Rafale. However, there was no way a revised bid could be accepted by the government. The Defence Procurement Procedure does not permit it at all, and rightly so. No deal can ever be finalised if the competing parties are allowed to keep underbidding each other after the commercial quotes are opened.

In an article by this author in the Indian Defence Review the contours of the vulnerability map of India’s defence procurement procedure had been identified. This sort of mapping is crucial to identify stages where the system could be subjected to external influences and to indicate the degree of such vulnerability.

Stages where the procedure was found to be vulnerable to unfair manipulation included initiation of proposal and allocation of priority; formulation of qualitative requirements; field trials; staff evaluation; determination of lowest bidder; acceptance and implementation of offset obligations; and grant of final approval.

For various stages, the degree of vulnerability to corruption was graded as least, moderate, considerable and maximum. Most revealingly, ‘grant of final approval’ was the only stage that got graded ‘maximum’, implying that it was most vulnerable to corrupt practices. Let us try to understand this stage further.

After concluding negotiations with L1, the Contract Negotiation Committee submits its report to the defence minister for acceptance by the competent financial authority (CFA). No deal can be concluded unless the CFA accords sanction. CFA can hold up a proposal indefinitely or raise incessant queries. The authority can even let a case lapse.

Having gone through agonising technical and commercial evaluations, the stakes for L1 are exceedingly high at this stage. The deal is within their reach. Consequently, they are extremely susceptible to arm-twisting and can be coerced to shell out bribe money. It is a possibility that huge amounts have to be paid to ‘buy’ CFA sanction and hence most vendors factor it in their initial commercial bid itself. Such bribes carry the taxonomy of ‘facilitation money’.

The fighter deal could have followed a similar path. Rafale was declared L1 on 31 January 2012. It is apparent that the real reason for not signing the contract was either Dassault’s failure/refusal to oblige or gratuitous intervention by the Eurofighter.

Hence, it was belatedly ‘discovered’ that the methodology adopted to determine L1 needed a relook, that too after discussing contractual minutiae with Rafale for over two years. Can there be a more ludicrous excuse to stall the case! Interestingly, the Eurofighter is already facing allegations of misdemeanour in its sales to many other countries.

Timing Of The Criticism

As stated earlier, there was no criticism when Modi announced India’s intent to buy 36 aircraft nor when the deal was concluded in September 2016. On the contrary, many observers called it a masterstroke to meet emergent requirements of the air force. Suddenly, in November 2017, the deal came under flak and was termed a scam for non-adherence to procedure, escalated cost and promotion of a private company at the cost of HAL.

The timing of the anti-Rafale campaign is revealing. Two related developments need to be recounted here. First, there were reports in a section of media that the air force was considering procurement of two more squadrons of Rafale in a fly-away condition as an interim measure as the fresh case for 110 fighters would have taken unacceptably long to fructify.

Incidentally, both Rafale and Eurofighter figure in the list of six vendors who have responded to the new request for information (RFI) wherein 15 per cent fighters are to be bought in fully built condition and the balance to be indigenously manufactured through a strategic partner.

Secondly and more importantly, in January 2017, the Indian Navy issued a RFI for purchasing approximately 57 multi-role fighters for operation from aircraft carriers. It was hinted that the contract could become bigger with additional procurements through the option clause.

Four manufacturers have shown interest; Rafale is reported to be one of them. For India, it makes sense to opt for Rafale, provided it emerges as the lowest technically acceptable bidder. Synergy of operations and commonality of infra-structural facilities will prove immensely beneficial.

The anti-Rafale campaign has become more strident of late. The sole aim is to prevent Rafale from bagging further orders. Some planted articles have gone to ridiculous limits, questioning the suitability of Rafale for India. According to certain sections of the media, Rafale is the wrong choice. Rafale was invited to participate in trials in August 2007 – wonder why it has taken these ‘learned people’ over a decade to get ‘enlightened’ about the unsuitability of Rafale!

Let us look at some interesting aspects of the whole conundrum. Rafale is an excellent fighter aircraft. It has proved its mettle in wars. The air force selected it after gruelling competitive trials in which it emerged the winner. India is purchasing it duly configured with latest add-ons as per its operational requirements.

Purchase of two squadrons in a fly away condition was the quickest way to cover critical gaps in India’s air capabilities till a fresh case fructifies. The deal was a government to government contract with no middleman and decidedly on terms more favourable to India than those offered in the aborted case. There is no slush money.

Yet the criticism goes on unabated, albeit with newer allegations concocted at regular intervals. Even when an allegation is duly rebutted with facts, the critics decline to debate the replies but keep harping on newer allegations. The sole aim is to keep throwing mud, in the fond hope that some of it would stick. Subjective stories are planted by certain sections of the media, to raise questions about the sanctity of the procedure followed. Some of the media persons start casting aspersions on the quality of the system being procured.

Corruption must be exposed but it is anti-national to stall modernisation of the armed forces by resorting to witch-hunting with wild accusations to settle political scores. The decision-makers (political leaders, bureaucrats and the military brass) get deterred by such a scenario. They consider it safer not to conclude any defence contract during their tenure lest they get hounded later in life for the decisions taken in good faith. The defence potential of the country should never fall prey to political slugfest. That shall prove perilous.