Why Saleem, Who Became Susheel Two Months Ago, Wants To End His Life 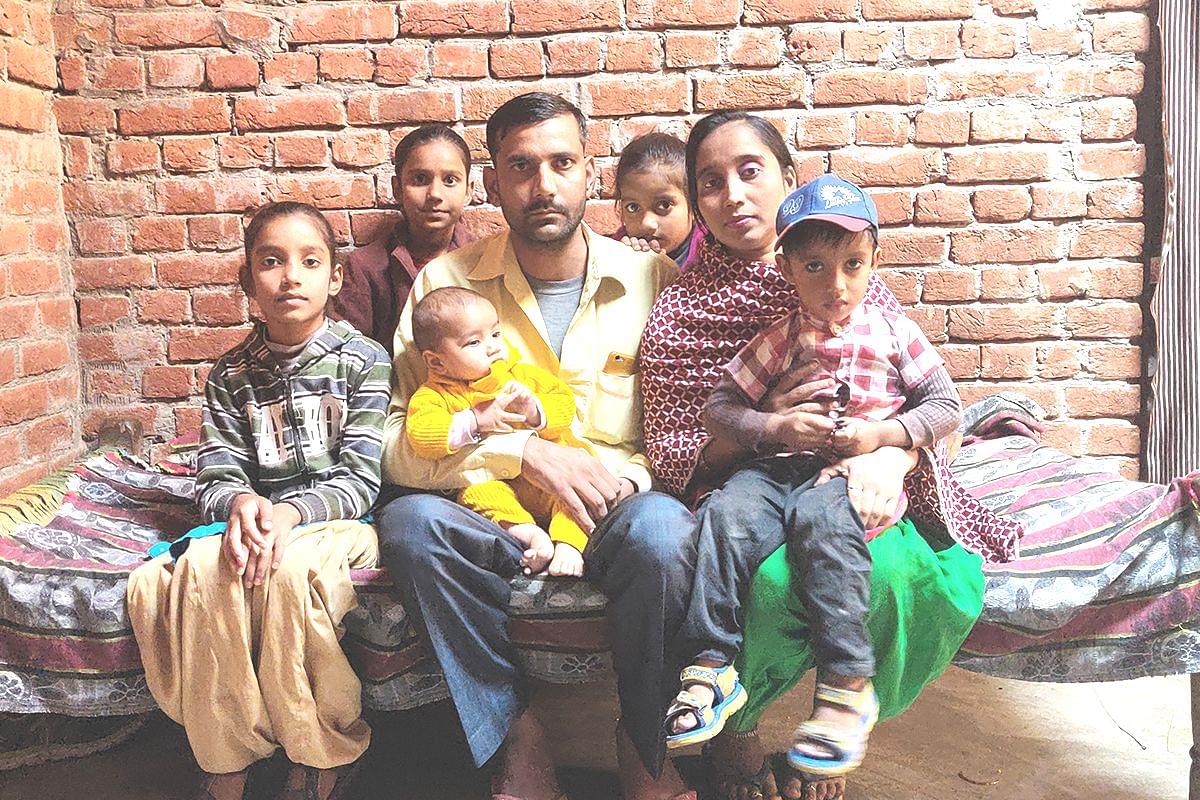 Susheel, his wife Wajida and their children at their house in Shamli on 29 November. (Swati Goel Sharma/Swarajya Magazine)

Some faiths are tough to leave, despite the Constitution allowing it as a fundamental right. Those who dare to leave invite wrath, and face violence and abuse.

Susheel (born Susheel, made Saleem, chose to be Susheel again), a resident of Uttar Pradesh’s Muzaffarnagar district, has learnt it the hard way.

Two months ago, he decided to formally embrace Hinduism after years of deliberations. His wife, Wajida, cheerfully told this correspondent at that time that even though she would continue to worship Allah, she would stand by her husband and accept the legal formalities.

Thus, at the age of 31, Saleem became Susheel after giving a name change application in the local district court. He also participated in a ritualistic havan organised by a Hindu organisation.

His wife and children are no more with him. He is a broken man. He has been told that the only way he can get back his family is by converting to Islam again, proving the loyalty by consuming beef, and serving the religion for six months.

This correspondent first reported about Susheel on 30 November.

He said at that time that he was born in a Hindu family of Jats in Muzaffarnagar’s Kairana town. He was rendered an orphan at the age of eight after both his parents died in an accident. Though some of his relatives became his guardians after the tragedy, they ill-treated him. He ran away from their house.

A truck owner, Mohammad Sabdar, took him in as a conductor. Sadbar did not pay him but provided him food and clothes. He called him Saleem.

It was Sabdar who arranged his nikah with Wajida when he turned 15. In the nikahnama, Susheel was formally made Muslim for the first time.

Susheel told this correspondent that he was well aware of his Hindu birth and secretly wished to be called a Hindu again. He could, however, fulfil his desire only when Sadbar’s hold on his life was over — more than a decade after his marriage.

On 25 November, he gave a name change application in the district court.

Susheel faced instant hostility for his decision from the neighbouring Muslim family. The same day, the neighbours allegedly attacked his family in his absence, objecting to his religious conversion.

The same day, Susheel submitted a complaint at the local Shamli police station (copy attached below).

It reads (as translated),

“Saleem, a resident of Nai Basti in Shamli, was converted in 2003 by Sabdar when he was a minor. Saleem now wants to return to his religion now that he is a major. No Hindu family is pressuring him to do so. Saleem wants to become a Hindu out of respect for his ancestors. Some people in the colony have abused him for his decision and are threatening to kill him.”

A week later, on 2 December, Susheel gave another complaint to the Shamli police.

It said that his neighbours were trying to not only harm his family but also frame him in a false rape case. He identified the assaulters by their name as Asma and her husband Kalu, along with Mehtab, Aftab, Kala, Sahib, Jahid and Sahima.

After this correspondent reported about the complaint, the official Twitter handle of Shamli police replied on 6 December that directions had been issued to the concerned authorities for action.

The next day, Susheel told this correspondent over the phone that a cop had been deployed outside his house. Susheel, however, said he was constantly worried for his family as he works as a truck driver and is often away from home for days at a stretch. The cop, he said, guarded the house only between noon and early evening.

Things continued this way until the last week of December when his father-in-law, Israel, visited him from Jharkhand. Susheel says Israel had come after learning of his conversion and spent several days convincing him to revert his decision.

“He would tell me that I would burn in dojakh ki aag [eternal hellfire]. He said that’s the punishment prescribed for anybody leaving Islam. He told me the entire family would have to bear the consequences for my ill-thought decision,” says Susheel.

“He also abused my Hindu religion a lot. He spoke with disgust about our idols and deities,” he says.

One day, when Susheel was away from the house, Israel, along with Susheel’s wife and his five children, quietly left for Jharkhand.

Susheel says both Israel and Wajida switched off their phones so he could not contact them. When they switched on their phones after a day, they didn’t answer any of the multiple calls made by Susheel.

It was only with the help of a local cop that Susheel managed to talk to Israel and learnt that they were all in Jharkhand.

Clueless on how to proceed, Susheel gave yet another application to the police on 25 December.

His letter stated that he was living peacefully with his family in Muzaffarnagar before his father-in-law arrived. He started brainwashing his wife. Under his influence, she left the home with him on 24 December. She also took away Rs 1.5 lakh in cash, jewellery worth Rs 80,000, papers of Susheel’s house and various government-issued identity cards such as Aadhaar.

The letter said that Susheel’s wife and children too had converted to Hindu religion.

After a few days, Susheel locked his house, informed his employer and left for Jharkhand.

On 16 January, this correspondent received a video from Susheel on WhatsApp. In the self-recorded clip, Susheel said that he could die any moment as he did not have the will to live anymore.

In the video (embedded below), Susheel said (as translated),

“I, Susheel Kumar, used to be Saleem. I only recently changed my religion. When they changed my religion, I was still a child. They snatched away my happiness and peace. They are filled only with Jihad, nothing else. They made me a Muslim, used me and got me married. I passed a difficult ten years after that. Eventually I decided to come back to Hinduism.

“My wife’s family always knew that I was born a Hindu. My wife assured me that she would never snatch my children away from me after my conversion. But now, she has become my foe. Her father, mother and brothers-in-law have turned up against me. They took away my children from me. They are pressuring me to become a Muslim again. They are threatening me to kill my children if I don’t do so. I say, kill me. I will die only in my religion. Do whatever you want to. I won’t back down anymore.

“For seven days, I stayed with her family. They only played with my emotions. They will turn my children into Jihadis. They won’t give any good teaching to my children. I appeal to Hindu organisations that if you can, get my children out of their custody. I don’t have the will to live anymore and I can die any moment. Give my children a good education. If they are raised in a good environment, give them my house, which is all the property I have. Else, give my house to an orphanage. Don’t give it to my wife. I don’t want to live anymore.”

This correspondent immediately called up Susheel and advised him against taking the extreme step. Susheel, who said he was at the Ramgarh Cantonment railway station then, agreed to the suggestion that he should return to UP for the time being.

Susheel returned to Muzaffarnagar, but alone and dejected.

He says he stayed in Jharkhand for about a week, trying to convince his wife‘s family to support his decision. To no avail.

“My in-laws constantly abused my religion and told me that I would forever burn in hellfire for the sin of leaving Islam. One day, my father-in-law took me to a mosque in order to put community pressure on me,” he says.

“Eventually, he [Israel] said my marriage is not valid anymore. He said I must convert to Islam again if I want my wife and children back.”

Susheel says that in one desperate moment, he relented and agreed to read the Kalma again. However, he wasn’t prepared for his father-in-law’s next salvo.

“At one point, I decided that in my heart, I would continue to be a Hindu but would take the name of Saleem again. I wanted my children back desperately. It turned out that it wouldn’t be enough,” he says.

“They told me I must stay in Jharkhand with them for six months and serve the religion. They told me I will have to join a jamaat.”

Susheel says he was shocked, but gathered his wits and agreed to the condition. But, even that wasn’t enough. His father-in-law now demanded Rs 1 lakh from him as an added condition, he says.

After his return, he gave another complaint to the Shamli police station.

In the letter, dated 23 January, Susheel said that his in-laws are not only pressuring him to convert to Islam, but also demanding Rs 1 lakh in cash from him. The family is threatening to kill his children by poisoning them if he did not give the amount. His children are being taught bad things in Jharkhand.

Multiple calls made to the Shamli police by this correspondent went unanswered (this copy will be updated when they respond).

Susheel said that a cop told him that they were clueless on how to proceed in the case given that his wife is a major and has left the house on her free will.

Susheel says his in-law family depends a lot on his income, however meagre.

“Wajida’s family is quite poor. They don’t have a stable income. I have gone out of my way to support them all these years. Come and ask anyone in my area and they will tell you that it was I who paid for the weddings of Wajida’s two sisters,” he says.

Susheel just doesn’t know what to do to get his family back. “Their demands keep on increasing. I supported them these years thinking they are family. It looks like all they want is their religion and my money,” he says.

Susheel sounds shattered. At times, he vows to die a Hindu; at other times, he dismisses all religions and talks of suicide.

Susheel shared with this correspondent a few videos of his visit to a park in Jharkhand along with Wajida and their children. It was “two or three days” before he returned to UP.

In the videos, Wajida looks cheerful and talks about being with her husband forever.

Susheel says his wife is too scared to go against her family and her faith to keep the promise.