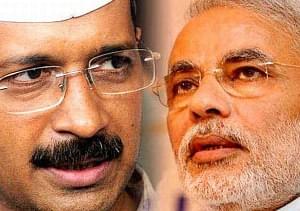 Will AAP’s clean politics trump Modi’s development promise is more than a million dollars question. The nation would watch breathlessly the mandate of Delhi on this

With Delhi assembly election results just a few days away, curiosity, suspicion and apprehension have risen about its final outcome. Many pollsters and agencies are giving Aam Aadmi Party (AAP) an edge over BJP both in terms of votes and seats. Despite that, Yogendra Yadav, AAP’s leader and an accomplished psephologist himself, has contested survey findings by saying that the agencies have been underestimating AAP, and the real vote share differential between his party and BJP would be about 13 percent. That would mean a clean sweep for AAP. If that happens, will it mean approval of the new politics of AAP that takes high moral ground and promises to govern for the good of subalterns and marginalised? Will that also mean that AAP’s new politics would trump the issue of development raised by Prime Minister Modi?

While guesswork about electoral outcome is always a risky proposition, both academicians and media persons have a tendency to indulge into that because that caters to public curiosity. The comfort zone for lay voter is that they all differ in their estimates. Also, survey research in big metro-cities are full of methodological risks:

(a) the respondents (voters) are usually not willing to talk and spend time with research investigators.

(b) if they talk, they are not willing to reveal their real voting intentions.

(c) since most of the researchers are hired by market forces, which want value for their money, there is a tendency among fieldsmen to compromise on quality of fieldwork and do some ghost interviews to show higher achievable rates generating data of questionable quality.

(d) and finally, the agencies base their predictions on such fictitious data. Delhi is a city-state and these risks are of very high order in Delhi.

Hence, whatever is being projected on various TV channels using market surveys must be taken with a pinch of salt.

Another difficulty in using survey data is how to convert vote-shares into seats for various parties. There is no known and commonly agreed upon scientific method for converting vote-share into seats. In first-past-the-post electoral system that operates in India, one can win elections by small or big margins. So, good vote-share for a party does not necessarily guarantee proportionate seat share. Secondly, designing of the instrument (questionnaire for voters) is a sophisticated job and requires tapping real political preference of the voter even if s/he tries to mislead the researcher so for as her/his voting preference is concerned. Many do not have either patience or caliber to design such questionnaires. Third, and this is most rampant, most of the questions try to draw voters preference about the leader or her/his government, and, in many cases, there is a tendency among psephologist to mistake that as preference for party or party candidate. More, timing of the surveys is also very important: as tickets are allocates and election campaign picks-up, there is greater dissent and resentment in parties and people; as election draws close, things cool down and party-men vote for their respective parties for want of any better option.

The Delhi BJP did face some initial hiccups and the pre-election choice of chief ministerial candidate Kiran Bedi may have demoralized some prominent BJP leaders aspiring for chief ministerial position. That might have got reflected in market surveys. But, the question is: do they have a choice now? Will such disgruntled elements vote against BJP and in favour of any other party, or not vote at all? The answer to all that would be a big no. They will return to the party fold finally.

Why AAP is in delusion about its success in Delhi polls in spite of Yogendra Yadav, the psephologist? One gets an impression that probably the party refuses to accept methodological risks of survey research in big city like Delhi. But, there are a few more pointers. One, people in Delhi are not that euphoric about AAP as they were in 2013 assembly elections. In that election, there seemed to be unprecedented wave for AAP that was linked to Anna movement’s high voltage energy. That background is missing this time. Two, previously, it was not just the subalterns, jhuggiwalas and autowalas who enthusiastically supported AAP, but a substantial segment of lower middle class and middle class that also worked as a top-up to AAP’s base constituency. That top-up is missing this time and seems to have made silent shift from AAP to BJP. Thirdly, Modi factor has not dried-up; it may also bring some accretion to the BJP vote share of 2013.

Besides, the BJP’s organizational sophistication has further improved and it has been able to percolate down to each household through the innovative mobilisational concept of ‘panna prabhari’. That would mean giving some party functionary responsibility to tap voters on just one page of the voters list – not just once but thrice before polls. We know that greater voters’ mobilization played crucial role in 2014 Lok sabha elections and to the advantage of BJP. Such voters usually do not go to polling booth for no reasons; but once at the booth they might be inclined to vote for development and strong PM, thus fulfilling BJP’s agenda.

In 2013 Delhi polls, despite euphoria for AAP, the BJP still emerged as a party with largest vote and seat shares. With the possibility of an add-on in form of lower-middle and middle class to its kitty this time, the vote share may go up further. All talk about Kiran Bedi’s authoritarian attitude may not click with such voters for various reasons: one, they know her police and no-nonsense background and may like to have her as strong CM; two, they may appreciate the futility of freebie politics and may appreciate Bedi’s offer of affordable and reasonably priced water and electricity etc; and, three, Delhi women may be persuaded to vote for Bedi as they might see in her a right person to handle women issues that are assuming alarming proportions in Delhi.

The final outcome of Delhi assembly elections may be known only on the 10th of February 2015 when counting is done. But, it is surely a tough battle between AAP and BJP. It is a unique development that a new party promising new politics has replaced an age old party, the Congress in Delhi’s electoral battle. Voters seemed to have awakened. They have pushed these parties to compete on development and clean-politics. Will AAP’s clean politics trump Modi’s development promise is more than a million dollars question. The nation would watch breathlessly the mandate of Delhi on this.