Will The Congress Step Out Of The Gandhi Family Gas Chamber? 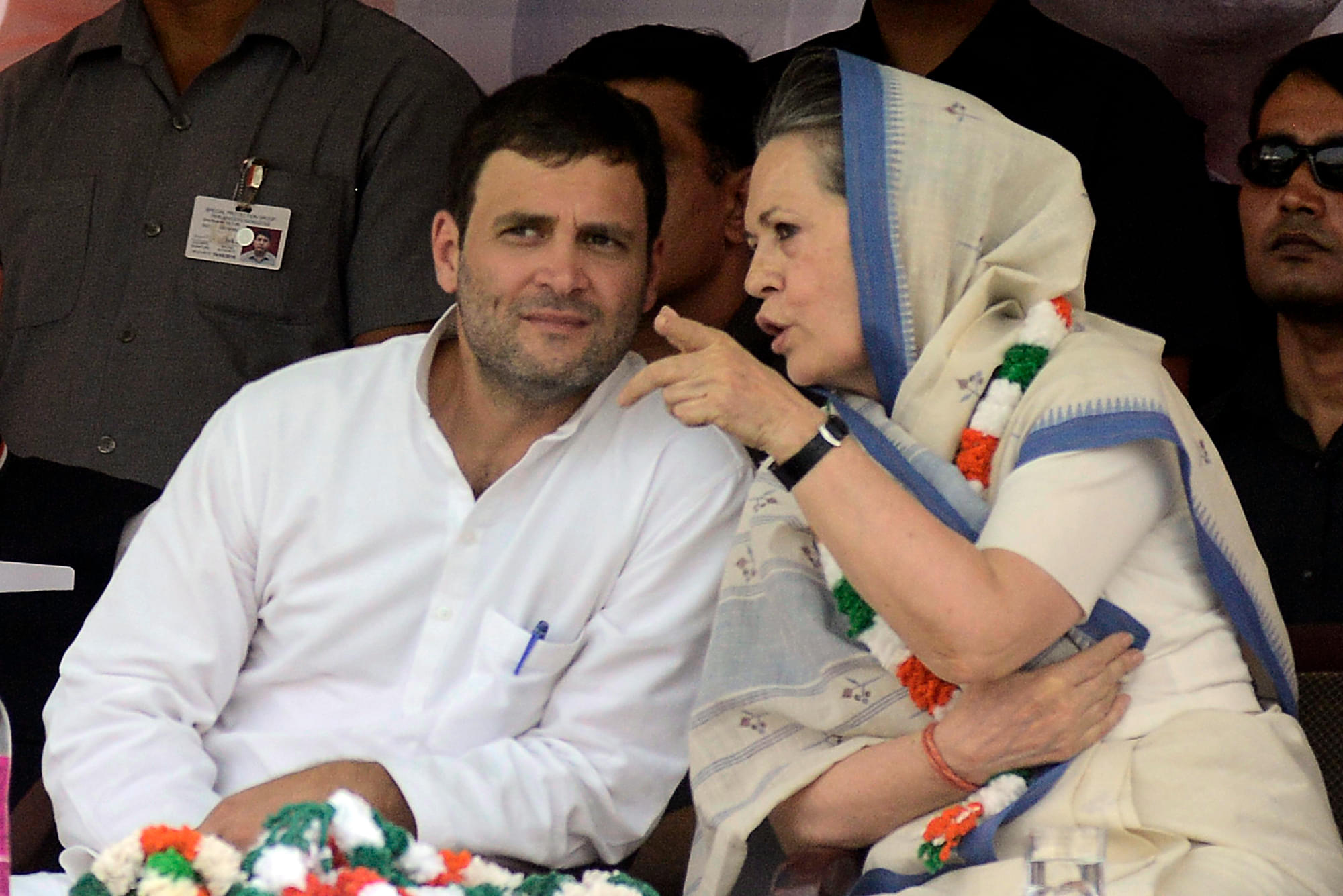 More than 10 years too late, Sonia Gandhi and Rahul Gandhi have finally been forced to look at the writing on the proverbial wall. The Congress president has formally taken responsibility for his failure to lift the grand old party, even marginally, above the shocking and humiliating bottom it hit in 2014, and resigned.

Unfortunately, not even a whiff of contrition or respect for the will and wisdom of the people emanates from Rahul Gandhi's resignation letter. Instead, it reeks of an undiminished sense of entitlement, hatred for the majority, fake love for Muslims and Dalits, and an almost missionary assertion that he will keep pushing the Congress party to strangle itself with his ‘Idea of India’.

It matters not to him that this so-called idea, alien to even his own father, has been so vehemently rejected by the people of India, that they have not only reduced his party to a once unthinkable 23 seats in all of India outside Tamil Nadu and Kerala, but also handed him a humiliating personal defeat in the family bastion of Amethi.

Sonia Gandhi too continues, overtly unfazed, as the chairperson of the United Progressive Alliance (UPA), and together the duo have evidently no intention of gracefully stepping aside and giving the Congress, gasping for fresh air, a chance to rise and reclaim its place as the premier national political party of India.

Although the duo ruled India for 10 long years, a closer examination of all the elections that they have been actively involved in, especially the two verdicts that gave and kept them in power, reveals that, despite their power surname, Sonia Gandhi and Rahul Gandhi have not won a single election for the Congress party, and should have quit in or before 2009.

In 2004, only eight seats separated the Congress (145) and Bharatiya Janata Party (137). That was a verdict against the government of Atal Bihari Vajpayee, and not, by any stretch of imagination, a vote for Sonia Gandhi. Between 2004 and 2009, even though no scam had yet come to light, neither she nor Rahul Gandhi was able to enthuse Indians to come out and vote them in again. On the contrary, they lost a string of states during this period — Uttar Pradesh, Gujarat, Karnataka, Punjab, Himachal Pradesh, Uttarakhand, Madhya Pradesh, Chhatisgarh and Jammu and Kashmir. Their victory in Delhi was due to Sheila Dikshit, and in Rajasthan, they won only 96 seats to BJP’s 78, despite the fact that the latter had 60 rebel candidates out of whom as many as 27 won.

Their 2009 ‘victory’, thus, not only came as a surprise to many, but it also led even BJP leaders to hastily conclude that their party was past its peak, and Sonia and Rahul Gandhi would rule India, unchallenged, for decades. In hindsight, it is evident that nothing could have been farther from the truth.

What should have been an easy victory for the BJP in 2009 turned into a big shock defeat for two main reasons.

One, Sonia Gandhi, sensing that there was no enthusiasm for her and Rahul Gandhi among the people, played a masterstroke by making Prime Minister Manmohan Singh — "Singh is King” — the face of the Congress party. Singh, who had a clean image, had caught the imagination of the people with the manner in which he pushed the nuclear deal; in that act of his, they saw in him a patriot who had stood up to Sonia Gandhi, to protect India’s national interest. That solitary display of spine and intent by the prime minister led the people to believe that India was safe in his trustworthy hands.

Two, just a year after the 2004 debacle, causes for which he evidently misread, Lal Krishna Advani went to Karachi and called Jinnah secular. With that one blunder, he lost forever the trust of many of BJP’s core voters and destroyed his political career. To make things worse, in 2008 he blundered by not only opposing Singh’s nuclear deal, but in also trying to bring down his government and installing Mulayam Singh Yadav as prime minister, in a clumsy and shady manner. That killed whatever little enthusiasm there still was among core and potential BJP voters, and they showed their anger by staying at home on voting day.

So when a crafty Sonia Gandhi surprised everyone by projecting Manmohan Singh, and not her own unpopular son, as the prime ministerial candidate, Advani, imagining that the mild Singh was no match to him, played right into her hands. He made the contest presidential, which effectively put Sonia and Rahul Gandhi out of the contest. The rest is history. In that direct battle of trust, people made Singh the king and knocked Advani out.

Unfortunately, everyone, docile Singh included, soon forgot that people had voted for the prime minister, and that the Gandhis were undeserving beneficiaries of the faith that people had reposed in Singh who, as it appeared then, had also got the economy roaring. Instead, even though the Congress won just 206 seats, the family ecosystem built an aura of invincibility around Sonia Gandhi and put her on a pedestal above all, and beyond any criticism by anyone, BJP leaders included.

It took five more years and Narendra Modi — not to forget social media that ‘routed’ embedded mainstream media in a parallel battle — to shatter that myth of invincibility. And it has taken another five years, and an even more humiliating defeat, to ram home the truth that Rahul Gandhi and his mother never could, and never will, win the trust of the people of India.

Perhaps, Rahul Gandhi too had sensed the mood of the people in the run up to 2019; that is why he allegedly struck a Faustian bargain with Indian Union Muslim League to enter India’s Parliament. Who would have imagined in 1947 that 72 years after a bloody, communal Partition, the president of the Congress party would be reduced to such communal beggary, in India?

Unfortunately, going by the cringe-worthy sycophancy displayed by senior Congress leaders, many much older, and all certainly wiser, than Rahul Gandhi, there is little hope that the Congress party will break free from the shackles of the Gandhis, despite the fact that they have not been able to win a single national election for the Congress since the assassination of Rajiv Gandhi in 1991.

After 18 years of failure and a disconnect with the people that is almost surreal, it is unbelievable that, in an arrogant display of sheer contempt for voters whose trust they never could win and have now irretrievably lost, they are still marketing themselves as the last and only hope for the Congress.

The grand old party is in the agonising throes of death. It is gasping for fresh air and not more of the family gas that is choking it.

The BJP faced a somewhat similar situation after its tally dropped to 116 in 2009. That party too had an entrenched cabal that did not want to give up its power and perch, party’s fate notwithstanding. Had its key leaders not made the inspired choice they did in 2013, it would probably have found itself staring at 44 seats in 2014 and irrelevance in 2019.

Captain Amarinder Singh, Jyotiradiya Scindia and Sachin Pilot, to name just three, are all capable of reviving the Congress. They can all do what Manmohan Singh did for the Congress in 2009, and more, sans the Gandhis. The family ecosystem never tires of praising them and the huge talent pool that they say the Congress has. But at this most critical moment in its history, it continues to peddle the lie that the Gandhis are the irreplaceable glue that is holding the 183-year-old party together.

Does the Congress have a Rajnath Singh who can pull the party out of the Gandhi gas chamber before it is too late, and oversee a smooth and complete transition of power?