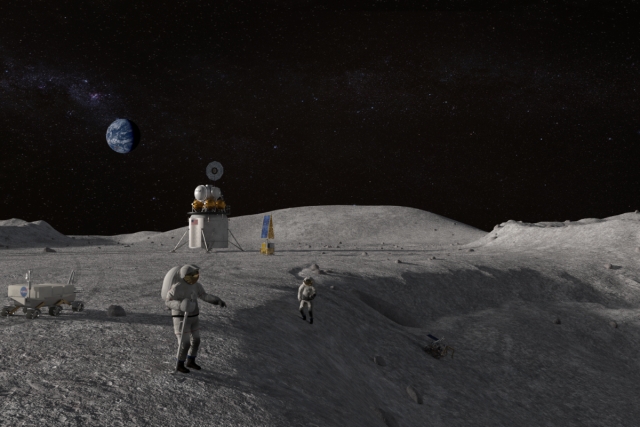 When astronauts go to the Moon in the future, they will eventually live and work there longer. (Credits: NASA)

The document outlines the preparations underway and the approaching stages and milestones in the run-up to landing the first woman and next man on the Moon.

Nearly 50 years have passed since humans last walked on the lunar surface.

After all this time, the United States (US) is making a strong push to make a return to Earth’s nearest neighbour and use the experience to consolidate lunar activity and move out past the Moon in the future.

“America is on the verge of exploring more of the Moon than ever before,” NASA Administrator Jim Bridenstine writes in the foreword to the report.

The Artemis plan encompasses two goals — land humans on the Moon in 2024 and lay the foundation for sustainable lunar exploration in the second half of the 2020s.

For this to happen, the tools have to be in place. The major component parts that will take humans to the Moon are the space launch system (SLS), the Orion spacecraft, the human landing system (HLS), and the exploration ground systems (EGS), collectively making up NASA’s deep space transportation system.

The SLS is the heavy-lift rocket that will launch Orion from Earth and send it on its course to the Moon.

The HLS will land astronauts on the lunar surface and take them back to orbit for the return journey to Earth.

The EGS will comprise the ground systems facilitating the assembly, transport, and launch of the rocket.

The SLS and Orion, according to the Artemis report, are nearing the end of testing and development.

The core stage and the four accompanying engines are undergoing final runs that will culminate in a critical hot fire test later this year.

NASA expects to pick out the “most mature” design for its mission by early 2021.

There are also details in the document about the “gateway” — a critical cog in the mission wheel that will someday serve as an orbiting outpost to the Moon, much like the International Space Station is to Earth.

The plan is that later Artemis missions entering lunar orbit will dock at the gateway before proceeding further.

Most notably, human landers will descend to the lunar surface from there.

However, while the gateway is being developed, it is not likely to be used in the main Artemis mission.

Starting next year, a series of missions are scheduled to take off.

First up is Artemis I. The Orion spacecraft will be launched by the SLS to go around the Moon — some 65,000 km beyond it — before returning after a period of four to six weeks for an Earth re-entry at the high speed of Mach 32.

This flight test will inform mission managers about the performance of the SLS rocket throughout the journey and the heat shield during re-entry when it will get half as hot as the Sun’s surface.

Life support and communication capabilities will also be assessed. And since there is excess space, the mission will deploy 13 CubeSats, some of which will relay data about the lunar environment back to Earth.

Next up is Artemis II. Four astronauts will be launched to the Moon as part of this mission.

“This will be the Artemis Generation’s “Apollo 8 moment,” when the astronauts aboard Orion will capture the full globe of the Earth from afar, as a backdrop to the Moon,” the report says.

A new test has been outlined in the document for this second installment.

When in high-Earth orbit, after Orion separates from the interim cryogenic propulsion stage, astronauts will pilot Orion in the manual mode.

They will size up the stage as they approach and back away from it with the goal of assessing Orion’s handling qualities.

This second installment will stretch out to 7,400 km beyond the far side of the Moon, returning to Earth in about 10 days and splashing in the Pacific Ocean.

The crew will be helped out of there by recovery forces waiting for them at the target landing zone.

The experience gained on this mission, especially with aspects like rendezvous and docking, will be critical since it cannot be simulated faithfully on Earth.

The third Artemis mission, the one where history will be made, will ferry four astronauts to the Moon but this time to get their feet down to the surface. The year will be 2024.

The spacecraft will land at a predetermined location at the lunar South pole based on high-resolution data from NASA’s lunar reconnaissance orbiter.

The site will be chosen based on factors like access to sunlight, the quality of the terrain for ease of landing and mobility, and proximity to permanently shadowed areas where water ice may be present.

During their week-long stay, astronauts will go on moonwalks in their next-generation space suits lasting roughly four hours.

At some point, they will collect a variety of lunar samples to bring back home in addition to conducting a range of science experiments.

When it’s time, they will get into the lander to return to lunar orbit before hopping on to Orion and making the trip back. The return journey to Earth will take three days.

Though Artemis III is the mission in focus, NASA has its eyes set on more elaborate lunar missions in the future, where components like the gateway (with enhanced capabilities) would facilitate longer and more substantial space exploration rounds.

The first two components of the gateway, the power and propulsion element and the habitation and logistics outpost, will be integrated and launched on board a single rocket in 2023. This would make more ambitious plans possible.

The report touches upon the proposed Artemis base camp accompanied with a host of relevant lunar infrastructure such as rovers, power systems, and habitats.

The hope is that some of the lunar resources could be harvested in order to reduce dependence on missions back and forth.

It all looks a bit like the scenes from the science fiction film Ad Astra, though the real missions would be modest in comparison.

In any case, such a plan envisages lunar expeditions lasting up to two months, far greater than the week accorded in Artemis III.

Beyond long-term sustainable exploration of the Moon, a human spaceflight mission to the red planet is on the cards.

The Artemis experience is expected to serve that cause. And NASA isn’t holding back. “The sooner we go to the Moon, the sooner we send astronauts to Mars,” says the report.

This “Moon to Mars” approach promises to take human exploration of space, in particular deep space habitation, to new heights this decade. But it will all hinge on the successful demonstration of the Artemis missions.

Also Read: Explained: The Idea Of An Observatory On The Moon To Detect Gravitational Waves