One Year Of Covid-19 Vaccinations In India: 156 Crore Reasons For Satisfaction 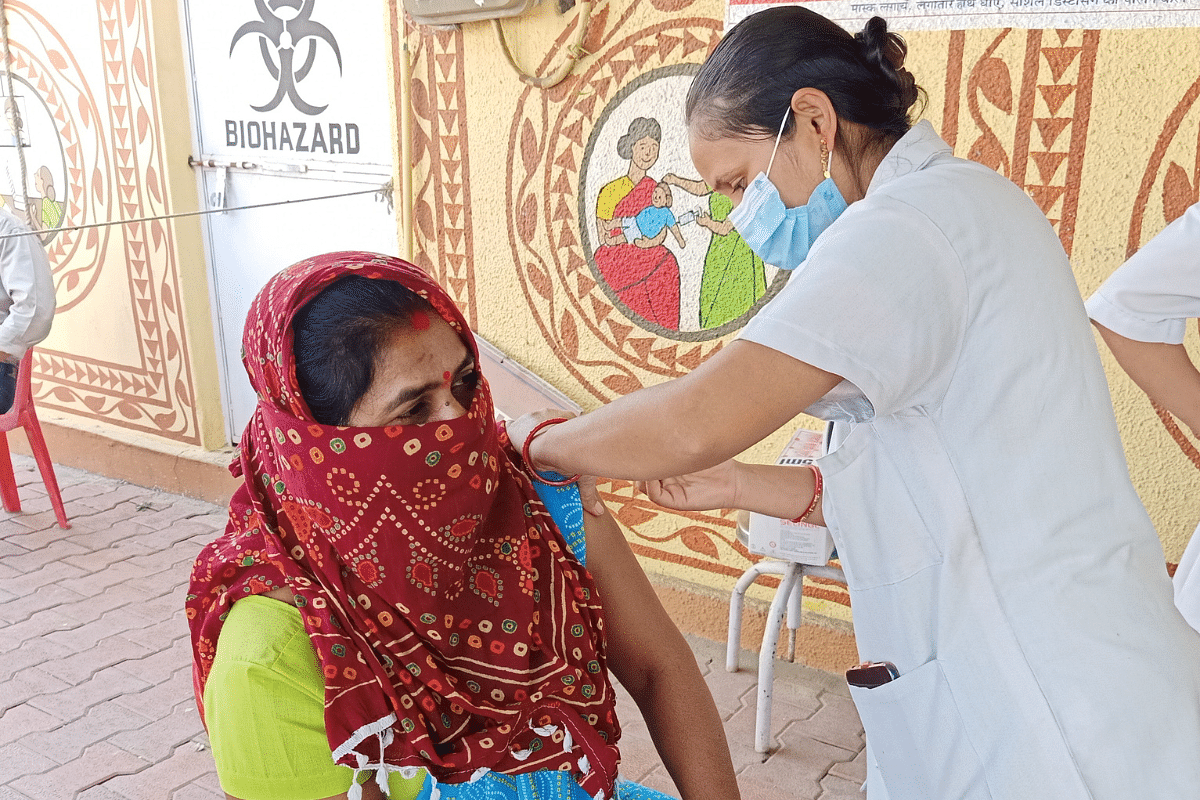 This is not the Indian GDP (gross domestic product), but the number dryly reported by the 7 pm Press Information Bureau (PIB) report on 15 January 2022 for total Covid-19 vaccinations in India to date.

By the end of the day, the number would tick past 156.7 crore on the CoWin dashboard.

These reports have been made every day — except Sundays — since the Day 1 report on 16 January 2021. The Sunday figures are on the webpage of the Ministry of Health and Family Welfare (MoHFW), which is another daily report whose numbers this author has parsed and analysed for months, except this report reads Day 365.

This article is a chronology of the events in the past year.

The PIB reports themselves are an immediate indictment of one argument early on that the Government of India wasn’t reporting data on vaccinations. But, to the contrary, it’s been diligently doing so every day.

However, we all know what they’re really complaining about — that the government doesn’t offer them inside access; far fewer articles now claim something ‘according to unnamed sources’.

If someone asserted a year ago that India would have completed close to 160 crore vaccinations in the next 365 days entirely with domestically made vaccines, few would believe it.

The biggest story of that time was to heap scorn upon the early restricted emergency-use authorisation (EUA) given to Covaxin. Everyone weighed in with their pet witticisms about the allegedly unscientific and incompetent group of people running the show.

None of those articles aged well. Covaxin has been used 200 million times so far. It reported successful neutralisation of the Beta and Delta virus variants, and more recently the Omicron variant too. Having also recently made it to the World Health Organisation's Emergency Use List (EUL), the vaccine has come full circle.

Meanwhile, 1.6 billion doses of Covishield have been produced to date. Unlike Pfizer-BioNTech, which is produced across multiple sites in the United States (US) and European Union (EU), every dose of Covishield comes from one plant in Pune — the single-most prolific vaccine production site on the planet.

When Covid-19 vaccinations began, a creative picture of what would ensue was as follows: the West would harness cutting-edge technology and eye-watering amounts of financial resources to develop great but expensive vaccines.

China would do what it’s great at doing — make large volumes of vaccines of passable efficacy and flood the world with it.

Russia would come up with some quirky vaccine of its own. Japan would leverage its technological base and manage the situation. And India would bumble along at a glacial pace.

And why not? Many in India claim Pulse Polio as a signpost of success and competence in eradicating polio. Yes, it finally helped, but consider which country eradicated polio when. India was fourth… from last, years behind Somalia, Ethiopia, and Sudan, which are all desperately poor and strife-torn places that deserve huge credit for outdoing us, as detailed in this article.

India was a country that could not, until recently, do anything related to public health in a time-bound manner. It depended on and even normalised acts of charity and involvement of non-governmental organisations (NGOs) in as basic a constitutional executive responsibility as public health.

Surely, it would do the same this time — wait for Pfizer or Moderna to be available with financial support from deep Western pockets funded by billionaires, with their own agendas that we would also be subjected to.

All of those stereotypical views turned out to be accurate, except in India’s case. Rather than bumble along, India is set to surpass Europe and North America — the entire developed Western world — in the percentage of population vaccinated at least once, within the next few days.

The Indian figure was 62 per cent at the start of the year, but strongly accelerated due to the 15+ age group being eligible and almost 34 million of them vaccinated in just two weeks.

All of those vaccines were made in India and paid for by domestic sources — tax revenues and the enormously popular Prime Minister's Citizen Assistance and Relief in Emergency Situations Fund (PM CARES Fund).

Let’s look at the costs now. All the order information can be obtained online for India, as this author has collected. The combined order spending to date is a little over Rs 43,000 crore, as shown here, of which Rs 35,000 crore comes from the Union Budget 2021 announced last year, and the rest from the PM CARES Fund and additional in-year allocations:

The Corbevax order has a balance yet to be paid according to the best public information available — Rs 1,500 crore is the advance. Adding that, let’s say the total is Rs 50,000 crore. Add maybe Rs 5,000 crore in additional spending for such bodies as the Department of Biotechnology (DBT) and the Indian Council of Medical Research (ICMR) — data obtainable from the next budget — and the gross total is around Rs 55,000 crore.

That comes up to around $7.5 billion, and that would be the all-in cost for two billion vaccines. And remember, 5 per cent of that cost goes back as the goods and services tax (GST) revenue.

For comparison, the combined “Operation Warp Speed” cost alone, as reported in the US Congress data, adds up to over $18 billion, and that was just the first phase of orders a year ago. Total US spending at this point for about a billion doses in cumulative orders is around $30 billion. The EU data is not much different. Western spending to date has been an order of magnitude more than India.

Our gross spending to date would pay for perhaps 300 million Pfizer vaccine doses at their current prices. Let’s be enormously charitable (or rather hope someone else will be) and make that 500 million. That’s still a quarter of the doses domestically ordered. The drama around the lack of orders and Pfizer was pointless noise, as documented here months ago.

In the past six months alone, India has completed 1.15 billion vaccinations — 200 million more vaccinations than Europe and North America combined, whose collective population matches that of India. At the existing differential rate of vaccinations, India would surpass them in cumulative vaccinations completed within the next quarter.

In the past three months, India alone accounts for close to a quarter of global vaccinations and exceeds the combined high-income world (Europe, North America, developed Asia/Oceania, whose combined population much exceeds India’s) by a large margin.

Europe hits four million doses per day on some occasions. Divide the total Indian doses by 365 and you get roughly 4.3 million. India averages that much — equal to the eligible population of New Zealand — every day across an entire year.

Not The Old India

Aggressive vaccine development at par with the West, with far more resources.

A production scale-up that competes with China’s, with arguably better vaccines, given that China is now frantically going through a second round of boosters based on the little information available.

A national infrastructure that drives three to four million doses on national holidays and six to seven million per day on public holidays. Every aspect of the process — design, procurement, and deployment — arguably among the best in the world.

This author recently pointed out how the Covid-19 vaccination demonstrated success at executive delivery in a manner uncharacteristic of prior administrations. Ideas and plans are great, but what good are they unless you demonstrate the might of your capability to harness resources to get something done? In this case, India has set a benchmark on par with or better than the developed world.

In fact, Serum Institute of India has, for years, been one of the world’s greatest contributors to vaccine coverage. India had one of the world’s biggest public health infrastructure with 28,000 vaccine cold-storage facilities. Yet, it took Mission Indradhanush, launched in November 2014, to get Indian domestic vaccination coverage over 90 per cent by 2020.

This was India’s lot once — incrementally developing a whole lot of capabilities but essentially incompetent at large-scale execution. One of the world’s largest cold chains and the best-known vaccine maker in the world, but it took the current administration to get general vaccination coverage into acceptable range.

It is no surprise that the same administration was up to the Manhattan Project-level task of vaccinating India against Covid-19.

Naysayers may step in with the ‘but, but’ arguments, but every one of those arguments will be an effort to make you debate against yourself, not against the benchmark of a superior effort from the past.

The reality is that there’s nothing from India’s past to benchmark against what has been accomplished in the past year in every barometer — speed, cost, or scale — not even close. Our past record in public health is, at best, embarrassing and generally appalling.

What the past year does is restate a picture of what India does in the face of a global challenge, when one takes a stereotypical view of the world — it works at the scale and speed of China, with the effectiveness of the West, and the independent capability of Japan, yet at a price level that India alone can manage.