The Double Life Of CV Raman 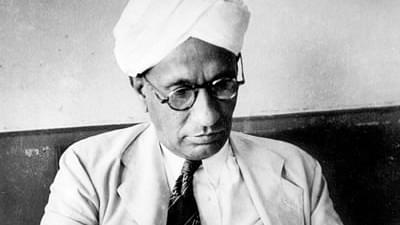 The young assistant accountant general of Calcutta, a Madrasi in his late teens with his newly married wife, was leading a double life in the strange city. Every day at 5 pm, as the government office closed, the young man switched into a new persona and went mysterious till 9:30 or 10 pm and then returned home. Next morning, as early as 5:45 am, he would assume the mysterious persona until 9:45 am and then would become ‘normal’ - a financial bureaucratic clog in the machine of the Empire. The young man was none other than C V Raman - Asia's first Nobel laureate in physical science.

For almost one decade between 1907 to 1917, Raman worked as a financial bureaucrat while spending all his other time doing scientific research in an organisation founded by Mahendra Lal Sircar (the physician who treated Sri Ramakrishna) called ‘Indian Association for the Cultivation of Science’ (IACS). In a way, this aspect of Raman reflected the life of another genius of physics - Albert Einstein, who worked as a clerk in a patents office while contemplating and solving the most profound mysteries of space and time. And like Einstein, Raman, too, was a music enthusiast. But Raman’s love in music went beyond the aesthetics and explored the physics of musical instruments and the music they produced. Physicist and science educator G Venkatraman in his excellent book Raman and His Effect (Universities Press, 1995) has explained this aspect of Raman lucidly. Some of the following paragraphs are based on his book.

Lord Rayleigh, a great physicist, had conducted an experiment with a tuning fork of frequency 256 Hz and was excited when he mounted it upon a resonance box of frequency 521 Hz. In such a system, the box should not resonate but actually it did. C V Raman tried to create systems similar to one discovered by Rayleigh. He created one such with a weighted wire in tension attached to a board stretched to a frame. When the wire was plucked the board vibrated double the frequency of the wire. Later, to his surprise, he discovered this interesting principle being used in a very common Indian string instrument which the wandering sadhus carry - the ektara.

Strange as it may seem, there is in actual use in India, a musical instrument, rather a crude one, it is true, the working arrangements of which are in essentials, the same. It is styled the gopijantra or ektara (literally meaning single string) and is chiefly used, I find, by vocalists - those of the poorer sort- for striking key notes and marking time. The users of the instrument are apparently totally unaware of its usual characteristics.

Raman also studied exhaustively the physics of the music of violin which eventually became a book in itself : On the Mechanical Theory of Vibrations of Musical Instruments of the Violin Family with Experimental Verification of the Results, Part-I. Raman also constructed a mechanical violin. In his study of violin, he discovered the relation between frequency response of the violin and its quality. Frequency response curve is obtained by plotting bowing pressure in the y-axis and the frequency in the x-axis. Frequency response curve of a violin is now called ‘Raman Curve’.

Though Raman did study both the Indic classic string instruments - veena and tambura, he did not make an elaborate study of them as he did with the violin. Nevertheless, he noted that the bridge in these two instruments is rounded and not sharp as in Western musical instruments and that this contributed to the tonal richness and melodious notes of the Indian instruments. Raman's study on Indian percussion instruments, mridangam and tabla, led him to marvel at the 'remarkable appreciation of acoustical principles' by ancient Hindus. Comparing them to percussion instruments of the West, Raman wrote:

All the instruments of percussion known to European science are essentially nonmusical and can only be tolerated in open air music or in large orchestras where a little noise more or less makes no difference. Indian musical instruments of percussion stand in an entirely different category. Times without number we have heard best singers or performers on the flute or violin accompanied by the well-known indigenous musical drums, and the effect with a good instrument is always excellent.

Emphasis not in the original

Raman set out to find out the physics of mridangam through a series of experiments in 1919. However, later, his research changed from the physics of music to optics and the Raman effect would soon explain the blue of the sky. Yet, the physicist would return back to his passion and in a paper published in 1935 in the 'Proceeding of Indian Academy of Sciences' he explored the ‘Indian musical drums’. Here is an excerpt that shows how as a physicist he viewed the musical instruments.

The most striking feature which distinguishes the Mridanga and the Thabla from other forms of drum is the sustained character of the tones. This is evidently the result of two features in the construction, namely, the heavy wooden shell on which the drum-head is stretched and the symmetrical loading of the latter by a firmly adherent composition. A drum-head which is stretched on a frame of small mass is obviously incapable of prolonged vibration, owing to the rapid communication of movement to the supporting frame. The heavy rigid shell in the Mridanga or Thabla, on the other hand, is favourable to the sustained vibration of the drum-head. The loading of the drum-head greatly increases the energy of vibration and is therefore a factor which favours the emission of a sustained tone. The presence of the enclosed air within the shell is probably also a factor tending in the same direction.

The love for music when a physicist has it, deepens the understanding of aesthetics of music at various levels.

However, it is not only the love for music that made C V Raman stand apart. His love for science as ‘entirely and essentially a human phenomenon’ also made him see beyond the farce of Nehruvian scientific temper, showed him the necessity to reach out to the individual and keep out the government state-ism of the Soviet kind. His criticism of the Council of Scientific and Industrial Research (CSIR) turned out to be prophetic. The socialist bureaucratic machinery that runs CSIR turned it into what Raman called the Taj Mahal only to bury science.

Soon after independence, Raman was one of a very few who had realised that a Nehruvian caricature of a Soviet Stalinist state would bade ill for India. When the Indian Express asked him for an independence day message in 1952, he said:

Looking around and sizing the situation, it seems to me that the real danger before our country is crushing down of individual freedom and initiative by the steamroller of government authority. Already we see indications of this in the ... legislative measures having an expropriatory character and the passage of taxation and other bills calculated to kill private enterprise in the field of industrial development. ... Democracy without freedom for the individual is a shame and a delusion.

CV Raman rightly had nothing but disdain for the substance-less state-run techno-centric scientism of Nehru. Uma Parameswaran, in her well researched biography of Raman, shows how he resolutely rejected the patronising plots of Nehru pointing out that the first Prime Minister was flawed in principle in his approach to science:

Nehru was certainly instrumental in awarding Raman the National Professorship and the Bharat Ratna. But by now, Raman was of the firm opinion that the government policies being pursued would not benefit scientific progress but merely build facades run by the bureaucracy. ... Soon the national laboratories became what the Indian Institute of Science had been before Raman shook it up - a place where sinecure scientists did little by way of innovation or discovery. This riled Raman no end. He held Nehru responsible. He felt Nehru had allowed Indian science to be hijacked by self-serving people who were given control of policy making. ... Raman faulted Nehru for not having the knowledge, the intuition, what you will, to find the right people for the advancement of Indian scence. ... On one of Nehru’s visits, Raman gave him a tour of the Raman Institute and also a lecture on the need for an endowment of one million rupees so that the research base could expand. But Nehru would not commit himself and said insread ‘Raman why do you worry about the future of your institute?’ Raman shot back, ‘I certainly don’t want this institute to become another government laboratory.’

Raman’s disapproval for Nehru’s view on science was so great that his grandson Sekhar witnessed in 1955, Raman ‘picking up a bust of Nehru that stood on the shelf and hurling to the ground’, breaking it into pieces. He also had smashed with a hammer the Bharat Ratna given to him by Nehru government. When in the mid-1960s, an All India Radio official asked him about the role of Nehru in the development of science in India, he answered half-joking and half-seriously ‘What? Do you want to lose your job? If you air what I have to say, you will surely be fired.’

Indian science has thus two ways to follow: one, the empty socialist rhetoric of scientific temper, the path fabricated by dynasty socialists or a system that will reward and respect innovative thinking, individual freedom and hard work - the vision that C V Raman gave us.