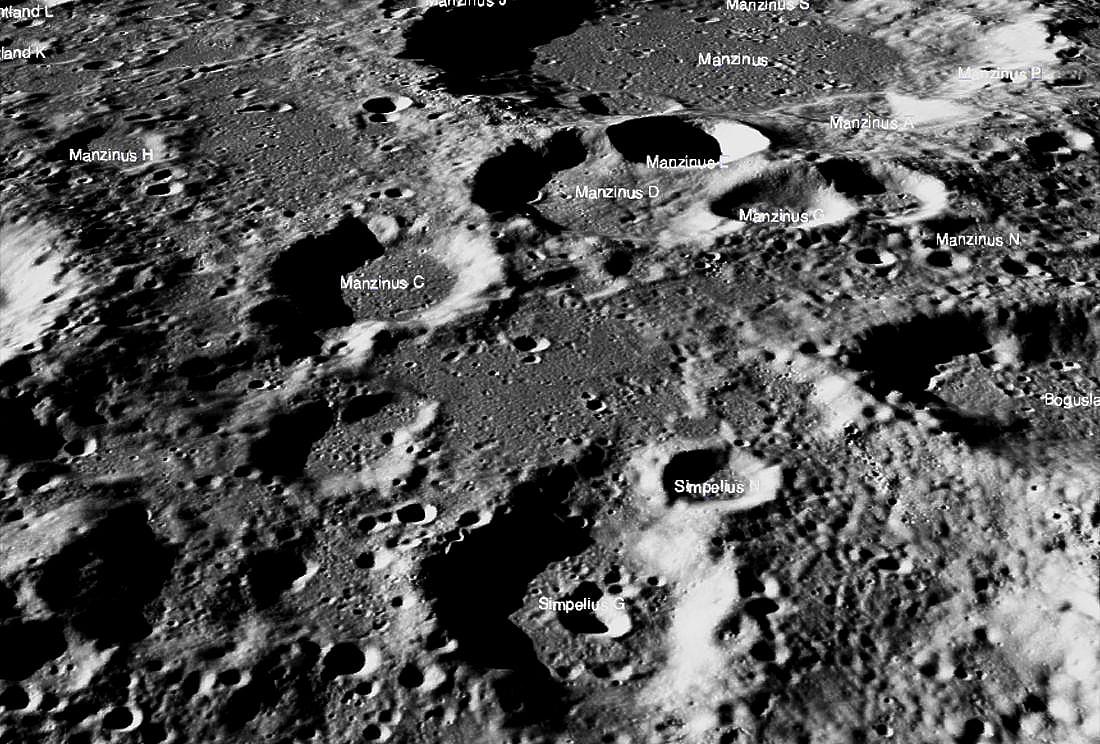 The scene above was captured from an LROC Quickmap fly-around of the site, image width is about 150 kilometers across the center. (NASA/GSFC/Arizona State University).

On 17 September, NASA’s Lunar Reconnaissance Orbiter (LRO) photographed during its flyby over the Moon’s south pole the site where Chandrayaan-2’s Vikram lander had hard-landed in the early hours of 7 September.

However, in the pictures of the landing site that LRO managed to take, NASA scientists have failed to locate the Vikram lander.

LRO’s flyover came just days after Chandrayaan-2’s Orbiter had spotted the Lander 500 meters away from its designated landing site. The Lander had hit the lunar surface at a much higher velocity than it should have and is not in the orientation that it was supposed to be, making communication difficult.

But ISRO has not released any images of the landing site taken by the Orbiter. There is no clarity on the state in which the Lander is — whether it has disintegrated due to the high-velocity impact with the lunar surface or not. There are many more questions, like those regarding its orientation on the lunar surface, that continue to remain unanswered.

This is what made LRO’s flyby important.

“Per NASA policy, all LRO data are publicly available,” Noah Petro, LRO’s project scientist at NASA’s Goddard Space Flight Center, had said, adding, “NASA will share any before and after flyover imagery of the area”.

Following through, NASA has released the pictures taken by its lunar orbiter. But, adding to the disappointment over the loss of communication, the Vikram lander has not been spotted in these pictures.

LRO’s job was tough. At Vikram’s landing site, the end of the lunar day, which is equivalent to 14 earth-days, was just three days away. This means that, at the landing site, the Sun is low on the horizon and it is near dusk in the region.

Moreover, near the lunar south pole, where Vikram has landed (around ~71° south of the lunar equator), the Sun does not rise higher than ~19° in the sky. (Sunlight strikes at low angles in these regions of the moon, only skimming the rims of craters in most cases and leaving the deep interiors cold in shadow.)

(Read: Why ISRO Attempted A Landing Near Moon’s South Pole)

These conditions must have created long shadows on the surface, covering the Lander. As a result, LRO failed to capture the details it could have otherwise.

In a report on 17 September, New-York based Aviation Week Network confirmed that the “long shadows in the area may be obscuring the silent lunar explorer,” adding, “ Vikram may not be in the LRO’s field of view.”

Now, NASA has also confirmed that LRO flew over the site “when the local lunar time was near dusk; large shadows covered much of the area”.

The shadows are visible in this large mosaic (centered on the targeted landing coordinates; high-resolution version here) captured on 17 September.

For comparison, here’s a picture of the site acquired before the landing.

“Perhaps the Vikram lander is hiding in a shadow,” NASA has said.

LRO will have more opportunities to photograph the Vikram lander, but only after the end of the lunar night. The lunar night, equivalent to 14 earth days, will kick-in when the lunar day ends in the next 72 to 96 hours.

Since the Israeli Beresheet lander crashed earlier this year, LRO has been searching for NASA’s Retroreflector that it was carrying. The Vikram lander also carried NASA’s Laser Retroreflector Array, a passive instrument for the precise measurement of the distance between the Earth and the Moon.

The Laser Retroreflector is expected to have survived the hard landing and NASA will continue to search for it after the end of the lunar night.

NASA has said that LRO is scheduled to fly over the Chandrayaan-2 landing site on 14 October. Lighting conditions will be more favorable around that time.

The LRO, launched by NASA in 2009, has been orbiting the Moon for a decade now. It carries a system of three high-resolution cameras, two of which are narrow-angle cameras providing images with 50 cm (19.7 inch) resolution.

For the record, Chandrayaan-2 carries a camera with a resolution of 32 cm (12.6 inches) — better than LRO and other lunar orbiter missions to date. It can, therefore, capture much more details of the landing site than LRO.

But again, ISRO has not released the images that the Orbiter has captured, nor have they described what those images show.

Over the years, LRO has captured high-resolution images of the Moon for various applications, including those of the Apollo landing sites. Most recently, it had captured images of China’s Chang’e 3 and Chang’e 4 landers on the Moon’s surface, and located the Beresheet lander earlier this year.