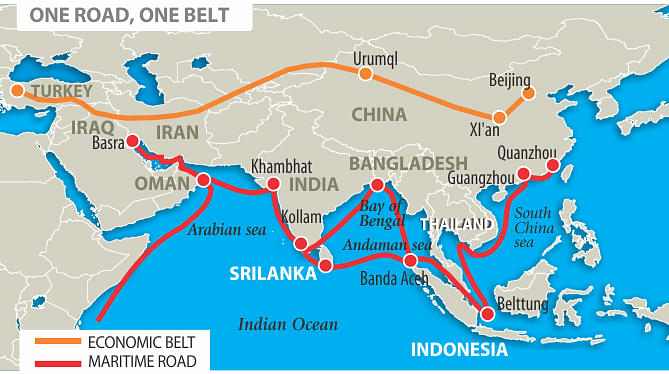 What is this latest ambitious Chinese infrastructure project and why should we be cautiously optimistic about the same.

One Belt One Road (OBOR) is an initiative the Chinese envisioned in 2013 and are taking progressive steps to bring it to fruition. Execution of the plan will depend on how China is able to engage the countries involved in this perimeter, mainly in what it calls the Silk Road Initiatives. The OBOR has following two key components:

OBOR’s grand vision seems to cover every continent except the Americas. It is aimed at further strengthening the Chinese role in economic integration with these nations and playing a larger role in global political affairs. As and when the infrastructure is ready, the Chinese are not only looking to push its indigenous technologies but also find means to export its surplus manufacturing.

As per the Chinese, OBOR initiative is in line with purposes and principles of UN Charter and is not restricted to the ancient Silk Route but open to other countries for wider benefits for all involved. President Xi Jinping and Premier Li Keqiang have visited more than few dozen countries promoting OBOR, and throwing their weight behind by bringing domestic ministries together to facilitate the project, providing policy support and funding billions of dollars to partner countries, such as $1.4 Billion funding to Sri Lanka to build Colombo Port City.

The strategy is long term and seems to have been in motion for not years, but decades. The Chinese have invested in several African countries over decades, and these countries are now expected to be part of its Maritime Silk Road. On other hand, many of the Asian countries that are going to be connected through New Silk Road Economic Belt are already part of Asian Infrastructure Investment Bank (AIIB) — another Chinese initiative, to invest in infrastructure in these countries. AIIB already has 56 member countries as signatories.

China’s economic power allows it to play it king size on the geopolitical game board. Recently, the Chinese have committed $40 Billion to Silk Road Fund that will go towards creating infrastructure in Asia for above projects, and building ties with the countries involved. Chinese have proven their capability with mega infrastructure projects before, the freight train connectivity to Spain or looking to build a tunnel system under the Mount Everest are a few examples. China also signed its first everMoU with Hungary last month around OBOR. Hungary could become an integral logistics hub in Europe and Hungary-Siberia rail network is an opportunity for both countries in near future.

What’s in it for India?

China extended an invitation to India to join Maritime Silk Route during the 17th round of border talks between the Special Representatives of the two countries in New Delhi.

OBOR project will have a connected mix of not only developed European countries but also the bustling East Asian nations. India needs to be careful how China progresses on this. China-Pakistan Economic Corridor as well as the Bangladesh-China-India-Myanmar Economic Corridor is also closely related to this Initiative. Besides economic integration, these initiatives are also meant to showcase Chinese military might to the larger world and how it plans to use these sensitive corridors for its military mobilization. The buildup of roads, highways, ports, tunnels and bridges over such a large unchartered terrain across all these countries will have a tacit approval from each one, who owns that particular stretch of land, air space or sea. One has to be thoughtful about an unseen future before falling into what could possibly be a trap.

Once all key players have undergone their own validation to become participants, these initiative led by the Chinese could augur well for the rising Asian century. The economic prosperity that the ancient Silk Route brought to the regions sitting on its path could well be repeated in a much more impactful manner. The Indian government is progressive and looking to connect internally with initiatives such as Digital India, and it can marry gracefully with “Information Silk Route” where telecom connectivity between the countries through fiber, trunk line and under-sea cables is also a key component. This will expand the bandwidth capabilities for India significantly, without which offering eGovernance and delivering public services in an efficient manner will remain a pipe dream and a good marketing campaign.

Being a key participant to such a global infrastructural initiative would mean we will have excellent connectivity of various transport modes, and a great facilitator to Make In India initiative. Success for us depends on how we efficiently use these channels to find and grow new export markets for our products and enable efficient trade routes. The benefits to India while participating in a globally challenging project such as OBOR are immense. For one, the technical know-how they will bring back could be used to develop or iron out issues facing domestic infrastructure sector or for envisioning projects that we never had audacity to pursue before. An increased trust between the countries involved will not only increase opportunities for extended trade across their respective industries, but sharing the know-how, co-operating in research & development and improving mutual security through co-operation in areas such as customs, are just a beginning of immense possibilities.

Hemant is a technology professional. Also a first response team member for an International disaster organization. Interests are diverse but likes to follow &amp; write on International Relations. Twitter handle is @HemantChandak
Get Swarajya in your inbox everyday. Subscribe here.
Tags: