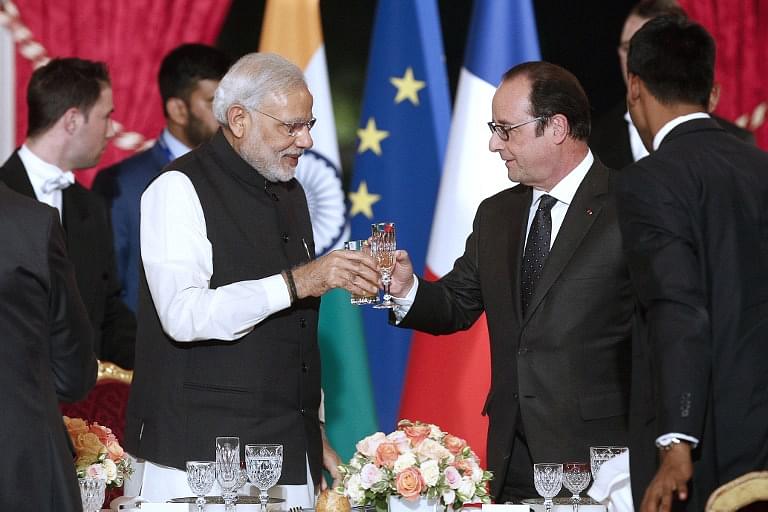 There are valid concerns regarding the direct purchase of 36 Rafale aircrafts from France. But, the deal was crucial in the context of the pressing needs of the Indian Air Force.

Amidst rumours that there might be some movement on the Rafale deal during Prime Minister Narendra Modi’s visit to France, India unexpectedly announced that it would purchase 36 of Dassault’s Rafale aircraft off the shelf for expedited delivery. This purchase would be in addition to the 126 similar jets India has been negotiating to acquire since 2012 from the same company through a tender floated in April 2007 for Medium-range Multi-Role Combat Aircraft.

The news comes as a surprise because the possibility of an extra-contractual emergency purchase was never imagined by defence analysts – attention had been focused on the technical issues that have kept India and France apart in the negotiations for so long and pessimists opined that the technical nature of the disagreements would preclude any breakthrough unlike the nuclear liability issue with the United States in January 2015 which was political in nature. In a town like Delhi, it is astounding that there was not even the slightest hint of a leak about the government’s decision. The 36 jets would equip two squadrons of the Indian Air Force.

Interestingly, neither the Indo-French joint statement nor any information released since makes any mention of the negotiations for the 126 jets that are ongoing. This has set tongues wagging in India as to the implications of such a purchase on a wide variety of issues such as the development of Indian manufacturing, the fate of India’s defence procurements processes, and, of course, the MMRCA contract itself. On the surface of it, there appears to be little impact intended – the acquisition was motivated purely by the “critical operational necessity” of the IAF and is a one-off special dispensation. As Air Chief Marshal Arup Saha said at Aero India in February, “It is important we have an MMRCA. I would not say Rafale, but we need to have it [MMRCA] in the quickest possible time.”

The need is clear – against a sanctioned strength of 42 squadrons, the IAF is presently operating with barely 25 squadrons. Moreover, 14 of these squadrons are comprised of MiG-21s and MiG-27s which are scheduled for retirement between 2015 and 2024. With India’s Fifth Generation Fighter Aircraft joint venture with Russia held in abeyance, it might be time for some constructive panic in Vayu Bhawan. The order for 272 Sukhoi-30MKIs from Russia – 230 in 2002 and 42 in 2012 – will provide 13 squadrons by then but that still leaves operation strength at 24 squadrons. However, even these have recently been plagued with troubles and India grounded its entire Sukhoi fleet for a time. With seven to nine Rafale squadrons and 14 squadrons of the indigenous Tejas LCA – orders for the Tejas are yet to be placed – the IAF may finally be at full strength by 2030. Defence hawks will have to wait for while before India is in a position to further raise the number of sanctioned squadrons.

What impact will India’s rush purchase have on the MMRCA negotiations? One might argue that the possession of 36 Rafales by the IAF will strengthen Dassault’s bargaining position. If India does not dilute its position, Delhi may well be left with yet another plane in its air force that only compounds the logistics of spares and ammunition without any indigenisation. This is an extreme view – unless the Indian terms are outrageous, it would be financially as well as politically myopic of Dassault to walk away from a $20 billion order. There may be plenty of arguments against (and for) the Rafale aircraft itself but those have little bearing on the purchase of 36 additional jets and would pertain to the entire MMRCA venture.

Another concern is that the purchase of 36 Rafale aircraft in parallel yet isolation from the MMRCA negotiations might undermine the Cost Negotiation Committee. However, it is difficult to see how that might be the case. The primary factor in the ballooning of costs has been India’s insistence on indigenisation – Dassault argues that India does not have the prerequisite industrial infrastructure to manufacture jets like the Rafale and to allow Hindustan Aeronautics Limited to do so would require certain upgrades and expansion in capability. The development of this infrastructure will add to the cost of India’s MMRCA project. Yet this will have little bearing over jets manufactured entirely in France and delivered to the Indian Air Force. Furthermore, the terms India has asked for and been granted are “better than conveyed by Dassault Aviation as part of a separate process underway.”

There is a valid concern that such purchases would undermine Indian defence procurement procedures. Foreign companies will not take contract negotiations seriously if they feel that it is possible to circumvent Delhi’s stringent demands by dragging on discussions indefinitely. This may make sense in retrospect but is dangerous as a corporate policy. During the negotiations of the MMRCA contract, it has been suggested several times that the exercise be abandoned or that a rival aircraft manufacturer be courted. While it worked out well for Dassault this time, India could have just as easily abandoned talks and gone for a different aircraft. There are problems with India’s defence procurement process, no doubt, and they certainly cast grave doubts over the country’s bureaucracy and planning. These problems exist whether the 36 additional aircraft were purchased or not and to feign affront over the compromising of India’s acquisitions process now is disingenuous at best.

The parallel purchase of 36 Rafales may rub many people the wrong way. Nonetheless, it is important to contextualise the decision in light of the IAF’s urgent operational needs. Given the troubles with the Sukhoi-30MKI and the FGFA project, the fastest possible acquisition was the Rafales from France – any consideration of the Eurofighter or any other jet would have merely started another clock on familiarisation and negotiations between India and the new manufacturer. All in all, this one-time purchase gives the IAF some breathing room until its other acquisitions come in.