Don't Miss The Forest For The Trees: Abe's Visit Was About More Than Just Bullet Train 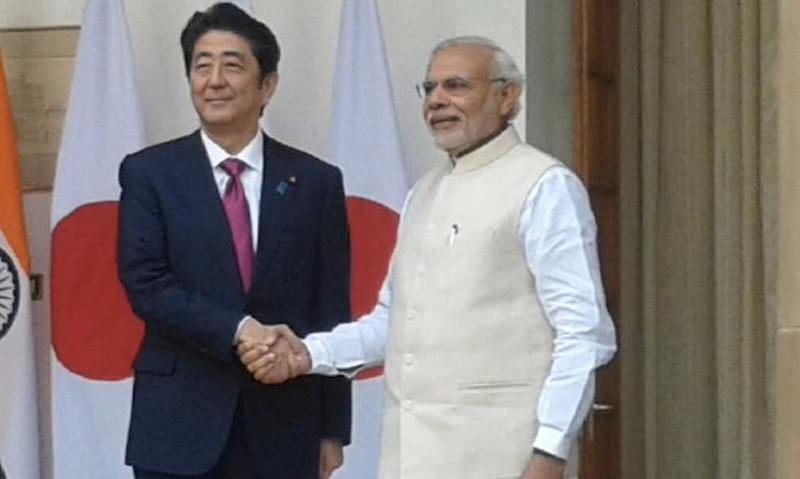 By forging strategic pacts ranging from maritime security and defence purchases to counter-terrorism, India and Japan have tried to balance the security equation in Asia. Those focussing just on the bullet train project are missing the wood for the trees.

The MoU on civilian nuclear cooperation and the bullet train agreement grabbed the headlines during the recently concluded visit (11-13 December) of Japanese Prime Minister Shinzo Abe to India. But equally important is the security cooperation forged by Prime Minister Narendra Modi and Abe to make the India-Japan relationship a key element of Asia’s new geopolitical order.

For a relationship that has blossomed only in the last decade – after the 2006 India-U.S. nuclear deal – the current contours of the India-Japan security engagement are wide. They range from maritime security (concerns over the South China Sea territorial dispute and joint exercises) and defence purchases (potential aircraft sale to India) to counter-terrorism (Islamic State and radical extremism). This has been aided in no small part by the United States’ active diplomacy, which perceives New Delhi and Tokyo as important partners for its ‘Rebalancing to Asia’ strategy. Washington has encouraged these two reticent Asian democracies to engage bilaterally and also trilaterally in the form of the U.S.-India-Japan [1] and the India-Japan-Australia [2] dialogues to cooperate on regional security matters. These engagements have been enhanced by PM Abe’s effort to restore Japan’s position as a “normal” country by receding from its pacifist constitutional orientation.

The India-Japan security engagement reflects these strong external strands. But these most prominently converge with India’s own security concerns in the maritime security sphere. For the last two years, India has viewed with alarm the People’s Liberation Army’s (PLA) aggressive tactics on the Line of Actual Control in the Himalayas, the growing Chinese presence in the Pakistan-occupied Kashmir and Gilgit Baltistan – Indian territories under Pakistan’s illegal occupation – and the rising profile of the PLA Navy in the South China Sea with adverse implications for India’s Indian Ocean Region (IOR) positioning.

An early recognition of the problem has brought the Indian Navy (IN) into regular interaction with the Japan Maritime Self-Defense Force (JMSDF) through the Japan-India Maritime Exercise, held annually since 2012. This has helped the two navies achieve some degree of mutual familiarity. This year, the JMSDF participated as a permanent member in the Malabar exercises of 2015, which was so far a India-U.S. bilateral naval exercise. A key component of this year’s exercise was anti-submarine warfare. Understandably China was rankled, since it relies on its submarine fleet to penetrate the IOR.[6]

PM Abe is eager for Japan’s military exports to contribute to its domestic defence industrial base and cement geopolitical relationships. In April 2014, Japan had eased restrictions on arms exports [7] and since then, Tokyo has been busy hunting for overseas military hardware contracts, including bidding for Australia’s ambitious submarine upgrade programme. [8]

Among the contracts is one for the IN: the purchase of at least a dozen ShinMaywa US-2 amphibious aircraft [9], useful for Search-and-Rescue operations on the high seas and to guard the island territories, particularly the Andaman and Nicobar islands – our first line of defence in the Indian Ocean.

India and Japan have held multiple talks for this aircraft sale. One of the key obstacles – India is not a member of the Wassenaar Arrangement, [10] a multilateral export control regime governing transfers of conventional arms and dual-use goods and technologies such as the US-2 aircraft. To overcome this, two agreements were signed during PM Abe’s visit – ‘Agreement concerning the Transfer of the Defence Equipment and Technology’ and the ‘Agreement concerning Security Measures for the Protection of Classified Military Information’, to help facilitate the sale from the Japanese side.

An even larger impediment to the purchase is the high cost of the aircraft – reportedly 11 billion Japanese Yen per unit, much higher than a similar spec-ced competing aircraft such as Bombardier CL-415. [11] To reduce costs, India is looking to locally produce the plane by involving a private Indian defence manufacturer under the ‘Make in India campaign’. Both countries are treating this as a Government-to-Government agreement to escape India’s cumbersome defence procurement procedure. But New Delhi will still have to sort out thorny issues related to the offsets and the amount of the contract value required to be invested back domestically and how.

There’s a lot at stake, and India and Japan will surely conclude this big-ticket deal soon. But there is a need to look beyond a single deal, to the broader bilateral defence business of both countries. It may be wiser to look at the purchase or manufacture of smaller equipment and components such as image sensors, batteries and carbon-fiber aircraft components, which are not only dual-use but will be particularly useful for India’s own weapons development efforts.

An additional common concern for Japan and India is terrorism. Japan became the latest victim of the Islamic State’s (IS) violence when IS beheaded two of its nationals- a security consultant and a journalist- earlier this year.[12] Though Japan participated in the U.S.-led Iraq war effort through a humanitarian contingent, this violence is a new challenge for Japan. India is more experienced in this sphere, and therefore a good counter-terrorism partner for Japan. New Delhi has now offered training and related support to Tokyo’s newly-established terrorism focused intelligence collection unit.[13] A next step can be intelligence-sharing on the critical issue of terrorist financing.

This natural convergence of strategic interests notwithstanding, India has taken a nuanced approach towards its engagement with Japan.

Certainly China’s growing military assertiveness and the China-Pakistan relationship have been catalysts for strengthening the India-Japan bilateral. Yet PM Modi also realises China’s critical importance for India’s financial and infrastructural needs, not to mention the BRICS (Brazil, Russia, India, China and South Africa) grouping. An amicable relationship with China is a pre-requisite for India’s ‘Act East’ policy. The Indian establishment is aware that many western analysts posit the India-Japan relationship as an alliance against China. But India is careful to balance its security concerns vis-à-vis China and ensure that it does not become a pawn in American geopolitical ambitions. An added sensitivity is to East Asia: PM Abe’s attempts to hark back to Japan’s ‘glorious’ past have proved contentious not only domestically but also regionally in those parts of East Asia which experienced the war crimes of  Japan’s Imperial Forces during World War II.

India, under PM Modi, has been remarkably candid about China and certainly envisages a central role for itself along with Japan in the emerging Asian security architecture. However, it also realises that only by maintaining a strategic autonomy in its foreign policy, can a stable Asian balance-of-power be promoted.

This piece was first published in Gateway House and has been republished here with permission. ‘Gateway House: Indian Council on Global Relations’ is a Mumbai-based foreign policy think-tank established in 2009.

[4] Ministry of External Affairs, Government of India, Joint Statement on the State Visit of Prime Minister of the Socialist Republic of Vietnam to India, 27-28 October 2014.

[5] Ministry of External Affairs, Government of India, Joint Statement on India and Japan Vision 2025: Special Strategic and Global Partnership Working Together for Peace and Prosperity of the Indo-Pacific Region and the World, 12 December, 2015.

[7] Ministry of Defense, Government of Japan, ‘Three Principles on Transfer of Defense Equipment and Technology’, 1 April 2014.