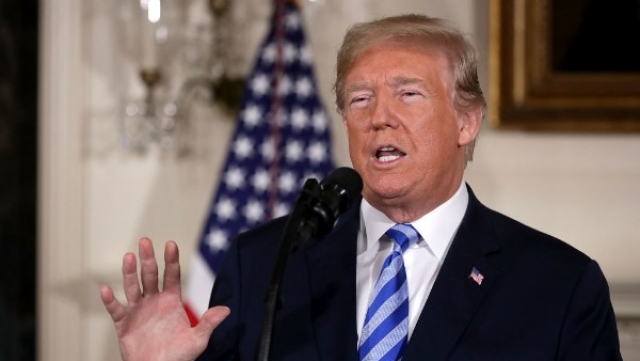 When President Trump announced the US withdrawal from the Joint Comprehensive Plan of Action (JCPOA), also known as the Iran Nuclear Deal, on 8 May 2018, his intent was that Iran could be starved and coerced into a new deal.

Such an arrangement would force curbs on Iran’s ballistic missile programme and prevent its forces operating beyond its boundaries for any domination and influencing operations in the Middle East. War, perhaps, was not in his mind, although the US is said to have drawn up several options of maximum coercion.

War may still not be on his mind, although National Security Adviser (NSA) John Bolton seems hell bent on it. For the first time, we are seeing events hurtle at a pace faster than can be analysed. There is geopolitics, which is Middle East-specific, and also those that go beyond, which are driving all this.

For starters, it is Trump’s perception that the JCPOA was an inappropriate agreement. He made this evident during the presidential campaign and took his time in implementing a US pull-out from the agreement a good 16 months later.

Now, time is not on his side and in less than a year, he may be hitting the campaign trail again and must have something to show as the boldest of his overseas strategic steps. Someone is surely telling him that abdicating the Middle East by moving US troops out of Syria is going to open up vast new spaces for both the Russians and Iran’s Islamic Revolutionary Guard Corps (IRGC), the arm for foreign operations.

With Benjamin Netanyahu back in power in Israel, and the young leadership of Saudi Arabia and the UAE in tow, yielding space to Iran is taboo. Trump’s projected withdrawal from Afghanistan isn’t working well either, with the Taliban aware of its own strengths. So, the avowed US desire to rebalance the Indo-Pacific to limit China in conjunction with all that Trump is doing on the trade front with the Chinese, is receiving a setback; that is exactly how it happened with former President Barack Obama too.

He finally conceded, and the JCPOA was signed. It was pragmatism and, perhaps from there, if Obama had more time, it could have been taken to another level with economic sops in return for less causticity towards Israel and the Gulf states. Trump effectively stopped that.

What is evident is that the US administration is a house divided. A hawk himself, former Defence Secretary James (Mad Dog) Mattis advised against any military misadventure against Iran. He knew the limits of today’s conventional operations and also how effectively weaker nations can adopt hybrid war to contest stronger ones.

His advice spurned, it is essentially John Bolton with imagined threats and Secretary of State Mike Pompeo who are calling the shots. With a light weight and militarily inexperienced Defence Secretary in Patrick Shanahan, Team Trump’s ability to undertake the full act of active coercion is highly suspect.

It is not certain that the US armed forces are in sync with the views of the trio either.

It’s not even certain whether Israel actually views the Iranian threat as acidic as is made out to be. Nations use projection as part of information and influence operations to obtain geopolitical support from partners. The projected quantum of missiles that it alleges as being part of the Iranian arsenal on Lebanese and Syrian territory has never been confirmed by independent sources.

Referring to the unofficial demands made by Mike Pompeo, the high profile US strategic affairs magazine, Foreign Affairs states – “The demands include ceasing all uranium enrichment, ending the proliferation of ballistic missiles, releasing dual nationals held in Iranian prisons, and cutting off support for Iranian proxy groups throughout the Middle East”.

These could be eventual objectives but remain unrealistic initial demands to negotiate upon. The more Iran is badgered, the greater will be its resistance. Perhaps, the US sub- leadership looking at all this does not cater for the core characteristics of the potential adversary. Shia history is replete with examples of sacrifice, something which is second nature to the sect and in which it revels.

Pressure may bring out the worst in it. Four years ago, a couple of thousand Indian Shias were willing to travel to Iraq to protect the shrines at Karbala and Najaf that the sect reveres. Shias from around the world will probably line up to go to Iran to fight on its behalf. Besides that, there can be no guarantee that the regime change the US seeks will not lead to a situation where a powerful military entity such as the IRGC comes to power and sets the course for a further bout of confrontation.

Experts agree that President Trump’s views may not be reflected by the statements of his Secretary of State or NSA. He wants effect, while the other two want confrontation. For greater effect, Trump should have left a window open to at least one or two Europeans among the P5+1 to maintain a line of negotiation, but he cut himself away completely.

However, all is not lost because even the 60-day period given by Iran to the remaining big powers to work out a solution to counter US sanctions is not a sacrosanct one. This way, something better can be negotiated to ward off the dogs of war.

The truth about war is that if Iran is to be the loser, it won’t let anyone else be the winner. Victory and defeat in modern-day hybrid war is not something definable in time, space or destruction. Iran has enough capability to create mayhem in the Gulf, something the GCC nations need to be fully sensitive to.

The Eldorado created in the kingdoms is vulnerable. At the first signs of trouble affecting them, lots of money is going to leave their shores, followed by manpower; the so-called diaspora. Iran has enough proxies in the area and if the professionalism displayed by Quds Force Commander Qasem Suleimani is an example, then it would have catered for all piquant situations to take the battle to the other side.

Forcing commitment of its adversary’s ground forces to fourth- generation warfare battles with irregulars in territories outside Iran will be part of the IRGC strategy. It’s not going to be a cakewalk that John Boulton and Mike Pompeo may be imagining. The US has a repertoire of strategic talent who will advise better, provided there is someone willing to listen.

Economically, war will be a disaster for the world, and maybe even worse for India. The Indian economy is one of those yet surviving international pressures but that is on the basis of energy prices lower than USD 75 per barrel. The first shot fired in the Gulf and strains of closure of Hormuz will send oil to 150 USD per barrel.

Loss of confidence of the diaspora could lead to annual losses of remittances worth 35-40 billion USD, besides the expenditure required for mass scale repatriation. The sky rocketing price of energy will have a major effect on China, which too imports 80 per cent of its needs. A Chinese economy in free fall will shake the world’s economy.

The problem is that there is no balancing element against US ambitions. The absence of tall Arab leaders and the lack of confidence between Trump and European leaders such as French President Emmanuel Macron, is taking the world to a path from which recovery will become very challenging. Perhaps, the US strategic community has a greater role to play in advising a pull back from any intended course of action which is going to lead to war or near war.