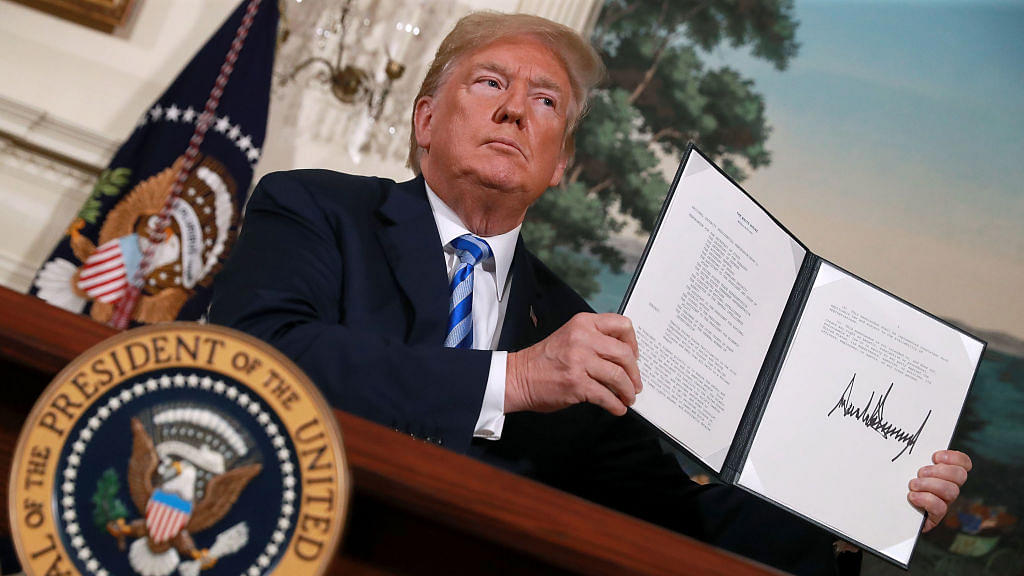 US President Donald Trump holds up a memorandum that reinstates sanctions on Iran after he announced his decision to withdraw the US from the 2015 Iran nuclear deal in  Washington. (Chip Somodevilla/Getty Images)

US President Donald Trump has possibly made his worst policy mistake in announcing an end to the nuclear deal with Iran – a deal which committed the latter to abandoning its nuclear weapons programme, reducing its uranium hoard, and limiting uranium enrichment to levels far below where they can be used for making nuclear weapons.

The unravelling of the deal, which was sealed with the backing of China, France, Germany, Russia and the UK in 2015, means that a rogue President can tear up a multilateral arrangement on a whim, and for no tangible benefits. This is a lose-lose deal for all.

For Iran, this could mean another bout of economic sanctions, and the possibility of attacks on its nuclear facilities by Israel and the US. It is said to be evaluating all its options.

For the US, this means a loss of credibility in the Shia world, for dubious gains in the Sunni world. In the fight for leadership of the Muslim world, the Saudis may have temporarily gained the upper hand, but Iran, with its 80 million population (versus 32 million Saudis), and strong influence in Shia Iraq, Syria and Yemen, is not a pushover for anybody. It could also gain sympathy from a wider group of Islamists with long-term animus for the US. Just as the US attack on Iraq gave rise to murderous Islamist groups, the same could happen with Shia groups across the world.

For Europe and China, which have huge trade interests in Iran, including oil, the US decision will create unpleasant dilemmas. Europe, which is still struggling to shrug off its low-growth phase, will try to salvage the deal. It will have to consider the likelihood that its post-war benefactor has now turned rogue, and hence an unreliable partner in foreign and economic policy. For China, another major disruption in global trade will be unwelcome, given its as-yet-unfinished transition from being excessively dependent on exports to a domestic-consumption-driven economy.

European, Chinese and Russian leaders will thus try hard to salvage the nuclear deal even after the US has opted out, but a lot will depend on whether US sanctions – that could follow – will bite Iran hard. If it does, one cannot see Iran agreeing to a deal with Europe and China minus the US. In fact, Iranian leaders may well conclude that going nuclear is the only way to prevent US blackmail in future. Far from getting a better deal, the US may find that it loses whatever leverage it has in the Islamic world.

For India, the oil price flare-up will be the main concern, with possible impact on our investment in the Chabahar Port.

Worse, unstable West Asia will become even more unstable, as Iran-backed forces provoke further turmoil. Soon after the Trump announcement, Iranian forces inside Syria are said to have fired several rockets into Israel, eliciting a retaliation from the Jewish state.

The post-Second World War global power structure is being dismantled in front of our eyes. It was always going to die slowly, but Trump is hastening the change.

The decline of the US began with 9/11, which triggered a long-term investment in counter-terror operations and wars in West Asia. According to one estimate, the US has spent more than $4.5 trillion in fighting terror and the wars in Iran and Afghanistan. But by opening a new front with Iran, even if it does not result in war, the costs have only gone up. No country can retain global economic leadership if it spends so much on protecting itself.

If 9/11 and the US response to it triggered its economic decline, this attempt to make a permanent enemy out of Iran is going to accelerate the decline. We can expect the following outcomes if Trump does not pull back from the brink.

Europe will slowly delink from US leadership and chart its own path, with Germany and France providing the leadership.

China’s rise as the world’s No 2 superpower will be speeded up.

Russia and Japan will be forced to kowtow to China, now that US leadership is seen as undependable.

Indian will have to loosen its ties to the US, given its growing isolation and unreliability. Its bargaining counter with China has just gotten weaker.

Global Islamism will get a new lease of life. And Israel, which has been advocating a tougher line with Iran, will find itself more isolated than ever. Tensions with the Saudis have eased of late, and there is even talk of some political accommodation between the two, but it is doubtful if Sunni Islamists, including extremists among the remnants of Islamic State and Al Qaeda, are going to make this shift easily. For them, the US and Israel remain arch-enemies.

One can only hope that Trump’s new aggression with Iran is a bluff meant to extract concessions, but one can’t count on it. When dangerous forces are unleashed, one cannot count on the possibility that they can be put back into the bottle. The US move to get the Russians out of Afghanistan helped create Al Qaeda and the Taliban. Its attack on Iraq led to the Islamic State. One wonders what new and more dangerous forces are going to tumble out of this higher level of confrontation with Iran.

A multi-polar and more dangerous world is in the works.