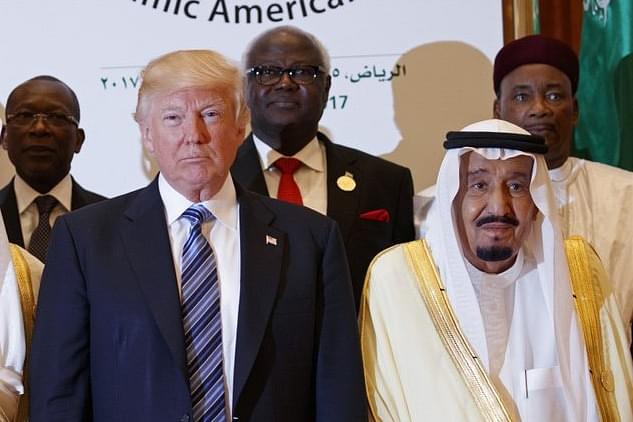 Looks like the United States and Saudi Arabia have got themselves in a tricky tangle on the disappearance of dissident journalist Jamal Khashoggi. Both are now trying to untangle the knots, trying to ensure they don’t end up with their image dented. While Washington threatened “severe punishment” on 14 October, Riyadh subtly sent across a message that its retaliation would lead to a hike in pump prices in the US – something that Washington can ill-afford.

The last 24 hours have seen more change in both nations’ stance. US President Donald Trump has backtracked to say that a rogue killer may have murdered Khashoggi. US Secretary of State Mike Pompeo is headed to the kingdom to meet King Salman, though not many are sure what message the US official is carrying to Riyadh.

First about Khashoggi. He went missing on 2 October after visiting the Saudi embassy in Turkey at noon to get a certificate annulling his previous marriage. Though fingers are being pointed at Saudi Arabia since the journalist was a critic of the royal family, Riyadh has denied any hand in his disappearance. It claims that Khashoggi left the building and vanished.

This has resulted in a hue and cry being raised globally. The US Congress is seized of the issue and there should not be any surprise if it comes up with a strong response. The US is under pressure to act against Saudi Arabia and this, perhaps, forced Trump to warn of “severe punishment”.

What has led to the cooling down of frayed tempers on both sides now? After the US talked of “severe punishment” on 14 October, Saudi hit back strong with a statement that talked of 30 potential measures against any sanction by the US. The signal was with doubt: take us on and we will hit you where it hurts the most – the US economy. This was like the classic story: doesn’t matter if we lose an eye, you will lose both.

No one could have put the issue more clearly and forcefully than Turki Aldakhil, general manager of Al Arabia news channel. He wrote an opinion piece that said:

If US sanctions are imposed on Saudi Arabia, we will be facing an economic disaster that would rock the entire world. Riyadh is the capital of its oil, and touching this would affect oil production before any other vital commodity. It would lead to Saudi Arabia’s failure to commit to producing 7.5 million barrels.

If the price of oil reaching $80 angered President Trump, no one should rule out the price jumping to $100, or $200, or even double that figure.

Aldakhil potentially warned the US that it should be prepared to pay $400 for a barrel of oil, something that could lead to global economic disaster or even see US own allies arraigned against it. He also pointed out that Saudi Arabia cannot be taken lightly, given its standing in the Muslim world and its geographical importance in the Gulf.

The opinion piece also attacked Trump’s statement a few days ago when he said Saudi Arabia cannot exist even for two weeks with the support of the US. Russia and China were ready to meet Riyadh’s military needs and Moscow could even set up a military base in the north-west town of Tabuk that borders Syria, Israel, Lebanon and Iraq. He even talked of some reconciliation with Iran.

All these have made the US to tone down its rhetoric. Though crude oil prices have hit $80 a barrel and are ranging over $81 currently, chances of a drop are bright with US set to report higher stocks in the middle of this week. Saudi Arabia has sent a shrill reminder, but its options, too, are limited to take on the US. On its part, Riyadh has assured that it will keep the energy market well-supplied.

Though analysts are surprised with Saudi’s strong response especially when it has always kept politics and economics apart, they see Crown Prince Mohammed bin Salman’s hand behind the new style of response from the kingdom, which makes up over 11 per cent of the global production of 92.6 million barrels a day.

Fuel prices across pumps in the US could increase if Riyadh, which exports 7.5 million barrels a day, cuts its supplies. On the other hand, Saudi Arabia could also be hit if user nations seriously look for alternatives such as electric vehicles or other forms of energy like solar and wind. It would also hurt its reputation as a reliable supplier that it has built in the last 35 years.

Experts point to an embargo that oil producers imposed on nations which supported Israel in the Yom Kippur war in October 1973. It hurt them badly in the long run as the affected countries resorted to measures which lowered demand.

Saudi Arabia has been supporting the US in its duel with Iran on the nuclear standoff by producing more oil. Riyadh is producing 700,000 barrels a day additionally to the 10 million barrels it had been producing until a couple of months ago. The US cannot ignore this gesture from Riyadh.

Saudi Arabia’s additional production is the key to managing the 2.5 million barrels that will be out of the global market once the US sanctions on Iran come into force on 4 November. To an extent, the surplus production has helped to hold the crude oil market on leash.

Any offensive against Riyadh could affect its commitment. Besides, the US is trying to force Saudi Arabia to solve its differences with Kuwait on a neutral production zone that can get an additional crude oil production of 500,000 barrels a day. Even this could be cold shouldered by Riyadh if Washington steps up the pressure on Khashoggi issue.

Also, as Aldakhil points out, Saudi Arabia buys 10 per cent of the total weapons that US companies produce. It also buys 85 per cent of its defence needs from the US Army. This means Riyadh accounts for a huge purchase of US arms and ammunition. It has also invested $800 billion in the US government.

What if the US is deprived of one of the top markets in the world? This, in turn, could hurt Saudi Arabia in the short term in the event of any strong action by the Trump administration. On the other hand, a rise in crude oil prices could see the US imposing anti-trust act that can affect Riyadh.

In the event of a US-Saudi face off, it is a lose-lose situation. In the impact, developing nations like India could be affected. It could even see the emergence of a new axis led by Russia and China. Probably, the US is aware of these dangers and that has resulted in the toning down of its stance.

Reports say that Saudi Arabia could be given a leeway in the form of a statement blaming an intelligence official for Khashoggi’s disappearance. But the Congress could put pressure on Trump for a stronger action. How will the US President resist the pressure is something to watch out.

The bottom line is that options for US and Saudi Arabia are limited given these ground realities. It is good that they are seeing the writing on the wall. That way, it is good for them, us and the global economy.