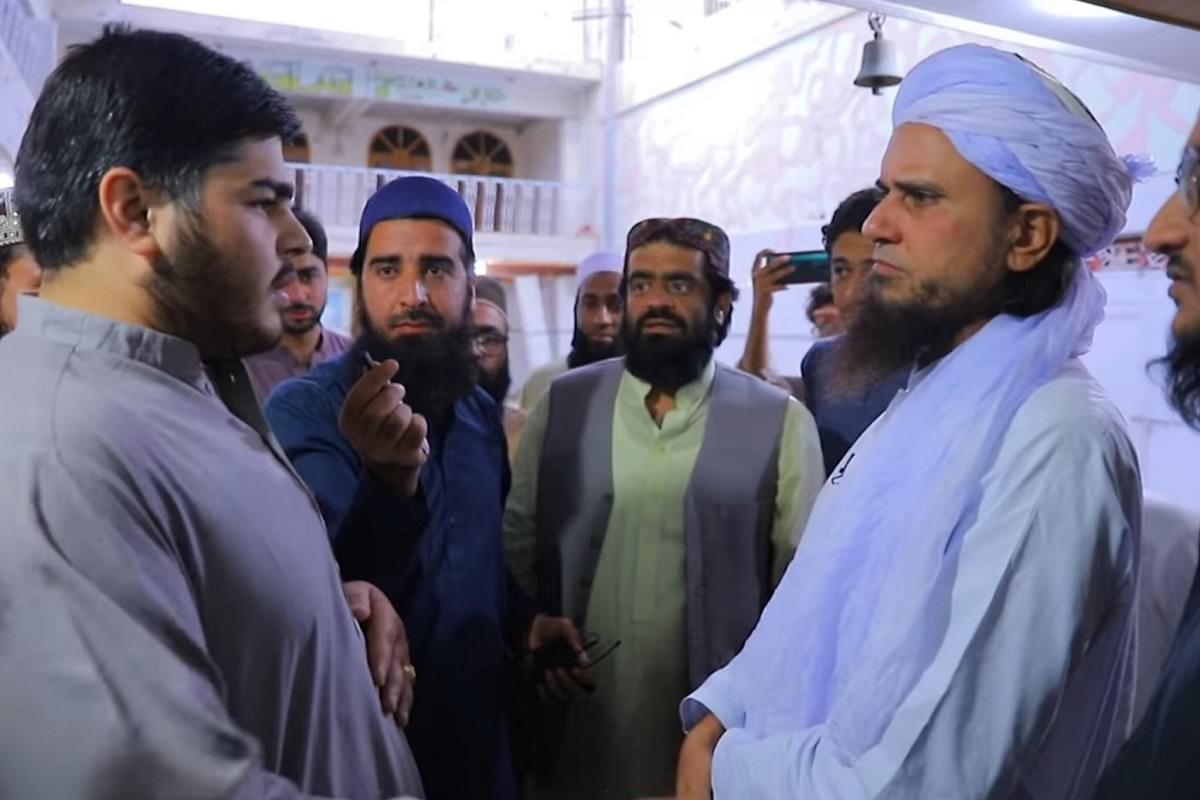 In an ugly display of brute majoritarianism, a widely followed cleric in Pakistan has made a video of his visit to a local Hindu temple where he relentlessly mocks Hindus and their religious customs.

The video, uploaded less than a week ago on the cleric’s YouTube channel that has a massive 2.5 million followers, has garnered more than 18 lakh views already.

The cleric, 45-year-old Mufti Tariq Masood, teaches at Karanchi’s Jamia Tur Rasheed Seminary, but it is on social media that he enjoys a celebrity status.

The 16-minute video begins with Masood getting out of his car in an area he says is Kalat, that falls in Balochistan. He says the spot where he is standing is where the Hindus, who are about 1 or 2 per cent of the population in the area, live.

He claims that Hindus and Muslims have been living peacefully in the area for centuries and there has never been a single case of communal violence. “So much so, that even when Babri Masjid was demolished, nobody touched the temple here,” he says.

It’s pertinent to mention that, in sharp contrast to the mufti’s falsehood, at least 30 Hindu and Jain temples were attacked across Pakistan a day after the Babri demolition took place in India. Some were razed by bulldozers, others were burnt. “Crush India”, “Death to Hinduism”, “The only solution for Hindus is a holy war" – the mobs had chanted.

Hindu colonies were pelted with stones. An estimated 70,000 Hindus migrated to India over the next few years.

You can read a Swarajya ground report about such refugees here.

Standing at the gate of the Kali Mata temple that he was visiting, Masood uses the existence of a paltry number of Hindus in Kapat to claim to his lakhs of online followers that Pakistani Muslims have “never” attacked Hindus. “I request the Hindus of India to similarly take care of Muslims,” he says.

Masood and his group now enter the temple. Masood greets the temple pujari and tells him that he looks like a Pathan (of Afghanistan origin) as he is “gota chitta” (light-complexioned). “The Hindus I have seen in my life were blacks,” says Masood.

Next, Masood tells the young pujari that the Hindu pandits he has seen on Internet are always “in neele-peele design” (clad in yellows and blues) but he is surprised to see him in “civil design”.

Masood then asks him about the reference of the word ‘Mata’ in Kali Mata temple. “Who is Mata? Is it the cow?” Masood mocks him even as the pujari explains that Hindus consider Kali Mata as a representation of mother.

Masood asks the pujari – who later shares his name as Gosain Shyamgir - where “butts” are kept in the temple. The pujari corrects the term as “murtis”. He says the murtis are very much present in the temple.

Masood then asks the pujari to look into the camera to give a message to Hindus of India to behave well with Muslims – a task that the pujari somehow tackles.

Masood doesn’t stop here. He now tells the pujari that wherever he has travelled in Pakistan, he has “always” found Hindus, Christians and Sikhs being treated well by the majority Muslims. “Why has this impression been made globally that Muslims do not treat others well in Pakistan? Has anybody ever pointed a gun at you?” Masood asks the pujari who seems to evade the question by asking someone to get water and tea for the visitors.

Masood now asks the pujari if he eats cow meat. He also asks if Hindus can marry four times like Muslims do, prompting Masood’s group to burst into laughter.

It is pertinent to mention here that Tariq Masood was caught propagating child marriage and paedophilia to a large crowd of his listeners a couple of years ago. He told his followers to marry three widows or divorcees promising that, in return, he would ensure they get a fourth bride who is a minor and a virgin.

“Mufti Tariq Masood will find you a 16-year-old or two eight-year-olds or four four year-olds,” he said in the sermon, laughing.

Sitting in the temple, Masood makes another crack at Hindus’ skin colour. “I have seen a fair-complexioned Hindu for the first time.”.

Next, the video shows Masood driving the car after leaving the temple, with an assistant for company. “We visited Kali mandar,” he says to the camera, and adds, “I wanted to ask a lot of questions regarding his [the pujari’s] religion but he could have taken offence. I wanted to ask them about their custom of burning women with their husbands. I wanted to know if it is written in their religious text.”

This video was brought to the attention of Indians by a Twitter account, @pakistan_untold. While Indian users criticised it, comments on the video on YouTube by Pakistanis have given it a thumbs up, even labelling it as a step towards communal harmony.

Hindus and other religious minorities such as Christians routinely face the brunt of being non-Muslims in a country carved out in the name of religion in 1947. They are mocked at and demonised in speeches by political leaders and religious clerics, and receive the same treatment even in Pakistan’s textbooks and cinema. If a cabinet minister calls Indians and Hindus as “gaumutra drinkers” in a public speech, Pakistan’s history textbooks calls Hindus as “thugs” and “traitorous”. If Pakistani films featuring superstars call Hindus as “ones who torture their women”, their clerics routinely spew venom at Hindus so much so that Muslims of Pakistan gather to demolish temples at the slightest call.

Tariq Masood’s viral video of his visit to the Hindu temple is only an addition to this xenophobic rhetoric.

The hatred towards non-Muslim minorities in Pakistan does not, of course, stop at xenophobic rhetoric. Minor girls are abducted and married off to much older Muslim men with collusion of religious and political leaders; men are killed on the slightest pretext. Only yesterday, a medical practitioner belonging to the Sikh community was shot dead by gunmen in Peshawar.

Hindus and Sikhs of Pakistan keep migrating to India after selling off all assets for paltry amounts, only to live in shanties as refugees. They tell harrowing tales of their persecution.