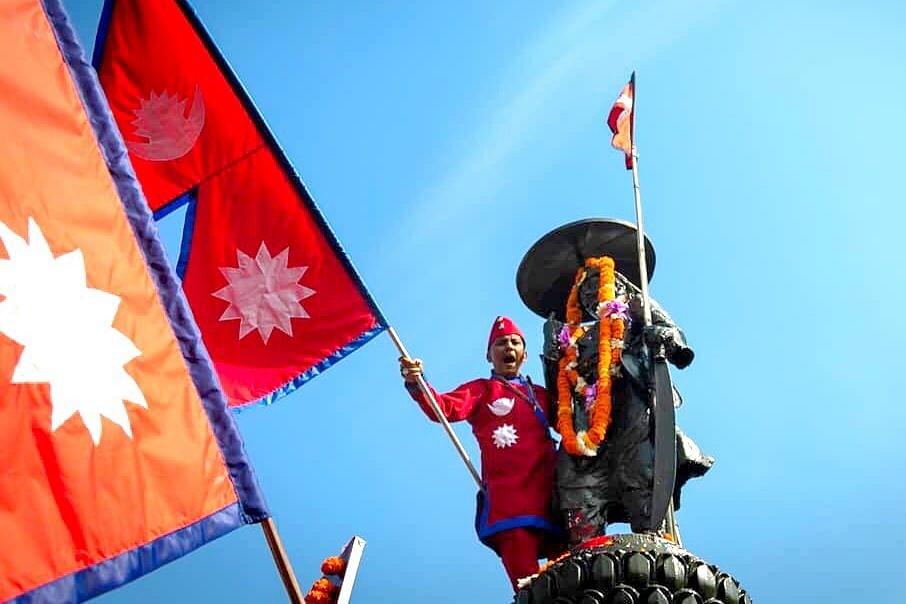 And this is triggering a demand for the restoration of the country‘s status as a Hindu nation ruled by a monarchy.

Palace intrigues following the royal massacre at Kathamandu’s Narayanhiti Royal Palace in June 2001, coupled with the messy reign of the deeply unpopular and authoritarian King Gyananedra Bir Bikram Shah Dev, led to Nepal’s monarchy being abolished in May 2008.

Now, history seems to be repeating itself in the Himlayan country with the Nepalese losing faith in the democratic process. This has triggered support for restoration of the monarchy and, more important, the country’s status as a ‘Hindu nation’.

The ruling Nepal Communist Party (NCP) is virtually imploding due to the selfish power struggles of its leaders, while the opposition Nepali Congress (NC) is in total disarray and also afflicted by the malaise of factionalism. Politicians at large are fast losing popular support and credibility.

Like King Gyanendra, who antagonised his subjects with his despotic rule, Prime Minister Khagda Prasad Sharma Oli also is fast losing the respect and support of Nepal’s long suffering masses.

Like Gyanendra, Oli is seen as power hungry, selfish and autarchic with little regard for constitutional norms and even lesser respect for his colleagues.

Oli has zero tolerance for dissent and is known to be vindictive and vengeful. And he has subverted democratic institutions and ruled like a despot in a highly whimsical manner.

Also, under Oli’s rule, Nepal’s poverty-afflicted masses have been suffering a lot. More so due to his inept handling of the pandemic and his Donald Trump-like disregard for its gravity.

The ruling NCP has fragmented with various factions led by self-serving and power-hungry leaders pulling in different directions. Like Oli, they have also lost all credibility.

The opposition NC is yet to recover from its debilitating defeat in the 2017 elections and is also afflicted by factionalism and power struggles.

NC president Sher Bahadur Deuba is widely suspected by his colleagues of having a secret pact with Oli, and that has affected his credibility.

Even the country’s President, Bidya Devi Bhandari, is facing stringent criticism over her conduct. She is being accused of kowtowing to Oli and undermining the dignity of her office.

Other democratic institutions like the police, bureaucracy and the judiciary have also been subverted by venal and self-serving politicians, thus severely affecting their credibility.

All this has given an unexpected fillip to monarchists and the Hindutva lobby which wants Nepal’s status as a Hindu country restored.

Political observers in Nepal were taken by surprise at the massive turnout in a rally organised by the pro-monarchist and Hindu nationalist Rastriya Prajatantra Party (RPP) in Kathmandu on Monday (11 January) on the occasion of the 299th birth anniversary of King Prithvi Narayan Shah.

Prithvi Narayan Shah is considered to be the founder of Nepal and is widely looked upon as the ‘Father Of the Nation’.

An ardent Hindu nationalist, he proclaimed the kingdom of Nepal as the Asli Hindustan (the true land of Hindus) since north India was then under Mughal rule.

Shah is very widely respected by all sections of society in Nepal. While Prime Minister Oli took to twitter to pay tributes to Shah, Tourism Minister Bhanubhakta Dhakal said Shah was the revered guardian of Nepalis.

But what made the headlines was the massive turnout at a rally organised by the RPP to pay tributes to Shah, whose birth anniversary is commemorated as ‘Prithvi Diwas’ in Nepal.

The rallyists, most of them clad in traditional Nepali attire and playing traditional instruments, shouted slogans demanding restoration of the monarchy and declaring Nepal a ‘Hindu nation’.

The brutal police crackdown on the rallyists drew severe and widespread condemnation from all sections of society.

Bollywood actor Manisha Koirala, who belongs to the politically powerful Koirala family of Nepal, participated in the rally and condemned the police action.

“I hope the government will respect and promote people’s desire for a common symbol of national unity. But, the government’s intention seems exactly the opposite. Is this the government of Nepalis, which deployed the police force with water cannon and tear gas on this day?” Koirala tweeted.

The RPP, which has demanded that ‘Prithvi Diwas’ be declared as ‘National Unity Day’, says that the spontaneous and massive turnout at Monday’s rally was an indication that people of Nepal want their ‘Hindu king’ to return.

The day also saw a spate of articles in the nation’s leading newspaper eulogising Shah (eg, this and this) and decrying attempts made in the recent past by the country’s communists to underplay his legacy.

This is why the statement by Nepal’s tourism minister Bhanubhakta Dhakal (a communist) terming King Prithvi Narayan Shah as the “revered guardian of Nepalis” assumes a lot of significance.

Dhakal’s statement is considered an acknowledgement of the prevailing sentiments of the people of Nepal who are fed up with the political parties, the country’s President and other democratic institutions.

“Nepalis have started comparing the present chaotic and inept rule to the reign of the monarchs. The politicians belonging to the communist parties and the Nepali Congress have badly let down the people of this country,” RPP leader S K Rana told Swarajya from Kathmandu.

Another factor that is fuelling the demand for a return to the olden days is the virtual carte blanche given by the country’s communists rulers to Christian missionaries to lure poor and gullible folks, especially in the rural and semi-urban areas, to convert.

“Large scale conversions to Christianity are going on. The (Christian) missionaries are enticing people through the lure of material gains, free education and medical treatment etc despite the existence of an anti-conversion law that is not being enforced,” said Rana.

He added: “If this (the aggressive evangelism of Christian missionaries) is allowed to continue unabated, Nepal will soon become a Christian-majority nation. Hindus are thus feeling threatened and want reversal of the measures taken in 2015 to declare Nepal a secular state. Nepal’s status as a Hindu nation must be restored to preserve the nation’s culture, traditions, values and ethos”.

Political analysts in Nepal say that many in Nepal are disgusted with the petty power struggles of politicians, especially of the NCP, and feel that the monarchy was much better.

“The way that the politicians are obsessed with power, their vanity and tendency for self-aggrandisement, the failure of many democratic institutions, and the misgovernance of the past few years, has left people disgusted and disillusioned. It is thus natural for demands for a return to the olden days to gain currency,” Surya Narayan Poudel, a political scientist, told Swarajya.

History, thus, seems to be repeating itself in an interesting manner in Nepal.