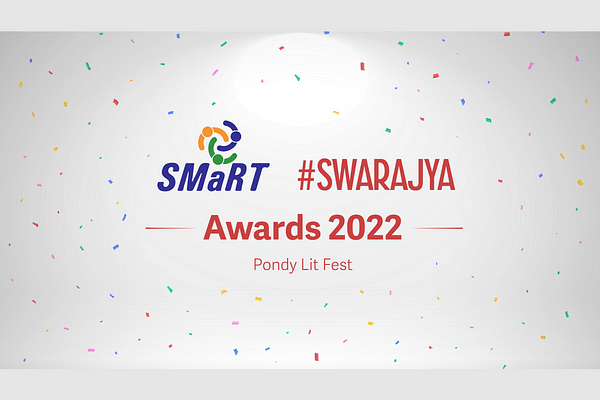 The Swarajya Awards for the year 2022, presented in association with SMaRT, have just been announced during a special session at the Pondy Lit Fest.

The awards aim to recognise the stellar work being carried out by various individuals and organisations in the fields of culture, social work, politics and economics.

The winners for this year are:

Here's a brief description of their work:

Shri K Annamalai chose the hard way to take forward a movement in a rather ideologically hostile environment, and within a short span of time emerged as an inspirational icon for the Dharmic nationalist forces in Tamil Nadu. This former police officer adored by people and affectionately called the ‘Singham’, blazed a glorious trail in his short but distinguished career as an officer — be it campaigns against drug abuse or his empathetic policing.

He responded to an inner calling that manifested during his spiritual sojourn in northern India, to take the plunge and enter public life. He has placed himself as a principal player in politics with his outstanding articulation on various issues affecting the state. He is clearly a once-in-a-generation leader who combines erudition, energy and passion to mark milestones in public service.

Swarajya is pleased to bestow on Shri K Annamalai the Dr S P Mukherjee Award for Politics for consistently striving to uphold the values of the great statesman, politician and intellectual progenitor of a uniquely Indian political philosophy.

It is sheer bhakti that is driving this shipping professional to wage a relentless battle to bring back our stolen idols. Shri S Vijay Kumar doesn’t collect art or antiques. A true karma yogi, he is just happy to see gods return home. In his own words: “When the gods decide to come home, they will choose the time and vehicle for their return. I am but one such vehicle assisting their homecoming.”

The ‘pieces of art’ that he helped bring back home proudly sit in places like The National Museum, New Delhi, and several temples across India. A researcher par excellence, his eye for detail and knack to acquire information helped him to persevere with this mission – his nishkama seva to dharma – to which posterity will be ever grateful. For the persistent effort to bring back our stolen murtis, S Vijay Kumar and his team of volunteers deserve true appreciation.

In recognition of his unparalleled commitment to recover our heritage, Swarajya is pleased to confer on Shri S Vijay Kumar the Ustad Bismillah Khan Award for Culture that is given to an individual or institution who has achieved the highest level of excellence in fields like art, culture, literature, philosophy and folk tradition.

Shri Harsh Gupta Madhusudan is engaged in an important intellectual exercise that articulates the synergy between public policy, free enterprise, geoeconomics and India’s civilisational perspective. He is a commentator who has highlighted how Dharma lays emphasis on creating wealth, with limited but important expectations from the state, thus negating the false impression that Hinduism is against wealth creation.

This precocious and prolific writer has co-authored two influential books.

The first is a book on financial derivatives (published by Cambridge University Press) and the second is the energetic and scholarly work, 'A New Idea of India: Individual Rights In A Civilisational State’ (being republished by Penguin.) It explores the inter-linkages of ancient and modern, conservative and liberal, heterodox and orthodox, including economics. He is currently writing his third book (on the India growth story) and has penned dozens of interventions over the years.

For his scholarly interventions in the area of Dharma and economics, Swarajya is pleased to present Shri Harsh Gupta Madhusudan with the Dr B R Shenoy Award for Economics, instituted in honour of India’s bravest free-market economist, who dared to challenge Nehruvian socialism.

Aramvalartha Nayagi Sevai Mayyam! is helping common people build their lives in harmony with Dharma. The Chennai-based organisation is single-mindedly working towards creating an ecosystem where people embrace the natural order of Dharma.

The group of volunteers at Aramvalartha Naayagi Sevai Maiyam, which has been inspired by Pujya Swami Dayananda Saraswati, teaches people the principles of nitya, naimittika and kamya karmas. It provides a channel to practise them, ensuring they uphold Dharma in their everyday lives.

As part of an initiative, Aramvalartha Nayagi Sevai Mayyam! has been lending a helping hand to people in the lower economic strata of Chennai, Tamil Nadu, by way of realisation and practice of Dharma. The organisation keeps Hindu practices and festivals alive by helping people celebrate Akshaya Tritiya, Navaratri, Shivaratri and Krishna Janmashtami in traditional pomp.

Their Kovil Maiyam project, driven by volunteers from local communities around temples, lends educational support for underprivileged children, works for women’s empowerment and supports the emotional well-being of the community. While generating awareness about health, the project has been helping the community take steps to preserve the environment.

Sree Narayana Guru Award for Social Work has been bestowed on Aramvalartha Nayagi Sevai Mayyam! for its services towards community welfare.