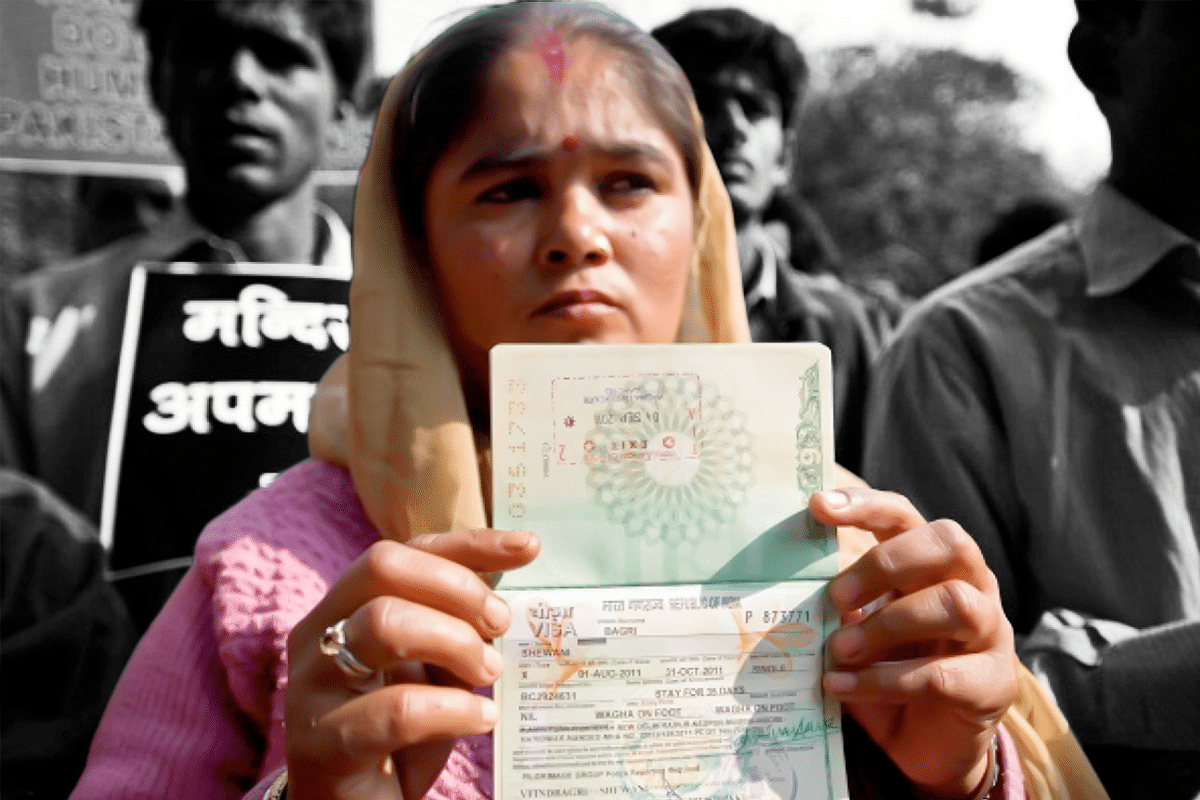 Consider this story: X is a Sindhi Hindu shopkeeper in a small town in Sindh. He has a family. He is worried. He wants to “leave” the country of his birth and migrate to India.

If he were a Syrian or a Mauritanian or a Libyan, the Leftists of the World would support him in his desire to migrate.

But since he is a Sindhi Hindu, the Leftists have no sympathy for him. Be that as it may, after a great deal of effort and several months (years?) of waiting he and his family get Pakistani passports. He then applies to the Indian embassy for visas. He lies.

He tells the Indian embassy that his family is going to India for six months in order to undertake some pilgrimages. After several months and after having submitted his itinerary and his bank statements in triplicate on five different occasions, he and his family finally get visas that are valid only for four months.

Something is better than nothing. The family leaves very quietly. Their departure has to be under the radar screen. Otherwise, someone might dispossess them or persecute them in different ways. They make it to India.

They promptly “request” refugee status and express their desire to become Indian citizens. The horror show that now starts is fascinating if it were not so sordid and sorrowful.

They are treated with scorn and disdain and are viewed suspiciously. Our great government in Delhi has given no orders to the thanedars and tehsildars of our fair land as to how to treat these refugees.

And when they have no orders, it is the bounden obligation of Indian officials to ill-treat the supplicants who appear before them. This is where the CAB (Citizenship Amendment Bill) will make a difference.

The sub-Inspectors and sub-registrars in government offices around the country are NOW aware that our great government in Delhi wants to treat these wannabe refugees well. Trust me, this alone will make a great difference.

Our favourite Sindhi Hindu shopkeeper and his family might actually start feeling a tad welcome. To my mind, that is the single most important positive outcome of the much-debated CAB.

Let’s look at the objections.

Why are Muslim refugees not on this list? The important thing to remember is that nothing changes for Muslim refugees. Those who are already in India and who are claiming political persecution will see no difference.

Relatives of the officials/leaders of the erstwhile Communist regime in Afghanistan, for instance, who make claims that if sent back, they may be killed, will continue to get whatever treatment they have been getting from Indian officialdom.

Taslima Nasreen will continue to be treated shabbily in Kolkata and quasi-shabbily in Delhi. Muslim refugees cannot make the claim that they have been subject to “religious persecution” in Afghanistan, Pakistan or Bangladesh.

I think it is well within the boundaries of common sense for us to dismiss such claims as fatuous and ludicrous. I would make one exception though. I would add Ahmadiyya Muslims to the list of refugees who can make legitimate claims to religious persecution.

Given that so many of their parents were leading lights of the Pakistan Movement, their current fate is tinged with irony, horror and tragedy. The only Pakistani scientist who won a Nobel prize was pushed around ghoulishly even after his death.

Abdus Salam’s grave was desecrated and disfigured merely because he was an Ahmadiyya. Their position in India is quite good. The Kerala High Court has ruled that Ahmadiyya Muslims are entitled to being classified as Muslims and no bigoted PIL (public interest litigation) appeal has been filed against this judgment.

I would submit that welcoming members of the Ahmadiyya community would be a win-win for India. They are all usually highly educated. Their entry would represent a net addition to our human capital. We might even import a young potential Nobel-Laureate.

Now instead of making absurd points about history, geography and culture -- all subjects that Leftists are pretty ignorant of -- I would suggest that they write to their favorite MPs (members of Parliament) to introduce an amendment in favor of members of the Ahmadiyya community.

It needs to be emphasized that India has been willy-nilly quite a welcoming place. When General Ne Win came to power in Burma (Myanmar), he promptly kicked out Indians of all religions. We took them in.

As a young boy, I remember going to “Burma Bazaar” in Chennai, where these refugees had set up shop. Many of the resettled shopkeepers were Muslims.

When Lal Bahadur Shastri signed his fateful agreement with the Sri Lankan leader Sirimavo Bandaranayake, we agreed to take in hundreds of thousands of disenfranchised “Plantation Tamils”. This group included Hindus, Muslims and Christians.

There may be a case to be made for looking at the Sri Lankan situation again. It is quite complicated though. There does not seem to be any state-sponsored problems for Sri Lanka’s Hindus and Christians.

If anything, Christians there are being attacked in their churches by Islamist radicals. Many Sinhala Buddhist leaders are regular visitors at Tirupati.

While Sri Lanka does have ethnic issues, it is hard to make a case that there is anything even remotely similar to the pressures exerted on religious minorities in Afghanistan, Pakistan and Bangladesh. Former Afghan President Karzai in one of his candid TV interviews acknowledged the pressures felt by Sikhs and Hindus in Afghanistan.

In any event, the Sri Lankan red herring should not become the excuse for not acting on what is clearly a pressing need. My use of the example of the Sindhi Hindu shopkeeper should not lead to the conclusion that the problem is only in Sindh.

The east has its share of anxious moments also. With the election of the civilized and sober Hasina, the Hindus of Bangladesh are seeing much less oppression than before. But Hasina cannot and does not control every thug in every village or small town in Bangladesh.

We cannot rule out localized persecution, especially of traditionally ignored groups like the Chakma Buddhists. And realistically, we cannot rule out the fact that Hasina’s successor may not be as benign as she has been.

Leftists who support the God-given rights of Syrian, Tunisian, Mauritanian and Libyan refugees to wander freely around Europe have a problem with Hindus, Sikhs, Jains, Buddhists, Parsees and Christians from just three countries seeking refuge with us.

Let it not be said of us that while we are willing to endlessly suck up to NRIs (non-resident Indians) in New Jersey and California, we have no time for these wretched of the earth from just three neighboring countries.

Perhaps we should support this bill for no other reason than that Leftists oppose it!

Parliamentarian Derek O’Brien has written a poignant essay on how his cousins in Karachi felt pressured to abandon their religion. If any of O’Brien’s cousins seek to hang on to their ancestral faith and ask for refuge in India, are we going to be welcoming or forbidding?

Why don’t more Christian intellectuals support this bill? Or are they so scared of Leftists and of being accused of being politically incorrect, that even common sense and a minimal sense of self-preservation escapes them? One wonders.

The conjoining of the CAB with the NRC (National Register of Citizens) has drawn a great deal of attention. The NRC is an exercise directed by the Supreme Court as the judiciary increasingly takes on executive functions in our country.

The exercise was supposed to “include” citizens in a list and simultaneously “exclude” non-citizens from the same list. It is argued that the BJP is trying to gain political brownie points with the excluded Hindus and Buddhists, through the CAB.

Since when is it wrong for a political party to seek political brownie points? That argument is quite irrelevant. The only relevant argument is that Hindus, Buddhists and Christians excluded by the NRC can seek asylum on grounds of religious discrimination.

This does not prevent Muslims excluded from the NRC, for instance from arguing that they may suffer from political persecution.

They would then just have to follow the current process, which admittedly may not be very applicant-friendly, but which is no worse than what we have in place as of now and which we have had in place for decades.

The CAB deserves the support of sensible and humane people. It would deserve our support even more if it were made Ahmadiyya-friendly.