Are Chimps Evolving Their Own ‘Religion’? 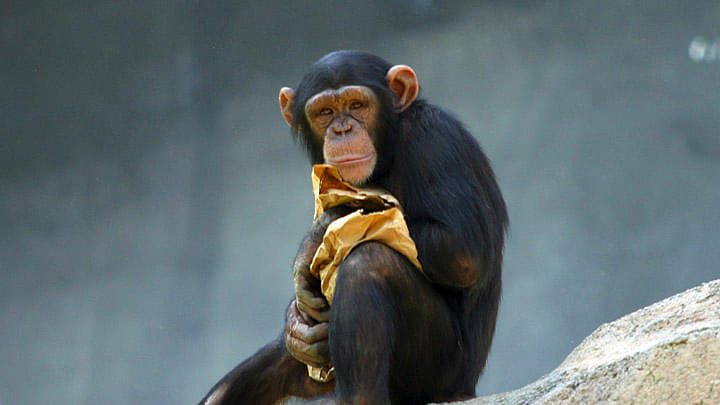 One of the dominant views on the origin of religion was articulated by a pioneer archaeologist named Gordon Childe.  According to him, it was the Neolithic revolution and then subsequently the development of agriculture and formation of villages which led to civilization.

Even religion was closely associated with economic relations in the society. Childe famously saw religion as a delusion serving to perpetuate ‘theocratic despotism’. A passionate Stalinist, he committed suicide by throwing himself off a mountain in New South Wales in 1957. Considered once as ‘the most influential archaeologist of the 20th century‘, his theoretical spirit continued to haunt and dominate the academic establishment. In his view, religion is essentially a social consciousness, and a delusional one at that. It is merely a tool for control and exploitation. Hence, it’s entirely a human phenomenon.

But new discoveries challenge the notion that ‘religion’ followed the development of agriculture and emergence of villages. The discovery of a huge religious complex, built by hunter-gatherers at Göbekli Tepe, Turkey became a ‘rock through the window of Childe’s Neolithic Revolution’. This makes us ask the fundamental question: was religion more of a primordial catalyst in accelerating human socio-cultural evolution than a superstructure built over what Marxists would call ‘production relations’?

There is an even more fundamental question: is religion unique to human species? Suppose religion is not unique to humans. Then the Marxist view of religion being a tool invented to control fellow species members goes out of the window.

Interestingly, it was the same woman who discovered the tool-making abilities of chimpanzees who also asked this question in an emphatic way. Jane Goodall changed the notion that tool-making was unique to humanity. She discovered, at Gombe National Park, chimps using tools to fish out termites.

In 2005, Goodall claimed that chimpanzees may be experiencing a feeling which we have so far considered our special domain. Years of observation of certain behavioral elements in the chimps led her to this discovery. She observed chimps making certain displays during rainfall. She also witnessed a similar display nearby waterfalls by chimps. In her own words:

Deep in the forest are some spectacular waterfalls. Sometimes, as a chimpanzee - most often an adult male - approaches one of these falls, his hair bristles slightly, a sign of heightened arousal. As he gets closer, and the roar of falling water gets louder, his pace quickens, his hair becomes fully erect, and upon reaching the stream, he may perform a magnificent display close to the foot of the falls. Standing upright, he sways rhythmically from foot to foot, stamping the shallow, rushing water, picking up and hurling great rocks. ... This ‘waterfall dance’ may last for ten or fifteen minutes.

And then she asks a very fundamental question:

Is it not possible that these performances are stimulated by feelings akin to wonder and awe? ... If the chimpanzees had a spoken language and if they could discuss these feelings among themselves, might not they lead to an animistic pagan worship of the elements?

Barbara J King, biological anthropologist and author, is also ‘agnostic’ about Jane Goodall’s suggestion that wild chimpanzees express spiritual awe or proto-spiritual awe. Barbara King’s skepticism over Goodall’s observation is interesting because she accepts that the ‘omnipresence of animals in our lives…has maintained a powerful spiritual, transcendent quality for Homo sapiens during the tens of thousands of years’.

She also states that being with animals heighten a renewed appreciation of the beauty of evolutionary continuity or a deepened sense of God’s hand in the world at work or both. In both Fisher’s theological argument and Barbara King’s view religion is something special for humans. Even when King concedes that relations with animals can evoke a spiritual feeling in humans, she is skeptical about spiritual inner states of chimps.

The subsequent discoveries seem to move in favor of Goodall’s observation.

In 2006, anthropologist Dr. Jill Pruetz, researching chimpanzee behavior in southeastern Senegal, observed another amazing display by chimpanzees in front of a savannah wildfire. She discovered the alpha male doing a fire dance directed towards the approaching wildfire ‘even as the fire sounds were quite deafening’.

Now, another study has revealed yet another interesting behavior pattern. Laura Kehoe working in the Republic of Guinea discovered some tree sites with strange markings. It was their native guide Mamadou Alioh Bah, who alerted the research team to the significance of these markings. Soon, Kehoe set up a camera trap and waited. What she witnessed was something ‘exhilarating’.

A male chimpanzee came to that specific tree, paused for a second, glanced around and then threw a stone at the tree.  It was ‘a repeated activity with no clear link to gaining food or status’ and hence Kehoe cautiously speculates that it could be a ritual. If it was not a male display (there were no female observers around), then Kehoe considers this ‘could be more symbolic’ and makes a bold suggestion: ‘…may be we found the first evidence of chimpanzees creating a kind of shrine that could indicate sacred trees’.

She points out that manmade stone collections have been found across the cultures venerating such sacred trees.

What evolutionary advantage could such ritualistic behavior endow for a species? Neuroscientist Merlin Donald defines mimesis as the ability to consciously recall and refine motor routines. In the context of observations of Baboons throwing projectiles he points out that “Baboons throw projectiles in a fight, but they don’t systematically practice and improve their throwing skill.”

It is this mimesis which he considers as the boundary line that demarcates human tool-use from that of other primate tool-use. Now the ritual behavior of chimps shows that rituals can help chimps and other primates achieve mimesis. What if this had also been our own evolutionary past?

Let us consider this sequence: the ‘spiritual’ feeling which magnificent natural phenomena like thunderstorms or a huge waterfall evoke in chimpanzees stir in them a sense of awe and wonder, in turn, trigger in them a ritual behavior pattern. Over a period of time this leads to mimesis and from there tool-making naturally evolves. If true, then human like tool usage and refinement of tool usage have their roots in ‘religion’ which need not be specific to humans.

When Albert Einstein famously said that the most beautiful experience we can have is the mysterious and that it is the fundamental emotion which stands at the cradle of true art and true science and that it constitutes true religiosity, he may not be being just profoundly poetic but also stating a fundamental evolutionary truth that cuts across species boundaries.

One cannot be overcautious in presenting these findings in the public realm. For example, we cannot claim that chimpanzees have developed a ‘religion’ at this stage. Kehoe is cautious in making such speculations. She points out that ‘we simply don’t know yet since we have not settled on one theory of what the chimps are doing’ and that ‘ it would be really jumping ahead to comment’ on these aspects.

In response to queries from Swarajya on these new findings, Laura Kehoe stated that the many traits which ‘we arrogantly assumed were uniquely human have been found in other species.’ She explained:

We are not alone in our ability to feel joy or sorrow, mourn the loss of a loved one, act in altruistic ways, solve complex problems or hold unique personalities. But are we the only species with a sense of the sacred? The spiritual? Goodall has witnessed chimps performing a specific kind of swaying dance around large waterfalls, in thunderstorms, and during heavy rains. This dance suggests a sense of ceremony and appreciation of the natural world, which as Goodall speculates, might be “related to awe and wonder…”

Clearly such disappearing boundary lines have implications: ecological, ethical and legal. She makes a passionate plea for inter-species empathy from the humans:

Realising that we are not so different from the rest of the animal kingdom could have profound implications on how we treat our closest living relatives. Is it acceptable to continue to carry out invasive medical trials? Or lock up our primate cousins in zoos for our entertainment? Regrettably, we humans are unique in one glaringly obvious way: our species is destroying the natural world, and the mysteries it contains, at an unprecedented rate. In the Ivory Coast alone, due to a devastating combination of increasing human numbers, habitat destruction, poaching, and infectious disease, chimp populations have decreased by an alarming 90 percent in the last 17 years. We do not know enough about the chimps in Guinea where this behaviour was first recorded to know how much their population is declining. What we do know is, if we carry on at this rate of destruction, leading scientists warn us that chimps will be extinct in the wild in less than 30 years.

If we continue to allow chimps to spiral towards extinction, it will not only be a critical loss to the natural world, but a tragic loss to our own cultural heritage.

Surely a thought we all need to reflect upon.