Suhel Dev: Amish Brings Forth The Story Of A Hero Forgotten By Delhi Centric Historians 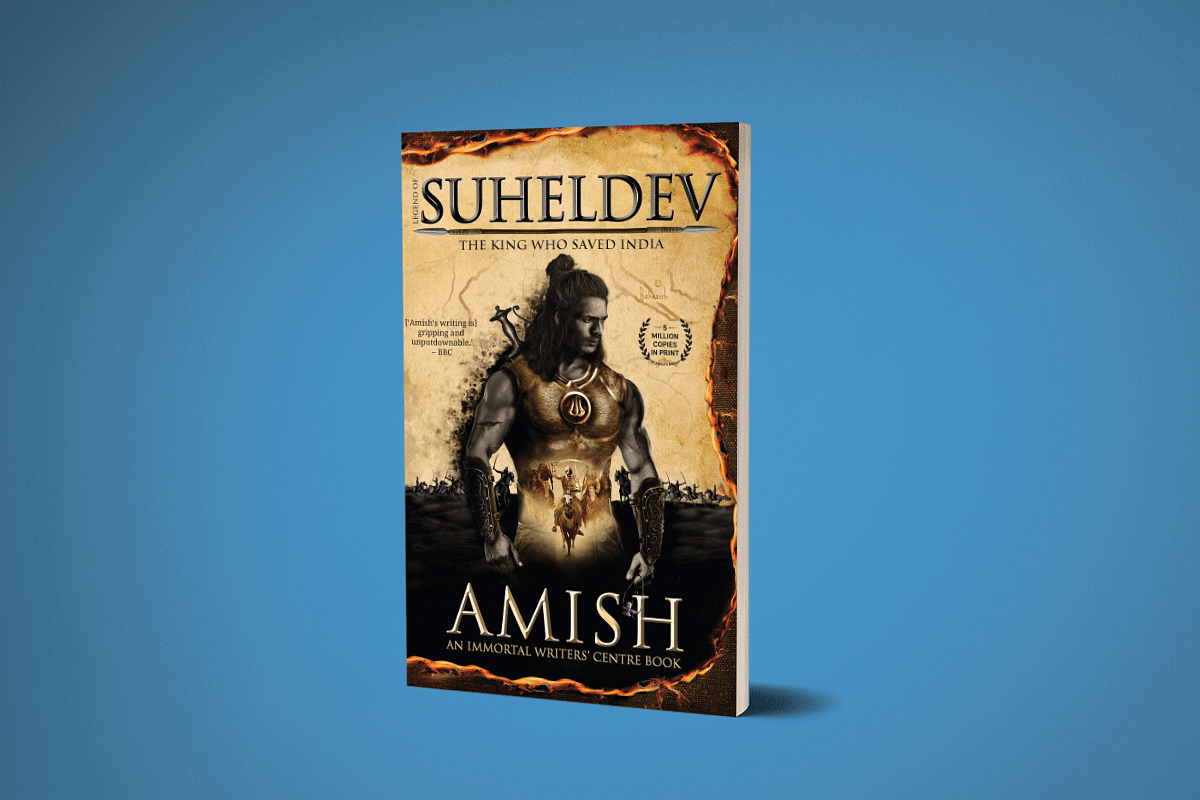 The cover of Amish Tripathi’s latest Legend of Suhel Dev – The King Who Saved India.

“Moksha can wait. Evil must be stopped first,” says Asvaghosha, a young Buddhist monk, with his eyes filled with rage, in author Amish Tripathi’s latest best seller Legend of Suhel Dev – The King Who Saved India (co-authored with a member of his Immortal Writers Centre who chose to stay unnamed).

The evil here, refers to the Turkic hordes marauding in the northern regions of ancient India, destroying and desecrating temples, monasteries, burning monks, abducting women and the list goes on.

The nature of barbaric invasions that India faced as a civilisation in the eleventh century is reflected in this laconic sentence of the monk. In this seemingly passionate statement, we see the weight of India’s civilisational importance.

Ashvaghosha probably knows that even the knowledge of the path to moksha would be lost if the invaders were not stopped even if the cost was his own spiritual seeking. What inspired the young renunciate to bounce back into mainstream life as a warrior?

In Suhel Dev, we come across an India that stood at a threshold. A threshold where on one side, were the values of historical ancestors, their mission and principles were worn with pride. A civilisation that respected even the enemy on the battlefield. A civilisation that placed codes of honour above everything.

On the other side, were the Turkic invaders to whom the quality of compassion was alien. It was a cult that revelled in desecrating what others considered sacred. A cult that did not hesitate in inflicting harm of the most heinous nature on a human being if he dared to cross their path or even breathe a word of dissent.

Then the famed Indian valour, shaurya met the amaanush himsa. (The barbarism was so bad that ancient Indian thesaurus would fall short of having a suitable term. Because even the worst comparison of rakshasa would have a limit to barbarism, but the hordes of Muhammad of Ghazni did not).

Prince Malladev of Shravasti met the Ghaznavaid hordes. The timeless Indian codes fell to the foreign monstrosity and the sacred temple of Somnath is desecrated. Or in exact words that the book says, “he broke soul of India” (when Ghaznavi hits the Somnath jyotirlinga).

The chapter does leave any reader with a vacuum along with a grim realisation that India needed to adapt to changing times. It had to cast away morals it held dear and fight off the foreign forces so that those morals could be given a second chance again, when the danger passes.

It needed a leader. A leader who was not queasy to talk to the barbarians in their own language, deal with their dead bodies in a way they feared, nor leave survivors among enemies once a clash started.

A leader who could bring a distraught Buddhist, Ashvaghosha, a rooted Indian Muslim Abdul, a lost former commander Govardhan, a spirited orphan Toshani, all under one banner, with one aim. One clear aim — to save India, even at the cost of their identities.

The story traces the trajectory of Suhel Dev, a young prince of Shravasti after the horrific death of his elder brother Malladev at the hands of Muhammad of Ghazni.

The prince understands the weaknesses of Indian civilisation, those of the kings who ruled her, some greedy, some fearful, some just too high and mighty even if all in their own imagination. Some too good for their own good like the King of Delhi who pays with his life for being too ethical.

Suhel Dev goes about uniting every warrior who believed in the civilisational soul of India enough to put her before his or her individual aims before he meets the enemy Salar Masud, the Ghaznavaid commander in the historic battle of Bahraich.

Even as the story moves ahead and gathers pace, there are conversations filled with philosophical musings, personal and ethical dilemmas and ponderings on identity that add to the richness of the narrative.

The musings and dilemma could remind the reader of similar narratives carved by literary stalwarts like S L Bhyrappa in his Saartha, set in a similar era of Indian history.

While in our curriculum, we are taught about divided Indians who fell against a united enemy, we are introduced to a different India in legend of Suhel Dev, an India where the grassroots are more united than you can ever imagine.

Where a southern emperor Rajendra Chola realises the loss of a temple at least a thousand kilometres away from his border and acts upon it.

Because he, like Suhel Dev, believes in the unity of India beyond territorial limits. My hyper imaginative mind’s eye immediately conjured the role portrayed by the yesteryear hero Sivaji Ganesan as Rajendra Chola, playing the guest role with a majestic elan. Sincerely hope that this series explores the Chola history in its upcoming novels.

In its own twists and turns, the book introduces us to a lot of forgotten warriors of ancient India’s subaltern landscape, an area largely ignored by the Delhi centric elitist historians, who wrote our high school curriculum (glorifying a ‘lower’ caste hero may not have exactly fitted into their class and they thought the history of nobility, even if the nobility was an invader, was the one that an Indian student should study instead of knowing about the sons and daughters of the soil).

The final confrontation does make you wait with bated breath as the pages turn themselves with a faster pace.

Tripathi’s initiative of founding a writers’ centre where a team can function in literary excavation of India’s real history is a game changer.

With a list of successful best sellers where the author brought gods and goddesses from a seldom visited section of a bookstore (religion) to the most visited aisles, the process repeats again now, where history, this time, the real one makes its way back to the country’s consciousness.

Legend of Suhel Dev is the first of a series of such standalone novels dedicated to exploring the untold history of India.

Even as the country is gathering herself against the pandemic and standing up to the bully nation towards the North East, a dose of this forgotten history has many lessons for us Indians to revise, digest and live on with our heads held high.

"Come to India as devotees and our motherland will open her heart for you.
Dare to come as invaders, and we will burn every single one of you."