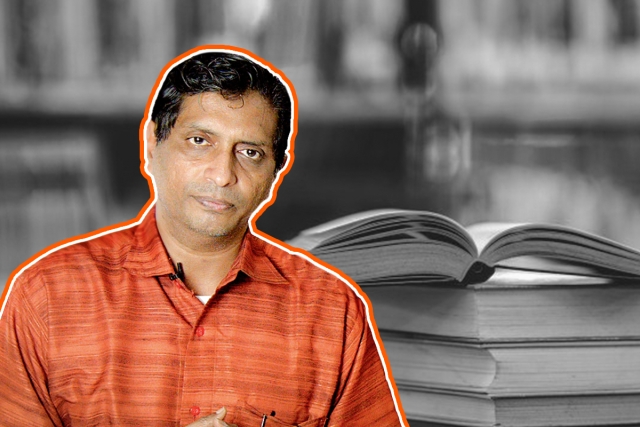 In post-independent India, Marxist historians, who have captured the citadels of academia and media with political support of the Nehruvian state, have demonised and caricatured nationalist historians of the late nineteenth and twentieth centuries.

In this book Dr Dilip Chakrabarti, one of the finest archeologists of international repute with more than four decades of field experience, sets out to show, and succeeds remarkably, how nationalism, as understood in the historic development of India's civilisational self-assertion, is an indispensable component of good historiography of ancient India.

He uncovers the methods employed by Marxist historians in creating and establishing their narrative and also brings out vividly the Bhagirathic contributions of the 'nationalist' historians.

The good archeologist also points out the kind of intellectual lineage that one has to inherit and make oneself worthy of when one calls herself a ‘nationalist’ in the context of Indian historiography. It needs complete loyalty to truth, love for the land, its culture and its people, hard work and tapas-like dedication.

Any aspect of existence, even one that we would have generally considered as trifle, can become a door to a mysterious and wonder-filled universe.

The book, Entangled Life, by Merlin Sheldrake, proves this and takes us on a voyage that is at once an expedition into both science and magic.

What one would consider as a simple mushroom emerges as a profound mystery through the pages of the book and presents us with serious questions that will alter forever the way we view the bio-cosm around us and within us.

It shows how the human-centric biases which pervade the sciences fall away as our search tools become deeper and our canvasses get larger.

This book is a treat for all those who are interested in life – whether the reader is a science teacher or an artist or a lover of the environment. Merlin Sheldrake takes us on a trip into the fascinating world of fungi and down the rabbit hole well into the wonderland and makes you realise that it has become a pilgrimage.

He also does not fail to tell us the formidable challenges panpsychism still faces.

The author feels that the ‘mystic’ or non-dual experiences which are ‘distinct’ and ‘cross-culturally pervasive’ naturally provide a fertile ground for what he calls the ‘post-Galilean paradigm’ for science.

Contrasting between the Christian theistic approach to objective moral truth, which is philosophically deficient, Goff offers the Advaitic alternative for the ‘objective moral truth’ which incidentally, resembles closely the argument both Swami Vivekananda and Dr. B R Ambedkar had made for social and individual ethics from a non-dualist point of view.

The book explores in detail how twelve important domains, from mythology to mind, which define us as species, have been shaped deeply by the kaleidoscopic celestial dome.

Throughout the book there is a subtle, even nuanced sense of melancholy over the loss of a soulful connectivity that humanity felt with the universe at large. This sense of connectivity, even oneness, has been an integral, invisible force shaping our evolution – our values, our cultures, our minds and of course our sciences.

In essence, this book is a history of science told in a refreshingly different way. It approaches science from a deep, psychological perspective and creates space for all creative human interactions with the cosmos; not just scientific but also artistic and spiritual.

It is a brilliant book that transcends the narrow boundaries of academia. Yet, even as Persia and China are mentioned, India is bypassed in the grand narrative that the book weaves. One hopes the author will be open-minded enough to rectify this deficiency in this path-breaking book.

This book deals with the Hindu phenomenon in the United States in a comprehensive and positive way, covering almost all dimensions and presenting a clear picture of the American-Hindu realm. The present book is structured like a textbook though it is not one.

Prof. Long takes a historic overview of how Hindu Dharma first came to the United States as a strong influence, right from the transcendentalists to the counter-culture and Guru phenomenon to the present-day challenges.

Each chapter comes with a summary and outline in the beginning and a set of study questions as well as a list of suggested books for further reading in the end. This structure makes the book a comprehensive guide for deeper exploration into the subject for those interested.

The book could have been a refreshing attempt to study the technology odyssey of the Indian state through the prism of her politics – including the values, visions, polity, and prime ministers that make up that politics.

The author, Arun Mohan Sukumar, achieves this to a significant extent, and yet, a binary narrative that he wants to see, where none exists, mars the objectivity.

Curiously, while the author tries to build an entire techno-worldview for Modi based on limited references that Madan Mohan Malaviya made about technology, completely ignoring the views of Dr. Syama Prasad Mookerjee. In fact, he is not mentioned even once in the book.

Dr. Kalam became famous with his popular hand book India 2020 (co-authored with Y S Rajan) for using technology for national development in major domains in a people-oriented way. The book dominated the national best-seller charts for almost a decade. It may not be a coincidence that the book mentions Dr Kalam only fleetingly, in the context of SLV and the subsequent Agni missile development.

Read the full review of this book here

This book is divided into three main parts, 1924-1980, 1980-1998 and 1998-2004, and presents the journey of the Hindutva movement through the dynamics of the relationship between Atal Bihari Vajpayee and Lal Krishna Advani.

An important aspect that the book brings out is the anti-casteism inherent in the Sangh movement from the very beginning, an aspect usually many English writers on Hindutva movement turn a blind eye to.

During the Janata experiment in 1977 not only did the Jan Sangh refrain itself from getting into the prime ministerial race, but its preferred candidate was Babu Jagjivan Ram. Had the Jan Sangh’s proposal been accepted, India would have had its first Prime Minister from the Scheduled Community.

The book on the whole is a medium for a nostalgic time-travel for those who lived through the events of the 1970s to 1990s.

It stands apart not because it takes the reader on a racy, thrilling journey through the dynamics of the mainstream Hindutva movement but also for the refreshing insights it gives into the uniqueness of the Advani-Vajpayee jugalbandi and its source of strength, pointing out that their team-work came from Hindutva which values fraternity, or to use Walter Anderson’s words, the ‘brotherhood under saffron’, over everything else.

In this latest book of hers, Romila Thapar promises to take her readers on a journey into the history of dissent in India — from the Vedic times to Mahatma Gandhi’s satyagraha and supposedly ‘places in context the recent peaceful protests against the Citizenship Amendment Act and National Register of Citizens.’

But what she actually does is recycling old propaganda lines in style and, more importantly, with authority, which stems more from her ideological network than genuine scholarship.

Consider civil disobedience, the most visible democratic form of dissent in modern times. The most comprehensive and detailed study of its traditional roots in Indian context has been done decades before Romila Thapar’s present book by Dharampal — a rebel historian in the truest sense — dissenting against the established power structures of academia and media. He based his book on empirical data.

Thapar, in her book, has ideological distortions and bias and hatred. In conclusion, setting out in a grandiose manner to reinvent the wheel, which Dharmapal had already invented in the first place, Thapar only fails and ends up distorting its shape into a square — perhaps that is what the whole agenda is all about.

The book opens a ferocious new front against Hindus through the caste libel. It draws a strong parallel, if not a connection, between social movements in the Indian society with the racism phenomenon in the US.

Wilkerson is careful enough to avoid the two main clichés which usually get associated with such works on caste, even pointing out that the term ‘caste’ comes from the Portuguese 'casta'.

The kernel of the thesis is that caste is seen as more fundamental, more primordial, diabolically more persuasive and more deeply permeating all layers of the human universe, effecting discriminatory stratification, and thus making racism a subset of caste phenomenon.

The problem here is that she conflates and confuses the colonial caste system as the same system that existed in India for thousands of years, supported by Hinduism.

To substantiate this, she presses into service false propaganda and fashion statements, and not serious research. Consider for example one of her informed sources: V.T. Rajshekar. He is not only a non-Scheduled Community (SC) person but also uses his pseudo-Dalit label to market in India the notorious anti-Semitic forgery, Protocols of the Elders of Zion – calling it Zionist Arthashastra.

Unfortunately, she even gets into the cheap thrill of misidentifying the hooked cross of the Nazis as ‘swastikas, a Sanskrit symbol linking them to their Aryan “roots". This book is just another Gospel of propaganda masquerading as the Gospel of liberation.