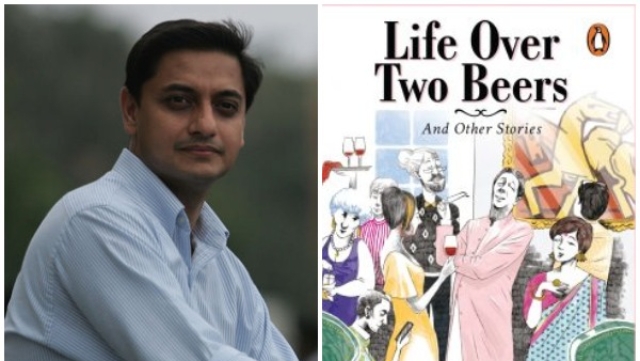 In a South Indian film I had seen in my childhood (most probably, Shankarabharanam, but I’m not sure), there is a telling scene where some young kids fooling around with modern musical instruments break into an argument and, subsequently, a bet with a classical Carnatic vocalist. The bet is, the kids would sing the piece that the maestro was rehearsing when they disturbed him, and the maestro would sing the modern song the kids were playing. Somewhat predictably yet satisfactorily, the maestro easily sings the modern song while the kids cannot keep up with their end of the challenge.

I was reminded of this movie while seeing Sanjeev Sanyal, the bestselling author of such works as Land of Seven Rivers and Ocean of Churn, transition smoothly and effortlessly into fiction with his latest, Life Over Two Beers, and Other Stories. Sanyal, who is already among India’s bestselling non-fiction writers, has tackled this relatively light-hearted project with the consummate ease of the maestro singing a modern-day tune.

A compact collection of some 14-odd short stories and a couple of poems, Life Over Two Beers has much more to offer to readers than the relatively rare feat of a non-fiction writer turning into a contemporary storyteller.

Almost all of the stories are set in modern-day India and yet as far as the basic construct of quirky characters finding themselves in tricky situations goes, this collection is firmly in the Wodehousian “Blandings Castle” series mould. A conference call goes on for three months without anyone noticing it; a building watchman spends an entire career without ever finding out the purpose of the department he served in; and a middle-aged, disillusioned journalist meets the woman he almost married once in the most unusual of circumstances. Sanyal explores the humour in these situations with wit and warmth and with never a misstep into either overt romanticism or angry cynicism.

From the used car salesman who becomes the biggest patron of art in the Delhi circles to the hardworking babu (bureaucrat) who finally realises that you have to talk to your driver (go figure!), all the characters are in the realm of everyday and yet with the slightest bit of oddities. Just an unusual decision here or there, they step into a world that is almost ludicrously surreal. As an economist, Sanyal has written at length about complex adaptive systems where even the tiniest variations can cause great changes in outcomes. In his stories, he explores and exploits the same theme with sure-footedness.

Equally remarkable is how tightly controlled the political undertones are in almost all of the stories. As the author takes us on a tour from the literary festivals to the Khan Market crowd, and from the club of intellectuals in Kolkata to five-star conferences in Mumbai, the reader can relate the fiction in the book with the real-life incidents they would have certainly come across in the news, and yet nowhere do the stories slip into an exploitative or preachy zone.

Thankfully, the author also resists the temptation to insert himself into his stories, though when you read about a Singapore bond trader having beer in a pensive mood at the end of a rough day, the author’s familiarity with the setup as well as the sentiment is easily identifiable. For most part though, Sanyal sticks to good, old-fashioned, tell-it-like-it-is storytelling. That the reader, from time to time, might root for one set of characters (for example, for the Mumbai housewife running an anonymous Twitter handle in the “Troll”) over others is just how the cookie crumbles.

Very often, Indian fiction has focused on seeing the everyday through the eyes of activists, intellectuals, and other assorted elites. In a reversal of sorts, Sanyal trains the focus on regular observers and makes them the observed, and let me tell you: some of them do not stand up to this critical examination. As someone who has spent a large part of his career either interacting with or observing the “Page 3” crowd, Sanyal’s take on their idiosyncrasies, pettiness, and myopic worldviews is as cutting and hilarious as Robert Downey Jr’s portrayal of the method acting-obsessed, narcissistic, five-time Oscar winner, Kirk Lazarus, in Tropic Thunder.

Dale Carnegie once said, “People rarely succeed unless they have fun in what they are doing.” I think behind the success of Life Over Two Beers lies the immense fun that its author seems to have gotten from writing it.

You can buy Life Over Two Beers here.