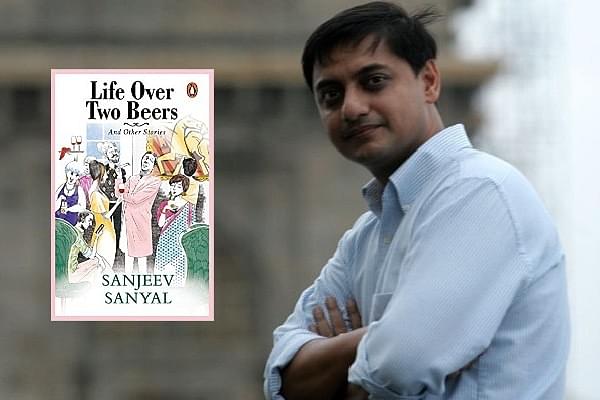 Sanjeev Sanyal needs no introduction. He is an economist and also happens to be Principal Economic Adviser to the Government of India. But that introduction doesn’t do him justice. Author of Land of the Seven Rivers and The Ocean of Churn is certainly better as an introduction. But those were works of non-fiction. We now have Sanjeev dabbling in fiction, and please spare the snide comment about his becoming interested in fiction ever since he started fashioning the government’s economic policies and defending government figures. In fact, his appended confession tells us this book has been brewing for a long time.

He says, “It will come as something of a surprise to those who have read my non-fiction writings over the years, that I started writing this book, in bits and pieces, a decade-and-a-half ago. In fact, when I first reached out to publishers circa 2005, it was to publish this book. However, no one was too keen on it and I was persuaded to write non-fiction.” Something was seriously wrong with the publishers he approached then. This publisher clearly has better sense.

Anyone who has read Sanjeev’s non-fiction books will be familiar with his ability to pay attention to the minutest detail and trivia. That trait carries over to this anthology too, which is a collection of short stories, appended by three poems. I didn’t quite understand why the three poems were thrown in. They are good, but they don’t belong. Perhaps, he should publish a separate work of poetry. That leaves 13 stories, with one of these lending its name to the book’s title. Wit, humour, sarcasm, satire, an ability to laugh at ourselves – all the stories carry this imprint. At least, 11 do. Waiting at the Time of Cow-Dust and The Return of Imagination are exceptions. In a quote on the cover, Indian author Amish Tripathi refers to Sanjeev as “a combination of a wry Wodehousian author”. True, but precisely because of that mock seriousness, I was reminded of Jerome K Jerome, and specifically, his Three Men in a Boat. There were two out of the 13 that I didn’t like as much as the others. They are serious and that element of humour is missing.

Consider Waiting at the Time of Cow-Dust. In a village, Subhadra (note the name) was waiting. Her husband was the village headman and the day before, a platoon of government soldiers had come and wanted to take her husband with them as a guide, to conduct a raid on rebel guerrilla camps. Under her husband’s leadership, the guerrillas had been kept away from the village for a long time. Since her husband hadn’t been at home, the government soldiers had taken Subhadra’s 16-year-old son (note the age) with them. He had voluntarily opted to go along as a guide. As Subhadra waited, “A group of men became visible walking up the path in the distance.” Subhadra couldn’t make out who they were. The last sentence of the story reads, “The story of Abhimanyu is so well known that I will spare the reader the details of what had happened.” Forget the humour angle for the moment. In my view, that last sentence is unnecessary and has ruined the story and the storyteller’s craft.

But 11 out of 13 is almost 85 per cent. That’s a remarkably high strike rate and I can’t think of any other contemporary writer in English who is as skilled at this kind of biting satire. There was a writer who was once asked whether real people were upset when he caricatured and satirised them in fiction. (I think it was Oscar Wilde. It certainly sounds like something Wilde would have said.) The writer’s response was, “They don’t recognise themselves in fiction.” In this collection, especially if you are from Delhi and are familiar with Delhi’s social circuit, you will have the time of your life trying to figure out the real identities of the individuals in at least three of the stories. Sometimes, there are unexpected twists at the end of the tale/tail, a bit like adult Roald Dahl stories. The more unexpected the twist, the better. There were two, where I was caught completely unawares – The Intellectuals and Drivers. I was half-expecting something of the kind in Drivers, but The Intellectuals was out of the blue. Indeed, I think this story is probably the best of the lot, provided you know a little bit about Kolkata. In case you are interested in what the government does, or pretends to do, there is The Caretaker.

Apart from Waiting at the Time of Cow-Dust, I have not revealed the plots of any of the stories. I shouldn’t. I shouldn’t spoil your fun. I recommend the book wholeheartedly. Have as much fun as I did and smile and laugh. I haven’t read such a good collection of short stories in a long, long time.