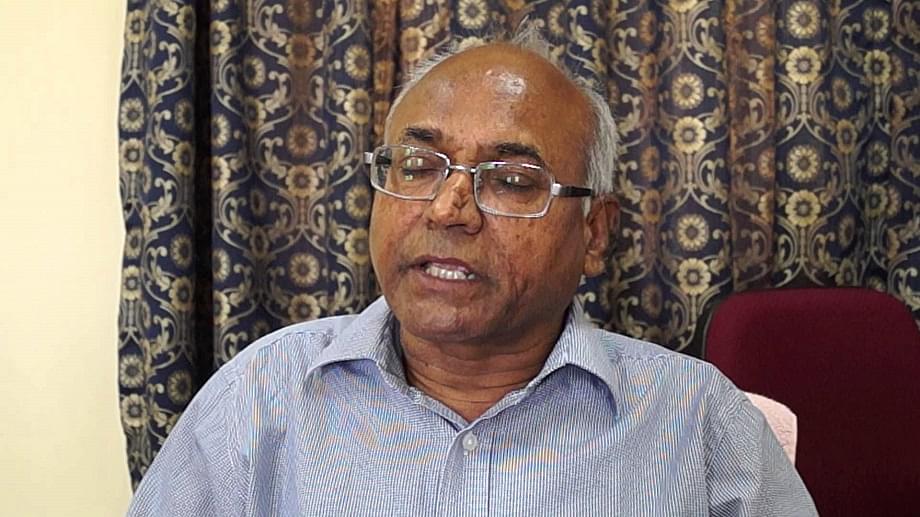 Kancha Ilaiah is controversial due to his views on Indian, and more specifically Hindu society as well as its history – both of which are very bizarre.

Kancha Ilaiah is the epitome of what one can call a controversial scholar, although the ‘scholar’ part can be debated. Nevertheless his book ‘Why I am Not a Hindu: A Sudra Critique of Hindutva Philosophy, Culture and Political Economy’ was listed as a millennium book by one of the country’s leading newspapers, “The Pioneer”.

He is at present serving as Director of the Centre for Social Exclusion and Inclusive Policy at Maulana Azad National Urdu University (MANUU) in Hyderabad. Previously he served as an associate professor in the Department of Political Science at Osmania University.

The things that make Ilaiah controversial are his views on Indian, and more specifically Hindu society as well as its history – both of which are very bizarre. He is an intellectual inspiration to many Dalit associations like the Ambedkar Students Association (ASA) and the Ambedkar Periyar Study Circle (APSC) whose members promote his ideas, calling for a civil war which will lead to the demise of Hinduism itself.

These ideas stem from Ilaiah’s ‘scholarly‘ views on Hindu traditions, most of which are elucidated in his most notable work ‘Why I am Not a Hindu’. Given below are five such scholarly views:

1. Through the pages 88-95 of his book‘Why I am Not a Hindu’, in the chapter titled ‘The Brahmanical Gods And Goddesses’, Professor Ilaiah explains how all Hindu gods have made the subduing of Dalits their primary purpose.

While Brahma is a light-skinned Aryan, Vishnu is coloured blue to represent the mixed race that might have emerged out of the cross-breeding between white-skinned Aryans and dark-skinned Dravidian Dalit-Bahujans.

Finally Shiva is shown to be dark because he resembles a “tribal” and the purpose of creating Shiva was to mislead the indigenous pre-Aryan inhabitants of India. In Ilaiah’s words –

Certainly the creation of the images of Shiva and Parvathi was instrumental in creating a consent base among the tribals….These two images were successfully used to subdue the tribals.

Most scholarly works penned by the likes of RC Majumdar and PV Kane are of the view that Hinduism is a synthesis of indigenous tribal practices and belief systems which were incorporated over a long period of time.

One wouldn’t have been surprised if these statements were made during the late 19th or early 20thcentury India by colonial historians who gave rise to the Aryan Invasion Theory.

But it is disappointing to see a scholar who prides himself as an Ambedkarite making such points since Dr Ambedkar himself debunked the Aryan-Dravidian school of thought in a scholarly manner.

2. In page 124 of the book, Iliah gives his insight into another aspect of Hindu society:

Among ‘upper’ castes, when a woman dies, if a man weeps loudly, such a man is said to be unmanly.

It is quite hard to believe that people will be concerned with someone’s manliness during a moment of personal grief. One can clearly find many cases in the past and present where ‘upper-caste’ men expressed their grief quite openly at the loss of a dear kin. It is unusual and peculiar to see one demarcating emotional reactions on the basis of caste.

3. In page-100 of the aforementioned book he gives his view on the Mahabharata:

Now of course one has the right to interpret an epic in any manner he/she wishes to but the said interpretation needs to be based on proper citations.Most readers of the Mahabharata know that the said war pits two branches of the same family against each other. The opponents practised the same religious tradition, resided in the same area, spoke the same language and shared the same ethnicity.

So Professor Ilaiah needs to state how he saw the war as Dalits vs Brahmins.

4. And this is the Professor’s understanding of Krishna:

..The Brahmins needed to project a person who could rebuild a consent system to contain the Yadava revolts. The Brahmins created an image of one who was said to have been born and brought up among the Yadavas themselves.

In no single incident did he stand by the Dalit Bahujans. It did not matter whether his beloved was a Yadava-Radha, or whether the other Gopikas were Yadavas. All his legal wives were Kshatriya women.

If Mr Ilaiah had read the Mahabharata he would have realised that Krishna was the son of Vasudeva and Devaki who belonged to the Vrishni clan of Yadavas from Mathura. And his foster-father Nanda was head of the Gokul Mandal which was one of the most powerful branches of Yadavas.

Hence Krishna was born as well as raised in a Yadava family, so again Professor Ilaiah has to mention how he came to this conclusion. Also as many students of history should know, in the medieval era Krishna as well as Rama, Shiva and the Devi were used as symbols by the Bhakti poets regardless of caste to oppose social discrimination.

That being said Kancha Ilaiah is free to believe in his interpretation.

5. Regarding the practice of cremation prevalent among most Hindus, here is the good professor’s standpoint:

Cremation  is  an unscientific  method  of  dealing  with  dead  bodies  because it  leaves  no history  in  the  form  of  fossils…Brahminism must have evolved this practice in ancient India as the Hindus killed several Dalit Bahujans who had revolted against them to destroy evidence of torture and murder….

It seems Professor Ilaiah is unaware that the Buddha himself was cremated and that cremation was a popular practice in the ancient world (unless Ilaiah believes all ancients were Brahmins).

Regarding it being scientific one of the most ardent advocates for replacing burial with cremation in the West around the late nineteenth century was Sir Henry Thompson, a surgeon and physician to the Queen Victoria, whose main reason for doing so was that “it was becoming a necessary sanitary precaution against the propagation of disease among a population daily growing larger in relation to the area it occupied”.

Now it is better to let scientific experts debate the efficacy of cremation but the view Mr Ilaiah holds that it was done to destroy evidence itself lacks the evidence to back it.  Going by that logic, even Buddhism is guilty of destroying evidence.

6. On the issue of the rising popularity of women priests trained by the Arya Samaj to regulate traditional Hindu rituals this quote from Kancha Ilaiah might interest the readers:

Turning non-Brahmin women into Sanskrit-chanting vegetarians cannot in any way be termed progress. In trying to follow in the path of Brahmins, these women are actually regressing, says Ilaiah. “I liken the Arya Samaj luring these women into their fold to ‘Hitlerite Aryanism’ where women were indoctrinated into Nazi values.

Again this sort of statement is a rehashing of the age-old but debunked Aryan-Dravidian school of thought without citing a single credible source.

In conclusion Kancha Ilaiah can hold onto any belief he wishes but one must wonder the damage that can be caused by supplanting such racist ideas in academia, where it can have negative consequences. Due to such views, many of the present day ‘Bahujan’ students view Indian history as that of a war between Aryan Brahmins and Dalits which does nothing but engender more conflicts and create more unrest.