A Prayer For This Diwali: Lead Us From Untruth to Truth 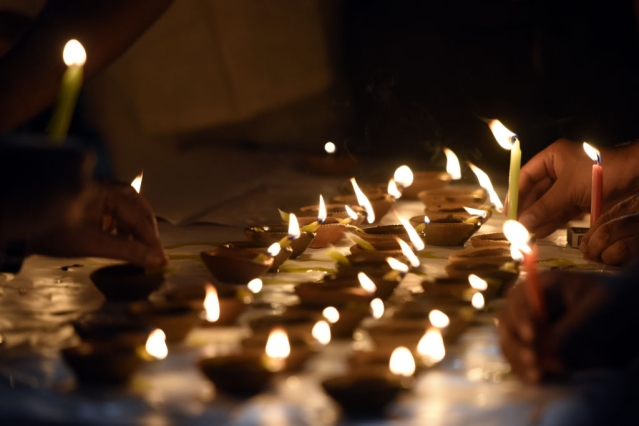 More than 2,500 years ago, a priest in Brhadaranyaka Upanishad (Yajur Veda) prayed:

Like millions of Hindus across our world, I heard and memorised this Sanskrit prayer as a child and recited it with my family during our Diwali celebrations.

I never thought much about the depths of its meaning or its significance for understanding and responding to current events.

This has changed. I have come to see this ancient mantra not only as a supplication to the divine, but also as a profound statement about ultimate values that are necessary for human flourishing.

In the absence of these values, we languish in a death-like darkness (tamas) and not prosper in the radiance of light and life (amrtam).

As I contemplated this prayer on the occasion of Diwali 2018, the opening words, “Lead us from untruth to truth (asatomasadgamaya)” gripped me with a relevance and challenge that I had never before experienced. We live in a time when truth is under assault and treated as an inconsequential, irrelevant and disposable casualty in a battle for ends regarded as more desirable.

The ardent longing of the vedic priest to be led from untruth to truth is not vigorously affirmed in our public life, institutions and leadership.

For the vedic priest, as it was for Mahatma Gandhi, truth held intrinsic and supreme value. Such a value for truth can no longer be assumed in our times.

The priest’s prayer reminds us, however, that a disregard for truth (sat) is not a neutral act. To choose truth is to be led from and to reject untruth.

To be indifferent to truth is a choice to live in untruth. Truth and untruth, sat and asat are not abstract philosophical concepts, but consequential alternatives that always confront us. In the struggle between truth and untruth, there is no neutral ground.

The vedic priest asks to be led to truth because untruth does not nourish goodness and wellbeing in our individual and social lives.

Untruth never serves the common good since there are always suffering victims, sometimes across generations. Untruth assails and overwhelms us, threatening to normalise, diminish and blunt our moral sensibilities into passive resignation.

Although we celebrate Diwali as signifying the triumph of truth over untruth, the reality today seems to be the opposite. In the battle between truth and untruth, truth is vulnerable and untruth, ascendant.

The examples are glaring and even scandalous. Only last month, a United Nations report based on over 6,000 scientific references from 91 authors across 40 countries outlined the reality and impact of global warming.

Time is running out, the authors tell us, with only 12 years left to implement measures to halt the catastrophic consequences of climate change. The scientific method is our most reliable means for investigating and understanding empirical truth.

When it presents us with well-ascertained and overwhelming truth, we respond to our detriment with untruth. Yet, this is exactly what the President of the United States did, questioning, without evidence, the veracity of the scientific studies, and speaking of unnamed reports that describe our climate as “fabulous”.

Reason (buddhi) is commended throughout the Bhagavad Gita and is regarded as having its source in the divine (12:4-5). The loss of reason is equated with death (2:63).

Truth does not triumph over untruth if we are not committed to the conclusions of rational inquiry, however much we may dislike these conclusions.

The divisive debate over the confirmation of Judge Brett Kavanaugh to the United States Supreme Court also centred on truth and untruth.

Senators who admitted the credibility and veracity of Professor Blasey Ford’s experience of sexual assault disbelieved her on the most critical of her truth claims – that the perpetrator was Judge Kavanaugh.

A circumscribed inquiry and a rush to confirmation took precedence over a patient and careful search for the truth.

Truth does not triumph over untruth when it becomes a hostage of political partisanship on any side.

The obstacles to truth are many. Whenever truth is rejected, it is always because there are interests and ends that take precedence over a concern for truth.

In the case of climate change, truth is denied in favour of economic interests that profit from untruth. In the matter of Supreme Court appointments, truth is impatiently sidelined in favour of power and influence.

The greed for profit and power, inextricably linked and unanimously condemned by ancient teachers across our religious traditions, is the altar upon which truth is today ruthlessly sacrificed.

Our altar is built with bricks of untruth and we worship there the gods of power and profit. Our value for truth is validated not by our words, but by the choice we make when confronted with truth and untruth.

Truth does not triumph over untruth as long as we value profit and power above truth.

“Lead us from untruth to truth – asatomasadgamaya,” are six profound words of prayer for the religious, but no less important for those of us who may be without religious commitments. A commitment to truth ought to unite us across religious boundaries and across the religious and non-religious divide.

Gandhi favoured the word “truth” above “God”, for its power to unite the religious and non-religious. A commitment to truth, as he so powerfully reminded us, must not ever be passive. It demands active resistance to overcome untruth and a life-long determination and dedication to the cause of truth.

Gandhi spoke of his method as satyagraha or truth-force, calling attention to truth as action that resists injustice and promotes the common good.

Truth does not triumph over untruth unless we all become agents and defenders of truth.

The late great African-American theologian James Cone wrote, “to live meaningfully, we must see light beyond the darkness”. Where do we turn today for the light of truth that frees us from darkness? Our institutions, political and economic, give us little hope that they are capable of honouring truth and the common good above self-interest.

Our religious traditions, with rare prophetic exceptions, are seduced by profit and power. My hope, in a special way, is with you, students in our institutions of higher learning.

Education is nothing if it is not a search for the truth that dispels untruth, the light that dispels darkness and promotes justice and the flourishing of all.

May the prayer of a vedic priest, 2,500 years ago, inspire all institutions of learning and all students to a renewed dedication to truth and to the struggle to overcome untruth. May the light of truth shine in each one of us.

“Lead us from untruth to truth,” is the most important message from the Hindu community to be sent to our national community on the occasion of Diwali 2018.