Joe D'Cruz: "If the poor no longer remain poor, how can these high class people make a living?" 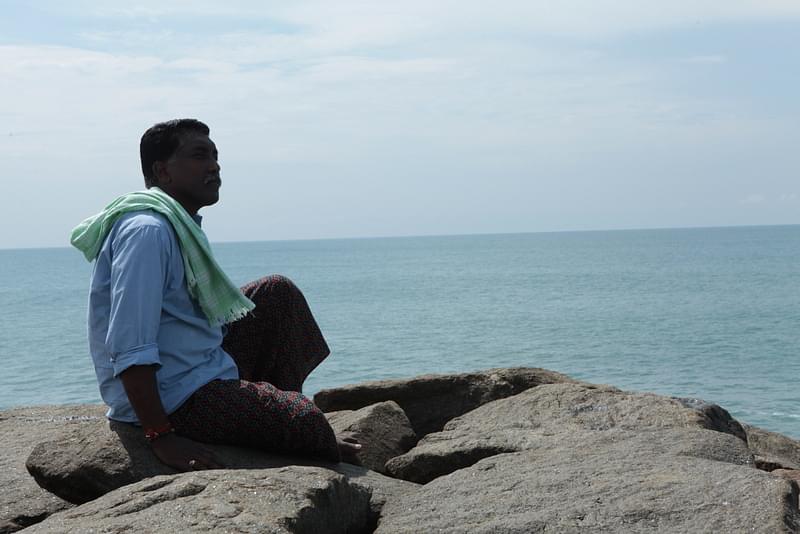 Joe D’Cruz is a Tamil writer who established his place in the Tamil literary field with his first work ‘Aazhi Choozh Ulaku‘ (‘World surrounded by Ocean’). His second work ‘Korkai’ is about the port town Tuticorin. He was the recipient of the Sahitya Akademi award in 2013 for Korkai. Joe D’Cruz has recently been in the news for being ostracized by activists for his support of Modi.

Our Contributing Editor Aravindan Neelakandan’s interview with Joe D’Cruz is reproduced below:

1. If I am right you have always been threatened with violence and an undeclared but effective excommunication. Right?

When ‘Aazhi soozh ulaku’ (my first novel) came, the first letter that came to me was from a venerable old man from a non-descript coastal village. Even as an unofficial excommunication was getting implemented silently, this venerable old man wrote: ‘May your mother be blessed for bringing out this grand literary narrative of our people’. Another letter came from Rameswaram – a coastal fisherman had requested me to come there and see their lives. Such people supported me. They invited me. They shared their problems in broken voices and soiled papers. But (those in) seats of power who were exploiting the innocence of the coastal communities went to great extent against me, from unofficial excommunication to petitioning my company higher officials. But the power of the common people and the trust and love that they gave me sustained me. So the threats never bothered me. (Getting emotional)

So at that moment I decided to dedicate my life to the cause of our coastal people…I vowed it on my Aatha (mother/goddess). The only time I went to my village was when my father died. It was for his funeral. Till then I refrained from going there because I did not want to be the cause of a rift in the village. But when I came to the village I realized one thing. Even in the village where the vested interests thought they had stranglehold, the people loved me. The love and affection I have is not limited to the boundaries of my village but(extend) to the entire coastline of Mother India. I see all the diverse coastal communities along the entire Indian peninsula as pearls of different colours garlanded at the feet of Mother India.

2. I remember youths from coastal community coming to protect you after they came to know of an attack being planned against you. Can you elaborate?

About two years back (when the) ‘Valampuri John award’ was given to me, the same elements which cry against me wanted to stop the function. At that time I started getting threatening calls. They spread the word that I would be knifed. I again decided not to come for the award function, not because I was afraid. But I know how these vested interest would use the emotions of some innocent youth of the coastal region and the boy may end up with his life shattered. So I decided not to come. But the organisers, when they came to know of this, they made all necessary arrangements that no untoward incident would happen. When a community lovingly protects you and when you are selflessly working for the people, then these threats do not affect you.

3. But unlike left-wing writers you never made fame out of these threats which were far more real than any the so-called progressive writers faced… why?

From Kannian Poonkuntanar (Sangham Tamil poet) to Paulo Coelho, there is a consistent theme. When you follow what your inner voice tells you, when you walk the path of your highest calling, nothing can harm you and the entire universe will be at your service. This is a principle I have experienced in my own life. There are people who have to get fame through real and perceived threats. But I do not need either fame or name. I seek to live for my people. I love them. I write so that they can live happily, honourably, and with prosperity. So I do not have time to go publicity hunting with these threats. Perhaps that may be the reason. Even otherwise I choose not to get fame through the threats to my life. I love even those who make such threats. They too are my people.

4. Your support to Modi brought you abuse and threats, can you elaborate on those days?

When my novels came and when I got Sahitya Academy (award) some friends, who happen to be comrades, arranged felicitations and all. I attended them. I considered them as my readers and friends. I demanded no ideological alligance from them. But when I opened my mind about support to Modi everything changed. They attacked me. A potential publisher who had promised to translate my novel, with whose translator I have worked for years spending my time and energy, went back on their word, after listing the translation in their catalogue.

People would arrange some meeting and then suddenly it would be cancelled. Well…I underwent ostracization all of a sudden. But I told such ‘friends’ one thing. You being my reader or my friend does not mean I have to be a prisoner in your ideological home. If you think I cannot voice my opinion freely just because you give your appreciation to me then please remember one thing: A writer needs appreciation. But he needs freedom more than the appreciation. Between appreciation and freedom he will choose freedom.

5. Do you think there is hypocrisy in the so-called freedom of expression crusaders when they remain tactfully silent when you are attacked.. the recent one being only the latest in a series of attacks that you have been facing silently for the last two years?

There is definitely a double-tumbler system here. There is no doubt about it. But it does not surprise me. You see … there is a socialist bourgeois here. It is a neo-Nehruvian creation. They want to picture and paint the human sufferings in the best possible colors and make a high-flying living out of it. They have to show themselves as fighters…five-star literati for the poor. They hate it when someone from the ordinary people, the real marginalized sections of the society, comes up and tells people to move on… to become prosperous, to claim their rightful and honorable place in the society. If the poor no longer remain poor, how can these high class people make a living?

The pornographers of poverty seek a pleasure out of the poverty of our people and make that a virtue. To me, on the other hand, literature speaks the soul of the people and catalyzes them to expand like the oceanic circle. So naturally these people will not come for my cause. Nor do I expect them to come. If RSS says it will wind up today, who do you think will be affected the most? It is these atrocity-literature mongers who make a living out of the urban myths of persecution. They even started inventing Hindutva in my novels once I supported Modi.

6. What about the charge that you have offended Christian faith…

Let me make one thing very very clear. I am a practicing Catholic Christian. My voice is not against Christianity or Catholic religion. My voice is against the vested interests in the organized religion which are exploiting the common people. They say Catholic Church gave us education…yes, it is true.. but where are the community leaders, and entrepreneurs and educationists who should have come from this vibrant community? They also gave us herd mentality and we need to break from that … which is not against the spirit of Jesus but in tune with what He taught.

Another problem is my emphasis on our own spiritual traditions which are far older… like the mother goddess worship which is very much in our blood.

I am today the voice of my people as the guardian of the coast of Mother India … as the owners and creators of this age old civilization… from Ramayana to Mahabharatha to every Purana my people have a role in it, they are not an imported people. They have their roots in this culture and in this spiritual tradition. The fact that I am a Catholic cannot deny this heritage of our people. I hence speak their voice.. the voice of our ancestors speaks through me.

And how can that offend any religion?

7. Evaluate Modi’s performance in one year… .

When I voiced my support for Modi I did this for three reasons: One: I have experienced the change Modi brought to resource-scarce, earth-quake ravaged Gujarat. He made Gujarat an important maritime hub. So I know this man can do miracles because he cares for the people. Two: He comes from the lower rungs of the society. He knows what is poverty. In this I share an affinity with him. So he knows it is wrong to insult and exploit the poor as much it is wrong to glorify or romantize poverty. So he will work for the common Indian. Thirdly: He has been the Chief Minister who wanted to improve his state. So he knows how the centre-state relation is an important factor in the development process. So only such a person who knows what it is to be a Chief Minister aspiring for the welfare of his state, when he becomes the Prime Minister can help the states to develop.

… and I should say I do see a sea change in this one year. There is no corruption. There is a mindset change.

When I hear cheap criticism of this man’s foreign tours I really feel offended. To be in constant travel is no joke and he is not doing that for pleasure but for the nation. He travels to strengthen relations where they exist. He travels to forge relations where they do not. He for the first time uses the Indian communities abroad to create networks. He is creating a network of economic cooperation and strategic partnership. This is a grand experiment he is doing. We should have done this long back and thank God for a Prime Minister who is at last sowing the seeds for a prosperous future India. And we cannot judge the fruits of what he sows now itself. Yet we can say here is a person who works hard for us – for you and me and our children- not taking even a single day holiday.

Things may still be not fast enough as we desire them to be. But I have my hopes for the future of our nation pinned on the chaiwala.