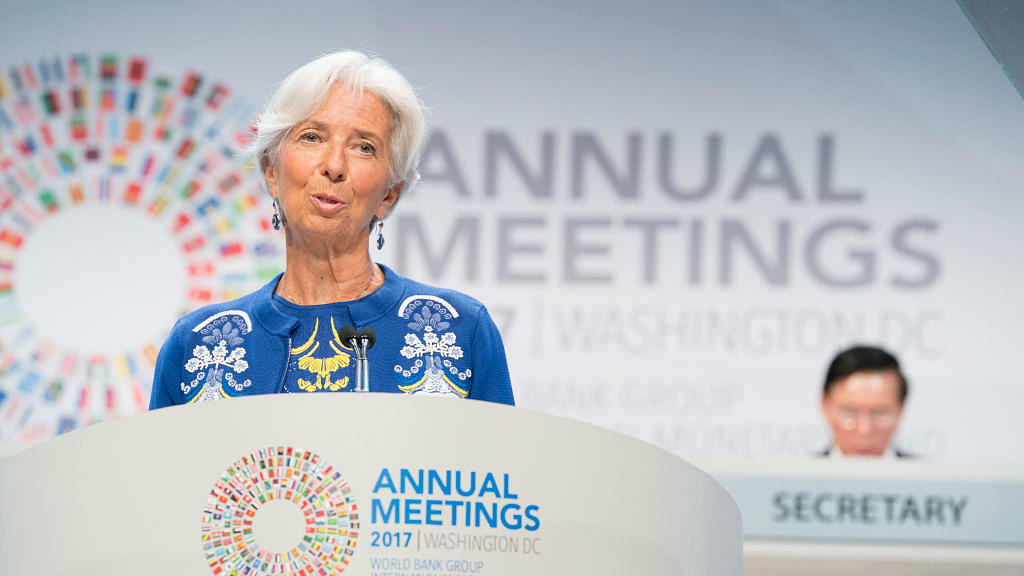 Indian Economy On Solid Growth Path, Says IMF Chief: The International Monetary Fund (IMF) chief Christine Lagarde has said that the Indian economy is on a solid growth track in the medium and long term due to the structural reforms undertaken by the government. The current slowdown is due to implementation of the goods and services tax (GST) and demonetisation is short term. The IMF on Tuesday lowered India's growth forecast for 2017-18 to 6.7 per cent from its earlier estimate of 7.2 per cent, citing lingering impact of demonetisation and transition cost to GST. But, India is expected to regain the fastest growing major economy tag next year when it is forecast to grow 7.4 per cent (slower than earlier estimate of 7.7 per cent), higher than China's 6.5 per cent. IMF also expects the Indian economy to grow 8 per cent in the medium term on the back of reforms undertaken so far.

Centre Withdraws Troops From Darjeeling Hills: In a move that could spark a major political controversy in West Bengal, the Home Ministry has ordered withdrawal of as many as 1,000 paramilitary personnel, including 300 women, deployed in Darjeeling to maintain law and order during the agitation for a separate Gorkhaland state. The ministry said seven companies of the Central Reserve Police Force (CRPF) and three companies of Sashastra Seema Bal (SSB) personnel would be withdrawn from Darjeeling from tomorrow (16 October). This decision is likely to have political implications, as Trinamool Congress is expected to launch a campaign against Bharatiya Janata Party accusing it of fuelling the Gorkhaland movement that wants to split Bengal.

Economic Slowdown Bottomed Out, Says NITI Aayog: The economic slowdown that began in 2013-14 has bottomed out and the gross domestic product (GDP) is likely to grow 6.9-7 per cent this fiscal and 7.5 per cent in 2018-19, NITI Aayog vice chairman Rajiv Kumar has said. “I think by the time you come to the first quarter of 2018, you will see a stronger recovery, and fiscal 2018-19 will be the much better year than fiscal 2017-18. And that will then continue because it will be on a much more sustained basis,” he said, adding that growth will be about 6.9-7 per cent in the current fiscal year. The economic growth slowed to 7.1 per cent in 2016-17, the year in which 87 per cent of the currency was demonetised, despite a very good show by the agricultural sector. On a quarterly basis also, the growth in the first quarter of the current fiscal has slipped to 5.7 per cent.

India Seeks Urgent Revision Of IMF Quota: India on Sunday called for urgent revision of the quota of International Monetary Fund (IMF) in favour of dynamic emerging market so as to reflect the ground realties of the world. Addressing the annual meetings of the International Monetary Fund and World Bank in Washington, he said, “there is an urgent case for revising quota shares in favour of dynamic emerging market countries in line with global economic realities to maintain fairness in the governance structure of the Fund”. He said that the IMF should make every effort to complete the 15th Review by the agreed timeline of 2019 annual meetings. Jaitley also asserted that there was never any talk by the Indian government about announcing a fiscal stimulus package for boosting the economy.

Scientists Told To Develop Zero-Pollution Firecrackers: Just days before Diwali, Union Environment Minister Harsh Vardhan has told scientists to develop zero-pollution firecrackers that do not cause health hazards to children. His comments on Sunday come close on the heels of the Supreme Court banning the sale of firecrackers in Delhi and the National Capital Region (NCR) until 31 October. Flagging off the ‘Run for Clean Air’ campaign in New Delhi as a part of the ‘Clean Air Campaign’, he said that the ill-effects of pollution cause maximum problems to children. The event was attended by around 10,000 students from various schools in Delhi and the NCR. Vardhan also administered a pledge to promote clean air. The ‘Clean Air Campaign’ was launched to create a mass movement to reduce air pollution.

Doklam Casts Shadow Over High-Speed Train Projects: In what appears to be a fallout of Doklam, an ambitious high-speed train project in south India has been delayed after Chinese railways, that completed a feasibility study a year ago, did not respond to a communique by the Indian Railways. An internal brief of the Mobility Directorate on the status of nine high-speed projects of the railways shows that the Chennai-Bangalore-Mysore corridor, a 492 km stretch, lies in limbo because the Chinese railways have failed to respond to the ministry’s communique. “The Chinese company submitted the final report in November 2016 and after that, the Chinese team has suggested for a face to face interaction. No date has been fixed from their side,” said the note prepared by the Mobility Directorate.

RSS Worker Hacked In Kerala: Another Rashtriya Swayamsevak Sangh (RSS) worker was hacked on Sunday, allegedly by Communist Part of India-Marxist (CPI-M) workers, at Muzhuppilangad near Thalassery in the politically volatile Kannur district of Kerala. According to the police, the condition of Nidesh (28), the RSS worker, was critical and he had been shifted to the Kozhikode Medical College hospital. He had suffered injuries on his hands and legs, the police said. The local Bharatiya Janata Party (BJP) unit alleged that the workers of the CPI-M, the ruling party in Kerala, were behind the attack on Nidesh. BJP is currently taking out a Janaraksha Yatra, protesting against attacks on its workers, allegedly by CPI-M workers, in the southern state.

US-North Korea Row: Diplomacy To Continue Until 'First Bomb Drops', Says Tillerson: America will continue diplomatic efforts to calm rising tensions with North Korea, US Secretary of State Rex Tillerson said and added that "those diplomatic efforts will continue until the first bomb drops". President Donald Trump "has made it clear to me to continue my diplomatic efforts," Tillerson said. Tillerson's comments on Sunday come amid soaring tensions between the United States and North Korea following a series of weapons tests by Pyongyang and a war of words between the leaders of the two countries. North Korea has conducted a series of nuclear tests in recent weeks and ago and launched two missiles over Japan.

GST Risks Losing Its Idea Of Oneness: The onus is on the GST Council to fix the glitches in the tax reform as it threatens the fundamental principle of GST: ‘One Nation, One Tax’. Tragically some of the efforts to tinker with the existing GST architecture are being masked as so-called relief measures.

What Will It Take For India To Accelerate Innovation? Failure is an essential ingredient for innovation—just look at the travails of Tesla Inc. and SpaceX chief Elon Musk. Before India can be home to the next Google, Uber or Airbnb, it needs to create the conditions for these kinds of game-changing business models to emerge and flourish.

How Borrowers Are Exploited By Banks: An internal study group of the Reserve Bank of India has found that banks manipulated the methodologies for calculating the base rate and the MCLR to either ‘inflate’ the base rate or prevent the base rate from falling in line with the cost of funds.

Cybersecurity Starts At The Top: Consumers often don’t comprehend the extent of companies’ data collection, failing to understand even the basics of the ‘cookies’ being used when they surf the web. The key to mitigating the threat posed by cybersecurity is to understand that it is also an urgent strategic issue that should be at the top of the agenda for every board and management team.

Turbulence In Officer Ranks Of The Indian Army: Comprehending A Problem That Needs Immediate Resolution: Given its resilience and unity, the Army should itself set the issues in order through a consultative approach and prove to the courts that there is no necessity of arbitration in its internal affairs.