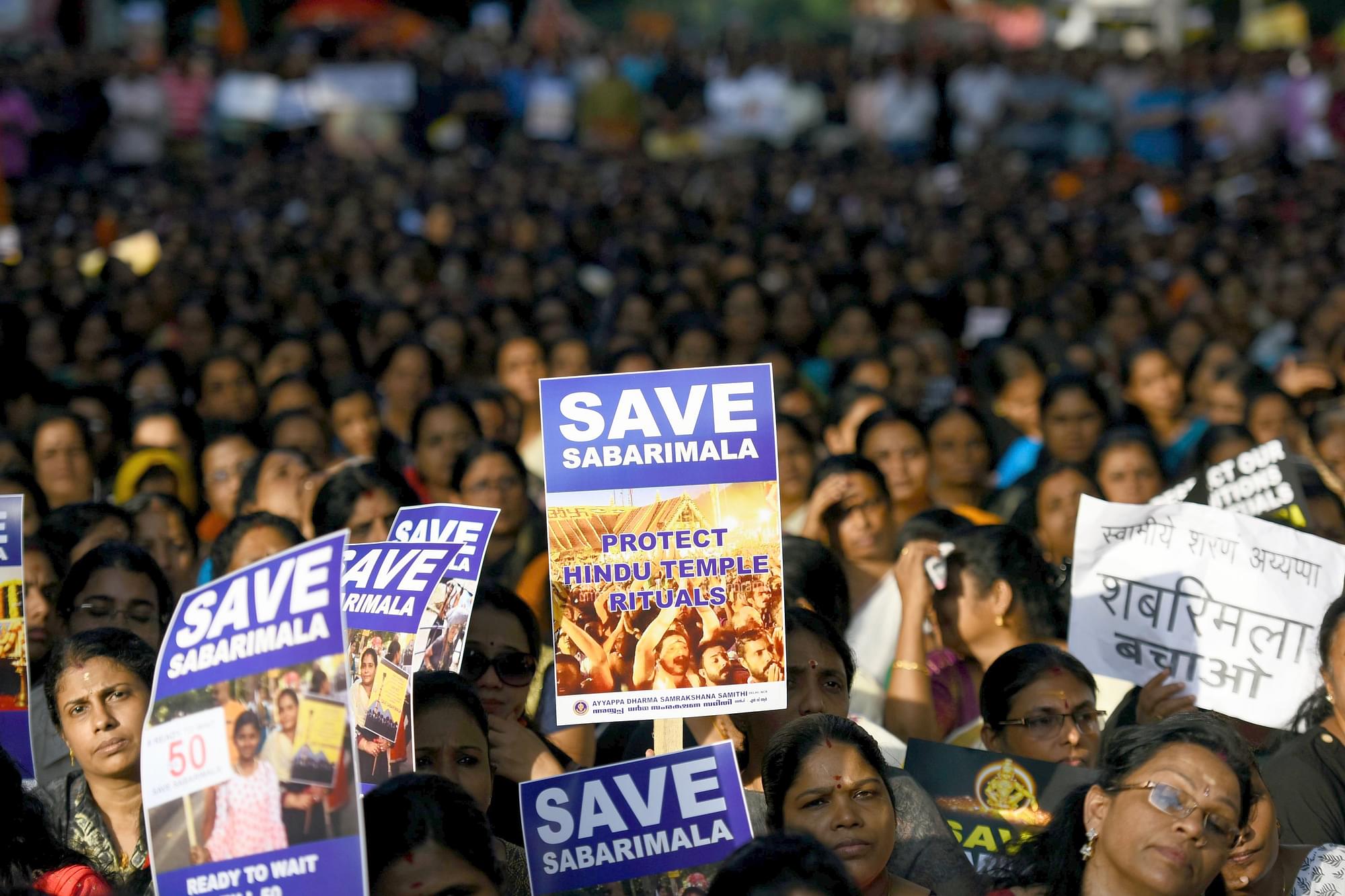 The Kerala High Court has lifted all restrictions on pilgrims imposed by the police in Sabarimala except Section 144, News18 has reported. The High Court has also nominated a three-member observer team to monitor the pilgrim season at the Sabarimala temple. The court made these decisions while hearing a slew of petitions against the deployment of thousands of police personnel near the shrine by the Communist Party of India (Marxist)-led state government.

Earlier, the Kerala High Court had criticised the state government for using excessive police force against devotees at Sabarimala under the guise of implementing the verdict of the Supreme Court regarding the entry of women of reproductive age into the shrine. It had said that the police “should normally be confined to their barracks instead of trespassing into spaces reserved for pilgrims”. In the past, the police have been seen pelting stones at devotees and vandalising their vehicles. The state government had deployed thousands of police personnel to dislodge unarmed, peaceful protesters, a majority of whom were women. The crackdown on devotees of Lord Ayyappa has continued since and over 3,345 people have been arrested.

Pakistan said on Tuesday that it will “invite” Prime Minister Narendra Modi to the South Asian Association for Regional Cooperation (SAARC) summit, Dawn hasreported. According to the daily, Pakistan’s Foreign Office Spokesman Mohammad Faisal made a remark about inviting Modi while he was speaking at an event in Islamabad. The SAARC summit, which was scheduled to take place in Pakistan in 2016, was called off after India had refused to participate in the event following the Uri terror attack. Bangladesh, Bhutan and Afghanistan had also refused to participate in the summit.

New Delhi, however, has dismissed this as “posturing”. According to the Times of India, senior government officials have said that the SAARC process has remained stalled since 2016 and Pakistan can’t decide a date unilaterally. Invites for a SAARC summit are sent only after all member states come to an agreement on the date. With India and Bangladesh set to go to polls in 2019 and the ongoing political crisis in Sri Lanka, a SAARC summit is unlikely to take place in the next few months.

The office of the French National Public Prosecutor is analysing a complaint filed by an “anti-corruption” outfit called Sherpa against the Rafale deal, The Indian Express has reported. According to the daily, the documents sent by the outfit to the prosecutor are “part of all items being analysed” by the prosecutor’s office.

Sherpa had filed a complaint against the French government and Dassault Aviation late last month asking for “opening an early investigation into the seriousness of the facts and the presumptions of the commission of the offenses reported: potential acts of corruption, granting undue advantages, trading in influence, complicity in these offenses, receiving corruption and laundering”. This development comes at a time when the Supreme Court, after a marathon hearing for which it called senior Indian Air Force officers to the courtroom, has reserved its judgement in the Rafale deal case.

The Modi government has decided to sell the ground handling arm of Air India, Mint has reported. According to the daily, the government will use the proceeds from this divestment to clear a part of the national carrier’s debt of over Rs 48,000 crore. The arm, officially called Air India Air Transport Services Limited (AIATSL), is likely to be sold this fiscal itself.

Strategic disinvestment of AIATSL will be done after the ground handling unit is transferred to a special purpose vehicle. The government will invite Expression of Interest when the transfer process is complete.

Bharatiya Janata Party-ruled Madhya Pradesh and Congress-ruled Mizoram will go to the polls today. The BJP, led by Chief Minister Shivraj Singh Chouhan, is seeking a fourth term in Madhya Pradesh. The Congress attempting to win a third successive term in the Christian-majority state of Mizoram, which is one of the five states where India’s ‘grand old party’ continues to enjoy power.

In Madhya Pradesh, over 5 crore voters will vote at 65,367 booths deployed across the 52 districts of the state to elect legislators for the 230-seat state assembly. In Mizoram, over 7,68,181 will elect representatives to 40 assembly seats.

The Right People - Dr Satyapal Singh On The Inequality Of Rights Between Majority And Minorities In Secular India: In a candid interview with MoS for HRD Dr Satyapal Singh, Swarajya asks him about India's minority policy, the problematic aspects of the Right to Education (RTE) Act, the Narendra Modi government's failure in not revising history textbooks, the reasons for the delay in launching a New Education Policy, and more.

Will Aparajita Sarangi’s Popularity Among Women In Odisha Work For The BJP? In a state where the woman is an important vote bank, Sarangi’s popularity among rural and urban women alike would bode well for the BJP.

Because Ease Of Doing Business Is Not Ease Of Filing Taxes: This government has many structural reforms to its credit. But, tax reforms and tax administration are two very important structural reforms that are not only pending but have become bigger problems in the last four and half years.

How Janam TV Is Making Waves In Malayalam Television News Space: With its coverage of ‘love jihad’, corruption and Sabarimala issue, Janam TV has established itself in a largely-left dominated news ecosystem of Kerala.