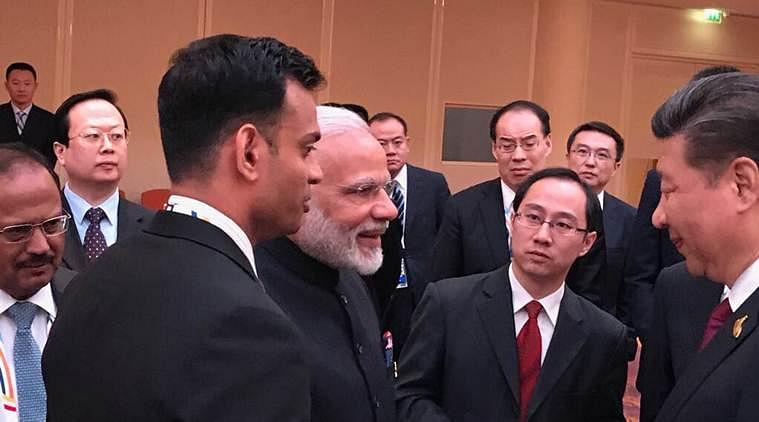 After the 73-day military stand-off in Doklam derailed ties between India and China, Prime Minister Narendra Modi and Chinese President Xi Jinping will hold an “informal summit” in Wuhan on 27 and 28 April to redefine the future relationship of the two countries. The summit was announced after talks between Foreign Minister Sushma Swaraj and her Chinese counterpart Wang Yi in Beijing on Sunday. Modi’s one-on-one meeting with Xi will come before the Shanghai Cooperation Organisation summit scheduled in June, for which the Prime Minister will travel to China again. Defence Minister Nirmala Sitharaman will also be travelling to China this week. National Security Adviser Ajit Doval was in Beijing on 12 to 13 April.

In its second and final list of candidates for the 12 May assembly polls in Karnataka, the Congress has dropped its candidate for Madikeri, HS Chandramauli, who represented fugitive diamantaire Mehul Choksi (Nirav Modi's uncle) as his lawyer. The party has decided to nominate Kodagu Zilla Panchayat member KP Chandrakala from the seat. Earlier, Congress’ decision to give a ticket to Chandramauli has created a rift in the party. While Karnataka media coordinator Birjesh Kalappa had questioned the move openly, leader Napanda Muthappa had resigned from party membership and had announced his decision to contest from the seat as an Independent candidate. The party, in its latest list, has replaced candidates in six other constituencies.

The Indian Space Research Organisation (ISRO) is set to launch a number of satellites for military use this year. The agency, which has launched military satellites in the past, will put into orbit a dedicated satellite called GSAT-7A for the Indian Air Force (IAF) in September and an advanced remote sensing satellite called RISAT-2A for surveillance purpose by the end of the year. In 2013, ISRO had launched GSAT-7 (Rukmini) for the Indian Navy. With its 2,000 nautical mile ‘footprint’, GSAT-7 has helped the Navy keep an eye on activities in the Indian Ocean. IAF’s GSAT-7A will help it interlink different ground radar stations, airbases, fighter jets, drones and Airborne Early Warning and Control aircraft. As the IAF moves towards network-centric warfare, communication support from a satellite becomes essential.

Twitter co-founder Biz Stone has invested in a Delhi-based healthcare startup known as Visit. The startup’s application uses an artificial intelligence-based digital assistant to provide help to patients in accessing consultation from doctors. Founded in 2016, the startup was pitched to investors as the country’s first AI-integrated health application. This attracted Stone’s attention, who reportedly wants to contribute to a future where AI is seen as a "positive enhancement of humanity". Visit provides its users with a pool of medical specialists to choose from for consultation. Stone is one of the three Silicon Valley-based investors in the startup.

Mahindra Ties Up With Meru For E-Vehicle Project

Mahindra Electric and cab service provider Meru have tied up for a pilot electric vehicle project in Hyderabad. As part of the project, Meru will deploy a fleet of eVeritos, the all-electric sedan manufactured by Mahindra. The project, if successful, will be replicated in other large cities of the country.

“This is definitely going to make it easier for the city to adopt EV technology and will also be in line with our constant endeavour to make EVs more accessible to a larger urban population,” Mahindra Electric head Mahesh Babu said.

Over 1,300 Women To Perform Haj Without Male Guardians

In a first, around 1,300 women from the country will perform Haj without the company of a 'mahram' or male guardian. The Modi government has removed the restriction that made it compulsory for women to travel with a male relative or guardian. Union Minister of Minority Affairs Mukhtar Abbas Naqvi said women Haj assistants will be deployed to help women pilgrims and monitor facilities provided to them, adding that this too was a first-time feature for the country.

The Rising Risk Of Global Debt Addiction: Lack of macro policy space due to stretched balance sheets will lead to higher loss of output in case of financial stress.

Making Water-Smart Energy Choices For Development: With water supplies strained, the shift to a water-smart approach to energy could not be more urgent.

Kathua Ground Report: Why Villagers Are Not Convinced On Fairness Of Probe: In the most comprehensive ground report of Kathua case so far, we bring you facts that raise many questions on the chargesheet filed by J&K crime branch.