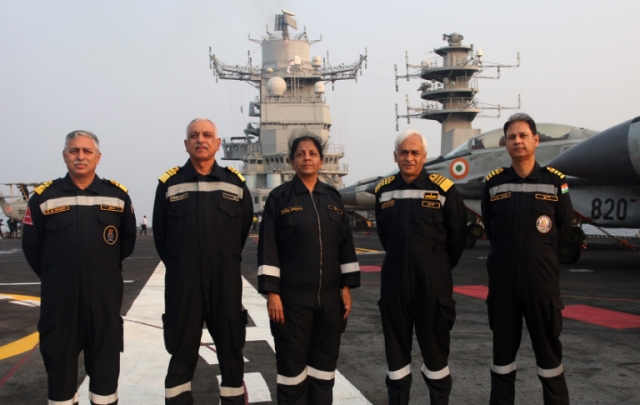 Indian Navy Capable Of Defending Nation Against Any Threat, Says Sitharaman: Defence Minister Nirmala Sitharaman said on Tuesday that the Indian Navy is “fully capable” of defending the country against any threat. She presided over India’s show of naval might, off the western coast on Monday and Tuesday, in which more than 10 warships, including aircraft carrier INS Vikramaditya, three submarines and various types of naval aircraft participated in operational manoeuvres, the Defence Ministry said. Sitharaman also presided over multiple complex naval operations including air interceptions, missile, gun and rocket firing, ship-to-ship replenishment, night flying and anti-submarine warfare. “Having witnessed first-hand the prowess of the Western Fleet, I am confident that the Indian Navy is fully capable of defending the nation against any form of threat,” she said.

New Industrial Policy In Few Months, Says Suresh Prabhu: Commerce and Industry Minister Suresh Prabhu said on Tuesday that the new industrial policy which seeks to promote emerging sectors will be released within a few months. The proposed policy, the draft of which has been prepared by the ministry, will completely revamp the Industrial Policy of 1991. Among other things, it would endeavour to reduce regulations and bring in new industries currently in focus. The Department of Industrial Policy and Promotion in August last year floated a draft industrial policy with the aim of creating jobs for the next two decades, promote foreign technology transfer and attract $100 billion foreign direct investment annually. Prabhu also chaired a meeting of the task force on artificial intelligence (AI). The 18-member task force was constituted to explore possibilities to leverage AI for economic transformation.

Bullet Train Project: Gujarat Begins Land Acquisition Process: The Gujarat government has initiated the process of acquiring land for the Ahmedabad-Mumbai bullet train project. The state Revenue Department has issued preliminary notifications for 45 villages falling within the jurisdiction of Kheda, Anand, Ahmedabad, Valsad and Surat districts and declaring its intention to acquire land for the “public purpose”. According to sources the department is also preparing to issue similar notifications for 27 more villages. The foundation stone for the project was jointly laid by Prime Minister Narendra Modi and his Japanese counterpart Shinzo Abe in September last year. Japan is providing financial and technical assistance for the project, estimated to cost around Rs 1.08 lakh crore. The Centre has set up a three-tier system to monitor the project. Niti Aayog vice-chairman and a special adviser to the Prime Minister of Japan would together be the overall top authority to take stock of the progress.

Shut Madrassas As They Encourage Students To Join Terrorist Ranks, Says Shia Body: Prime Minister Narendra Modi was urged by the Shia Central Waqf Board to shut down madrassas in the country, alleging that education imparted in these Islamic schools encouraged students to join terrorist ranks. The Shia body demanded that madrassas be replaced by schools affiliated to the Central Board of Secondary Education or the Indian Certificate of Secondary Education which will offer students an optional subject of Islamic education. The board suggested that all madrassa boards should be dissolved. Shia Central Waqf Board chairman Waseem Rizvi said that the employability of students passing out from madrassas was very poor at present and they do not get good jobs. He alleged that funds to run the madrassas were also coming from Pakistan and Bangladesh and that even some terror outfits were assisting them.

Telecom Commission Backs Raising Spectrum Holding Limit: The Telecom Commission (TC) on Tuesday approved the Telecom Regulatory Authority of India’s (TRAI) recommendation to relax spectrum holding limits, which will ease the merger and acquisition process among telecom firms and sale of radio waves by debt-hit companies. TC agreed with the TRAI suggestion to lift the ceiling on spectrum held by mobile operators within a particular band. The regulator also suggested a 50 per cent cap on combined radiowave holding in efficient bands like 700 MHz, 800 MHz and 900 MHz. According to current rules, no mobile service provider can hold more than 25 per cent spectrum in a circle and more than 50 per cent in a frequency band. TRAI had also suggested increasing the overall holding limit to 35 per cent from 25 per cent. The commission has also approved the Inter Ministerial Group (IMG)'s suggestion for extension of the time period for payment for spectrum bought in auctions by operators, to 16 years from the current 10 years.

India Rejects US Solar Claim At WTO: India hit back strongly at latest US legal assault on its solar power policies at the World Trade Organization (WTO), rejecting an American legal claim and exploring possible new protection of New Delhi’s own solar industry. Last month, the US triggered a new round of litigation at the WTO, arguing that India had failed to abide by a ruling that it had illegally discriminated against foreign suppliers of solar cells and modules. India said it had changed its rules to conform with the ruling and that a US claim for punitive trade sanctions was groundless. It said Washington had skipped legal steps, failed to follow the correct WTO procedure, and omitted to mention any specific level of trade sanctions that it proposed to level on India, leaving India “severely prejudiced”. India would be vindicated if the proper process was followed, it said.

Saudi Increases India’s Haj Quota By 5,000, Says Naqvi: Union Minister Mukhtar Abbas Naqvi said on Tuesday that Saudi Arabia has hiked India’s Haj quota by 5,000, the second hike in two years, taking the number of pilgrims who can perform Haj from the country to 175,025. The Minority Affairs Minister attributed the increase to Prime Minister Narendra Modi’s “growing popularity” and India’s improved ties with Saudi Arabia and other Arab nations under his leadership. “It is a record expansion after Independence. The Modi government has been fulfilling the socio-economic, religious needs with honesty, without appeasement politics,” he said. Naqvi claimed that the increase over the past two years – of nearly 40,000 – is a “record expansion” since Independence. The increase in India’s quota will be effective from Haj to be held later this year. Saudi Arabia last year increased India’s quota by 35,000. In 2017, the Haj quota was 170,025.

Relief For Indians As US Drops Draconian H-1B Visa Proposal: In a breather for foreign tech workers, particularly Indians, the Donald Trump administration announced it was not considering any proposal that could force deportation of hundreds of thousands of H-1B visa holders by denying them extensions beyond the maximum permissible period of six years, as they waited for permanent residency. The announcement by the US Citizenship and Immigration Services (USCIS) came days after reports emerged that the Trump administration was considering tightening H-1B visa rules that could lead to deportation of 750,000 Indians. "The agency is considering a number of policy and regulatory changes to carry out the President’s Buy American, Hire American Executive Order, including a thorough review of employment-based visa programmes," Jonathan Withington, chief of media relations at the USCIS, said.

Metro Matters: How New Partner London Can Help Delhi Ride Better: Indian cities are asphyxiating with traffic congestion and it hasn’t helped that in the last 20 years, the number of cars has gone up five times while the number of public buses increased by only 25 per cent.

Narrative Of The Forked Tongue: The practice of triple talaq was a clear violation of the Holy Quran. From Shah Bano to triple talaq, lies and deception are being used to cheat women of rights. It won’t work.

Electoral Bonds: Traceability Along With Protection For Donors: An electoral bond is a practical solution needed to institutionalise larger payments through the banks making it traceable and compliant, while ensuring anonymity to the donors.