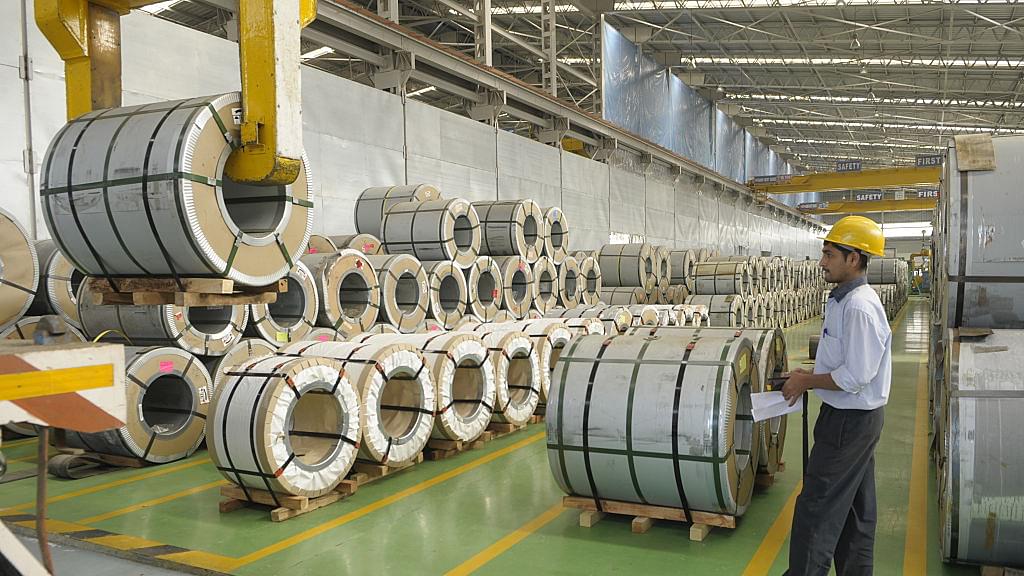 Steel rolls at the Posco-Indias processing centre in MIDC Talegaon at the outskirts of Pune. (ABHIJIT BHATLEKAR/Mint via GettyImages)

New Industrial Policy On Way: The Commerce Ministry on Tuesday said that it has started the process of drawing up a new industrial policy, which is aimed at making India a global manufacturing hub. It is expected to be released in October. Department of Industrial Policy and Promotion (DIPP), which works under the Commerce Ministry, said the government wants to formulate “an outcome oriented actionable industrial policy that provides direction and charts a course of action for a globally competitive Indian industry which leverages skill, scale and technology.” Commerce and Industry Minister Nirmala Sitharaman will hold talks with stakeholders, including industry captains, think tanks and state governments in Chennai, Guwahati and Mumbai to finalise the policy.

Rs 92,283 Crore GST Bonanza: India’s new goods and services tax (GST) revenue mop-up drive got off to a bumper start, with Finance Minister Arun Jaitley saying on Tuesday that taxes worth Rs 92,283 crore were collected in July from just 64.42 per cent of the total taxpayer base. The collections so far are in excess of the Finance Ministry’s internal estimate of Rs 91,000 crore. Of this, as much as Rs 14,894 crore has come in from the Central GST (CGST), Rs 22,722 crore from State GST (SGST), Rs 47,469 crore from Integrated GST (IGST) and Rs 7,198 crore from compensation cess levied on demerit and luxury goods. The deadline for filing first monthly return and payment of taxes under the GST ended on 25 August.

I-T Department Seeks Rs 32,320 Crore From Hutchison Over Vodafone: The Income Tax Department has demanded more than Rs 32,300 crore from Hutchison Holdings in taxes, interest and penalty on the alleged gains the Hong Kong company made by selling its Indian mobile phone business to Vodafone Group back in 2007, for about $11 billion. In a local stock exchange filing, CK Hutchison Holdings has said its unit, Hutchison Telecommunications International, has been served with a tax demand of about Rs 7,900 crore, Rs 16,430 crore interest and another Rs 7,900 crore in penalty, one which the company disputes. This is the first time a tax demand on the Hong Kong firm is being raised. So far, the Indian government had been pursuing the tax from Vodafone.

Three Die As Rains Wreak Havoc In Mumbai: Heavy rains for the fourth consecutive day brought Mumbai to a standstill on Tuesday, flooding swathes of area and sparking traffic snarls in the city. Flights were diverted and movement of local trains was impeded due to the downpour. India Meteorological Department said a ‘Red’ warning had been issued for the next 24 hours for the city and adjoining areas, indicating there could be very heavy rainfall. It said the city and surrounding areas would continue to receive heavy rainfall over the next two to three days. As a precautionary measure, the Devendra Fadnavis government has advised people to stay indoors today (Wednesday). As many as three deaths were reported from different parts of the city.

Government Steps In To Check Sugar-Onion Prices: The Union government has imposed stock limit on sugar mills to keep sugar prices under control during the festive season and also enabled states to impose control measures on traders of onion in view of "abnormal rise" in its prices in recent weeks despite better production than last year. Food and Public Distribution Minister Ram Vilas Paswan said on Tuesday that stock limit had been imposed on sugar mills for the next two months. In another decision, the government also enables states and union territories to impose control measures on traders and dealers of onion to ensure its adequate availability at reasonable prices.

Modi’s BRICS Summit Dates Set: With the India-China military face-off at Doklam Plateau now over, New Delhi formally announced Prime Minister Narendra Modi’s visit to the communist country to attend the BRICS summit from 3 to 5 September. Modi is set to discuss with Chinese President Xi Jinping a whole gamut of matters relating to bilateral relations, including maintaining peace along the 3,500 km border. The announcement comes a day after China and India agreed to end the 73-day standoff at the Sikkim border that began in June. Both sides have withdrawn troops from the Doklam Plateau, a region claimed by both China and Bhutan. Bulldozers and other road-building equipment have been removed from the area, sources said, indicating that Beijing had agreed to stop plans for a new road that triggered the crisis.

RBI Set To Issue Second List Of 40 Loan Defaulters: The Reserve Bank of India (RBI) is reportedly preparing a second list of companies with outstanding loans to hand over to the National Company Law Tribunal. According to reports, insolvency proceedings will be initiated against around 30 to 40 corporate defaulters who are expected to feature in this list. The list is likely to include JP Associates, the parent company for Jaypee Infratech, along with Videocon, Jindal Steel, Shakti Bhog, Visa Steel, IVRCL, Castex Technologies, and others. Most of the large corporate defaulters in the list are expected to belong to power and infrastructure sectors. The list is likely to be released by September, reports said.

Bhutan Asks China To Adhere To Agreements: Thimphu on Tuesday called on China to adhere to the agreements it had with both Bhutan and India, and maintain status quo along the borders. A day after the standoff between the Indian Army and Chinese People’s Liberation Army at the Doklam Plateau in western Bhutan ended, Thimphu broke its silence and welcomed the disengagement by the two sides. “We hope this (the end of the face-off in Doklam) contributes to the maintenance of peace and tranquillity and status quo along the borders of Bhutan, China and India in keeping with the existing agreements between the respective countries,” the Bhutanese government said. Thimphu has always been claiming the Doklam Plateau as an integral part of Bhutan. Beijing, however, has been contesting the claim of Thimphu.

Financial Inclusion And The Right To Privacy: The Supreme Court’s recognition of a right to privacy provides the foundation to ensure that innovations such as Aadhaar are used to enhance the poor’s dignity and well-being.

Privacy And Household Finance: An RBI report has recommended that Indian households should re-allocate their investments away from gold and towards the financial markets. Given the emphasis on fintech to rejuvenate the household finance sector, a strong privacy law is a prerequisite.

Digital Platform — The New Commanding Heights? Think Facebook or Amazon or Google. Their market shares in their respective markets would qualify as markers of monopoly in the traditional economies. The jury is still out on if digital platforms tend towards monopoly – and hence whether they need to be regulated tightly, broken up or replaced by state-owned platforms.

India’s Public Health And The Looming Threat Of US Pharma Giants: India has an opportunity to squash criticism to squash criticism of global health pressure groups by issuing a compulsory licence to Pfizer vaccine. Otherwise, it would be seen as ready to genuflect to the diktats of American lobbies.

Will Breaking Up Hinduism Into Its Parts Preserve It Better Than Trying To Keep It As One? Caste remains a problem as long as we try and aggregate them into one Hindu whole. But if each caste is free to be a religion of its own kind – which is the idea of the dera – we can lose our collective guilt on caste and do the right things.