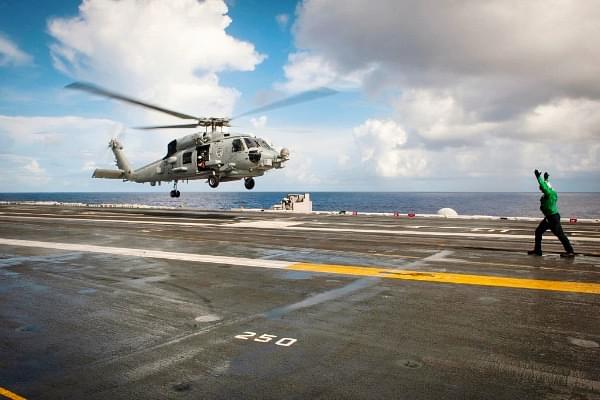 MH-60R helicopter to take off from the flight deck of the Nimitz-class aircraft carrier USS Carl Vinson during a search and rescue mission. (US Military/Flickr)

Amid a barrage of allegations of corruption from the Congress over the Rafale fighter jet deal, the Ministry of Defence (MoD) on Saturday (25 August) cleared the procurement of equipment worth Rs 46,000 crore. One of the items cleared for purchase is the Lockheed Martin-manufactured MH-60R maritime helicopter.

In a government-to-government deal with the United States (US), India will procure 24 of these maritime helicopters for around $1.8 billion. The government has also given the go-ahead for acquiring 111 Naval utility helicopters, valued at Rs 21,000 crore. This is a significant development for the Navy and government for several reasons.

One, the MH-60Rs will replace the over three-decade-old British-built Westland Sea King helicopters. The first Sea King helicopter had landed on INS Vikrant, the Majestic-class aircraft carrier of the Indian Navy, in July 1971, just months ahead of the 1971 war. India contracted for an improved version of this now-obsolete helicopter – Mk42B Sea King – in 1982. A total of 20 improved Sea Kings, called Harpoons by the Indian Navy, were delivered to India between 1988 and 1992.

Also, by some accounts, less than 10 of these submarine hunters are now operational. Many destroyers of the Indian Navy, such as the Delhi class, which can house these helicopters, were going to sea without helicopter support because of this shortage. Therefore, the Indian Navy needed a bird that could prey, and prey more efficiently.

When battle ships are deployed far away from home, these helicopters act as the eyes and ears of the crew, as other submarine-hunting platforms like Boeing P-8I Poseidon remain unavailable due to their limited range.

The Navy had decided and tried to replace its older Sea Kings for the first time in the year 2000, announcing the Multirole Helicopter contest for 16 helicopters. However, the Navy’s efforts did not bear fruit for almost two decades.

Two, the 111 light naval utility helicopters to be procured will replace around 40 decades-old Hindustan Aeronautics Limited Chetak/Allouette III helicopters currently in service with the Navy. Apart from being equipped for their primary role, the Navy also wants these helicopters to have limited submarine-hunting capability. This will be a significant capability addition in view of the heightened Chinese submarine activity in the Indian Ocean Region.

Three, as Livefist points out, this approval is also the first step towards meeting the Indian Navy’s requirement of 123 medium multirole helicopters to replace its ageing fleet. The Navy has tried to procure these earlier, several times by some accounts, but without success. These helicopters, which will cost around $3 billion, will operate off in-service aircraft carrier INS Vikramaditya, the two upcoming indigenous aircraft carriers Vikrant and Vishal, the three Shivalik-class stealth frigates, the follow-on P-17A frigates (seven in number) as well as current and future destroyer types – Delhi class, Kolkata class, and Visakhapatnam class.

These 123 helicopters will reportedly be divided into two categories. While one of the two will be a standard multi-role version, the other will be equipped with special operations. The standard multi-role version will be deployed for anti-submarine warfare, anti-surface warfare, electronic intelligence, search and rescue, external cargo carriage, and limited casualty evacuation. Those meant for special operations will be capable of carrying Marine Commandos for anti-piracy operations, combat search and rescue, and humanitarian assistance and disaster relief.

Four, this will be the country’s first project under the strategic partnership (SP) model, which is part of the larger Make-in-India initiative. Under the SP model, a foreign vendor selected to supply a piece of equipment to the Indian armed forces in four categories – fighter aircraft, helicopters, submarines, and armoured fighting vehicles or main battle tanks – will have to tie up with a local manufacturer, called the ‘strategic partner’. The original equipment manufacturer will transfer technology to the partner and set up production facilities in the country.

The successful implementation of this procurement model, whose concept was first suggested by the Dhirendra Singh committee in its July 2015 report, is likely to help develop a defence industrial ecosystem in the country. It will also give players in the private sector an opportunity to participate in some big-ticket defence contracts. Given that the government is implementing this for the first time, its future will depend heavily on the success of this deal.

For the government, which is going into a general election in 2019, the implementation of this policy will come as a major success.

With the approval for the pronouncement of 24 MH-60Rs and 111 naval utility helicopters, the number of helicopters that the Navy will be procuring has gone up to 258. This includes the 123 medium multirole helicopters.

In effect, the approval has kick-started a process which will end with the replacement of a large part of the Navy’s existing helicopter fleet. However, no one is holding their breath as the MoD has just granted an acceptance of necessity – the first step in the long and heavily bureaucratised procurement process.