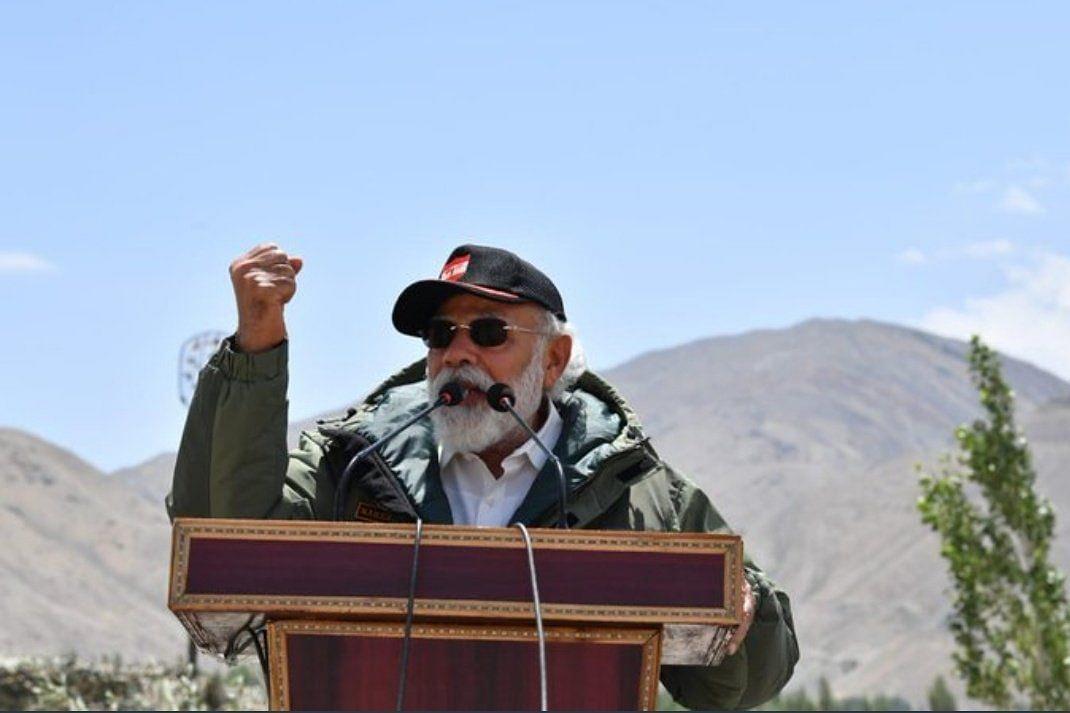 Prime Minister Narendra Modi travelled to Nimu in Ladakh to interact with Indian troops earlier today (3 July). Nimu is surrounded by the Zanskar range and is on the banks of river Indus. The Prime Minister met the top leadership of the Indian Army and later interacted with personnel of the Indian Army, Indian Air Force and Indo-Tibetan Border Police (ITBP).

Tribute To The Valour Of The Soldiers

The Prime Minister paid rich tributes to the valour of our armed forces, stating that their courage and devotion to Mother India is unparalleled. He stated that Indians can go about their lives peacefully because they know that our armed forces are standing firm, protecting the nation.

The Prime Minister said that due to the exemplary bravery of the armed forces in the recent weeks, the world has taken note of India’s strength.

Remembering The Sacrifice At Galwan Valley

The Prime Minister remembered all the proud sons of Mother India who made the supreme sacrifice at the Galwan Valley. He said that those who were martyred belong to all parts of India and epitomise our land’s ethos of bravery.

He affirmed that be it Leh-Ladakh, Kargil or the Siachen Glacier, be it the high mountains or the icy cold water that flows in the rivers, these are testimony to the gallantry of India’s armed forces. The enemies of India have seen the fire and fury of our forces, said the Prime Minister.

He also paid homage to two Matas: to Mother India and to the Mothers of all those brave soldiers and security forces of India who serve the country with unparalleled diligence.

Our Commitment To Peace Is Not Our Weakness

The Prime Minister spoke at length about how the virtues of peace, friendship and courage have been a part of India’s culture since time immemorial. He recalled that India has always given a befitting reply to anyone who has tried to disturb the prevailing atmosphere of peace and progress.

He affirmed that India is committed to peace and friendship but this commitment to peace should not be seen as India’s weakness. Today, India is becoming stronger, be it in naval might, air power, space power and the strength of our army. Modernisation of weapons and upgradation of infrastructure has enhanced our defence capabilities multifold.

The Prime Minister recalled that Indian soldiers had a long history of bravery and competence in global military campaigns, including in the two World Wars.

The Prime Minister said that the time for expansionism is over. This is the era of development. He recalled that it is this mindset of expansionism that did great harm.

He added that in the last few years, several steps have been taken for the well-being of India’s forces and furthering India’s security preparedness. This includes ensuring availability of modern weaponry, increased border infrastructure, border area development and expanding the roads network. He further shared that expenditure on border infrastructure has been enhanced three times.

The Prime Minister also mentioned the efforts to strengthen the national security apparatus and to ensure the well-being of our armed forces. He highlighted recent initiatives of the government such as creation of Chief of Defence Staff (CDS), construction of a grand National War Memorial, fulfillment of one rank one pension (OROP) after decades and steps to ensure the well-being of the families of the armed forces personnel.

Homage To The Culture Of Ladakh

During the interaction, the Prime Minister recalled the greatness of Ladakh’s culture as well as the noble teachings of Kushok Bakula Rimpoche. He described Ladakh as a land of sacrifice and a land that has given several patriots.

The Prime Minister affirmed that the people of India are inspired by the teachings of Gautama Buddha, for whom courage was linked to conviction and compassion.